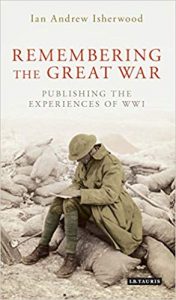 Welcome to our very first Concerning History Book Club! As with the rest of the blog, the goal here is to provide a space for us to continue engaging with history. In the case of our book club, we hope to replicate the engaging discussions we’ve had throughout the years in classes and informally with each other.

For our first discussion, Bryan, Heather, and Kevin read Remembering the Great War: Writing and Publishing the Experiences of World War I by Dr. Ian Isherwood. As many of our readers know, November 11, 2018 was the 100th anniversary of the signing of the armistice that ended the Great War hostilities between Germany and the Allies. It is in honor of the anniversary that we selected Isherwood’s book.

KL: I think we should start by noting that each of us took several classes with Dr. Isherwood during our time at Gettysburg and we were familiar with some key ideas from the material before opening the book. Given that, perhaps it would be interesting to start out by talking about some of the major themes we recognized from class as well as those that he expanded upon in the book.

HC: I think the biggest and most familiar message in Remembering the Great War was the notion that there was no one Great War memory coming out of the conflict and, therefore, there can be no universal war book penned by Great War veterans. This idea — the endemic nuance of history — was one that I knew to expect from this read, but was still grateful to see reinforced.

BC: The extension of this idea was one of the most enduring lessons I took away from Dr. Isherwood’s classes: you cannot responsibly construct a single, all-encompassing argument concerning the way the Great War was remembered. Isherwood is nothing if not responsible in Remembering the Great War, and so any one definitive picture of how soldiers remembered their experiences is not to be found in its pages. Instead, Isherwood deconstructs these myriad memories by geography, class, and typology, resulting in a whole host of micro-arguments to reflect the variety of the war’s participants.

KL: It’s certainly a strike against the narrative of universal disillusionment. Drawing on recent historiography that pushes back on the portrayal of the war as a futile slaughter, Isherwood demonstrates how soldiers infused a wide range of meanings into their published writings. Men like Charles Douie, Charles Carrington, and Vivian Gilbert (a personal favorite) each had their own war experiences, and none of them fits comfortably into a field of memory dominated by the writings of “poet-soldiers” Siegfried Sassoon and Erich Maria Remarque.

BC: There is one argument that Isherwood touches on that we had not encountered before in class and which is incredibly important to keep in mind when confronting the memory of the Great War. One of the best parts, for me, of Remembering the Great War is its discussion of memoir publishing as an industry in the decades following the war and the grueling process authors went through to see their writing be published and, ideally, become commercially successful. It’s a fascinating dive into the process by which memory is constructed and preserved, but the amount of capital and connections required to make it through this process means that the vast majority of published Great War writing came from middle- and upper-class men who would almost universally have been officers of some kind. As such, while there may not be any one memory of the Great War, there is little published memory of the British rank and file’s Great War at all.

KL: And not only did the publishing industry draw its manuscripts from certain classes of society, it also shaped the memory of the war in how it framed books for commercial success. The authors were not writing these accounts in a vacuum. Isherwood demonstrates how publishers had to balance the public’s taste for grit and the authors’ search for idealized meaning. Moreover, accounts from different fronts were varied in accordance with the reading public’s expectations: while memoirs of the Western Front often depicted the “battlefield gothic” so familiar to us today, authors writing about operations in the Middle East tended to dramatize what was widely seen as a sideshow, depicting it as a riveting Oriental adventure. Of these, Gilbert’s Romance of the Last Crusade is perhaps the most . . . over the top.

HC: I think what frustrated me while reading this book was that it seems like it doesn’t quite know what it wants to be. It straddles the line between being an annotated reading list for Great War memoirs and being a broader analysis or history of those memoirs. The work comes across more as an intricate quilt of soldier and veteran experiences and stories than a cohesive narrative. I would have loved to have seen more in-depth treatments of the book’s many subtopics, such as the prisoner of war experience, race, class, and gender. It would have been amazing to read the same book re-divided into chapters like “The Citizen Soldier,” “The Poet Officer,” “The Pilot,” “The Medico,” “The Prisoner of War,” etc.

KL: But isn’t that tied back to the deliberate rejection of a single “cohesive” narrative or even narratives? Perhaps when you peel away the mythology of a universal narrative, it’s natural to find the resulting complexity to feel like patchwork. Maybe that’s a question of which the implications could have been discussed further in the book.

HC: Maybe so. Something that stood out for me as quite different from the way Dr. Isherwood tackles this subject in classes is that he seems to dive in with the unspoken assumption that he is preaching to a well-informed choir. He hits the ground running from the first pages, and many of the more carefully-laid foundations of his arguments are laid behind the scenes. Despite never explicitly saying so, the book seems to frame the British Great War experience as the default center of the war’s memory. These things surprised me as a student of Isherwood — this book was so obviously written for his peers in upper academia, and up to this point, virtually all interactions I had had with Dr. Isherwood on the Great War had been student- and public-facing. At the same time, though, the language he uses is very readable; with more thorough introduction of ideas, Remembering the Great War could be quite accessible to a larger audience.

BC: Agreed. I think Isherwood’s analysis can best be appreciated as a nightcap of sorts to one’s study of the conflict. It’s not for the faint of heart or the tenderfoot historian. Armed with full battle kit and the willingness to engage a slippery intellectual enemy, though, Remembering the Great War can lead to an enriching reflection on just how our perception of this seminal conflict has been shaped by the men who fought in it.

Interested in reading the book and contributing to the discussion? You can find out more information about this Book Club pick below: