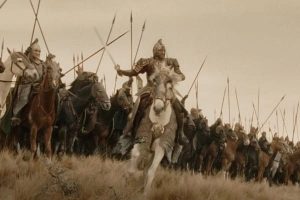 Arise, Riders of Theoden! The Charge of the Rohirrim: The siege of Minas Tirith ends and the Battle of the Pelennor Fields begins with the arrival of Theoden King and the forces of Rohan from the north. A massive cavalry charge cuts deep into the forces of Mordor, relieving the just-breached gate and bringing with it the first rays of dawn to end the Dawnless Day. While Tolkien may have based the culture of Rohan on his beloved Anglo-Saxons (see last year’s post on that very subject), here the Riders of Rohan enter a different era: the High Middle Ages, where cavalry (particularly heavy cavalry) dominated the battlefield. Knights formed the backbone of any medieval European army, and the charge’s role in breaking an enemy in battle would hold central place until well into the modern period (with ever-decreasing effectiveness). Note, though, that a cavalry charge is much more deft a maneuver than simply riding straight at the enemy. A horse, no matter how well trained, will never charge a seemingly-solid object, and so is little use against a packed, disciplined formation of infantry. Instead, charges must either challenge the nerve of infantry, causing them to break formation, or strike the less-organized flanks or rear. Here, Theoden and his riders take the Enemy in the flank and carry all before them in a charge that may just end up being too successful…

The key to Aragorn, Imrahil, and Eomer’s combined victory at Pelennor was the timely arrival of reinforcements on the battlefield. In any type of warfare, reinforcements are crucial. Overcommitting reserves or reinforcements too early can lead an army to overextension and defeat in detail. Historic examples in warfare of this phenomenon abound, but, in particular, the Siege of Vienna in 1683 is a pinnacle example of the way reinforcements are crucial to relieving sieges and determining the final outcomes of battles. In 1683, John III Sobieski, the King of Poland, arrived at the city of Vienna in time to beat back a massive Ottoman army that had come to conquer this Habsburg city. This victory, which was brought about by an alliance between Poland, the Holy Roman Empire, and Austria, curbed Ottoman imperial expansion in the Balkans in the 1600s. In many ways, the Siege of Vienna can even be seen as a historical corollary to the Battle of Pelennor Fields since a mighty, expansionist power (Ottoman Empire/Mordor) was stopped by the combined alliances of smaller kingdoms (Poland, Austria, and the HRE/Fiefdoms, Minas Tirith, and Rohan) all threatened by the hegemon’s expansionism (This does not mean the Ottoman Empire is Mordor. Tolkien never used his work as allegory and finding corollaries is not the same as equating an Early Modern imperial state with the evil quasi-theocratic despotism of Mordor).