I never planned to live in New York City. In fact, I promised myself I never would. Broken promises aside, I’ve been finding my year in the city to be enriching personally and professionally. Beyond the excitement and flair of the cultural scene, New York has a rich historical landscape, one that is visibly present everywhere you look. Barring, perhaps, our nation’s capital, I’m convinced that New York is the only place where I could have moved after Gettysburg that would have matched the level of monumentation found there. The statues here may be spread throughout dozens of small nooks instead of clustered in one major military park, but the history they represent is far deeper than four days in 1863. This week, I thought I’d share some of the neat historical imagery that surrounds me every day. 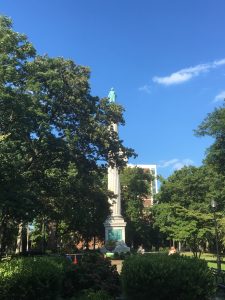 Not far from my apartment in the northwest corner of the Bronx, there’s a park where I enjoy working when the weather is warmer. The park is named for Henry Hudson, the English navigator who first explored this area while searching in vain for the Northwest Passage. Hudson stands atop a column that towers over an open plaza, allowing him to look southwards toward the river and parkway that bear his name. The column’s base is decorated with relief of his encounter with Native Americans—a rather benign image of peaceful trade that belies the dispossession that soon followed. 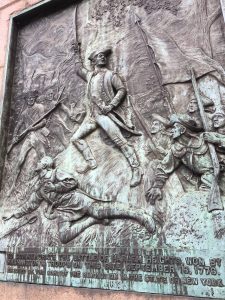 If we take the Henry Hudson Parkway downtown, we’ll come to the intellectual mecca of Morningside Heights. Heading north from the main gate of Columbia University at 116th and Broadway, there’s bronze relief on the corner of a building. Most pedestrians just walk past, but those who look at the image learn they are standing on the ground where the Battle of Harlem Heights took place during the Revolutionary War. Apart from commemorating the battle, the monument serves as a reminder that the seemingly timeless concrete jungle only conquered Morningside Heights in the nineteenth century. True believers in battlefield preservation may be aghast to learn that Barnard College stands atop the site where the fighting was fiercest. Just another reminder that battlefield preservation is a (relatively) modern concept. 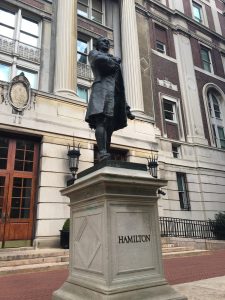 Before going off to war, the ten-dollar Founding Father briefly attended King’s College in 1774—the institution that became Columbia after a short period of crisis during the American Revolution. His statue stands in the southeast quadrant of the Morningside Heights campus. Last semester, I didn’t see much of him because my classes were scattered around the periphery of campus. This spring, however, I have a weekly class in the building that stands behind him: the appropriately named Hamilton Hall that faces out towards John Jay Hall. Nearby, a third Founding Father, Thomas Jefferson, stands in a corresponding place of honor—his presence has proven more controversial in recent years. 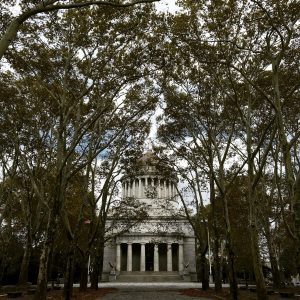 Who’s buried in Grant’s Tomb? That joke used to drive me crazy, but it makes more sense once you’ve seen it. Northwest of campus stands the mausoleum of one of America’s most underrated leaders. The tomb itself is a magnificent tribute to Lincoln’s general, but I was taken by two things when I visited last semester: the surreal bench encircling the tomb and the poor state of repair of the wider park. The visitor center had outgrown its original function and rear of the tomb was blocked off because the stone stairs were crumbling. Fortunately, however, work began last month to restore the park to its proper glory. Just in time for Ron Chernow’s new biography to stoke new public interest in Grant. The Tomb is the largest and most significant of at least four Civil War monuments within two blocks of campus. Across the street, Dan Butterfield stands cast in bronze. As for the others… 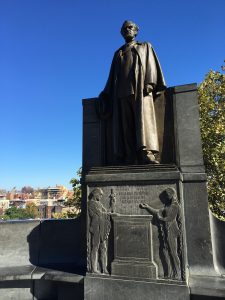 The Civil War monument I visit most often is that of Carl Schurz, German revolutionary and American Civil War general. His impressive figure stands at an overlook above Morningside Park, the steep sliver of greenspace dividing Columbia from Harlem. The elaborate marble and monument lauds his contribution to human rights. Appropriate, I suppose, for being so near to the School of Public Affairs and its hundreds of students studying human rights issues. Misleading, too, as modern conceptions of human weren’t developed until after the monument was erected in the early twentieth century. I haven’t quite figured out the meaning in its original context. Elsewhere in the city, an entire park is dedicated to Schurz’s memory.

I’ve also been told a monument to Franz Sigel can be found in the park along Columbia’s opposite boundary, although that’s a much larger park and I’ve yet to find his statue. What is clear is that these German immigrants left their mark on the city and our country. 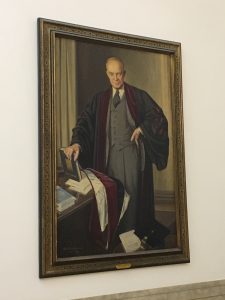 Statues, of course, are not the only way of honoring an individual’s legacy. In the university’s flagship library hangs this portrait of President Dwight D. Eisenhower—president of Columbia, that is. Before serving as POTUS and later a trustee of Gettysburg College, Eisenhower was the successor of Nicholas Murray Butler, a renowned if controversial educator. Eisenhower’s short tenure was also marred by controversy and faculty dissent. His role was very different than he anticipated, and other responsibilities—including NATO and a presidential campaign—kept calling him away from campus. Still, his presidency was an important moment of postwar rebuilding for the university, during which the university launched a number of flagship programs and initiatives. I still think the International Affairs Building should be named after him. The elevators would still run painfully slowly, but at least the building would sound less generic.

There’s plenty more out there, but these are some of the historical icons that I encounter most often during my daily routine. For years, I assumed that the relentless vertical progress of the city would have wiped away memories of the past. Indeed, many people, places, and moments have been forgotten amid the daily bustle and constant expansion. Many more will be, too, as the city continues to reinvent itself for the future. Still, New York City carriers a rich past for those with the interest, time, and patience to seek it out.

Postscript: If you’ve noticed a lack of women on this list, know that I have too. The memorial landscape of Columbia and New York is as much a monument to the patriarchy as it is anything else.

2 replies on “History Abounds in NYC”

Wonderful! I lived in south Brooklyn for 3 months and I am ashamed to say I couldn’t find the time to really get to visit the historical parts of the city. I do highly recommend the Brooklyn Museum by the Grand Army Plaza at the north end of Prospect Park though. (I found it to be much more culturally sensitive than the American Museum of Natural History, actually.)

To my shame, I’ve yet to make it to Brookyn (it’s a bit of a hike from the Bronx) but I definitely have those on my list and look forward to going.