There is a shrouded vale tucked into the mountains north of the Golden Gate Bridge that is one of the more unique National Park experiences I’ve ever experienced. If you’re not traipsing up and down the neighboring hills (as most don’t), the entire experience only takes about an hour, but is well worth it to walk between towering redwoods and explore an environment that feels as if it hasn’t changed for untold eons. It is a must-see destination in the Bay Area, in my opinion, and thus when my parents came to visit this past weekend, it was on our itinerary. As we wandered beneath the lofty canopy and read interpretive signs in hushed voices (the usual mode of communication at Muir Woods by unanimous unspoken agreement), we passed many supplemental signs of laminated paper. This came as no surprise, and in fact I had expected much temporary signage due to COVID-19 precautions and messaging. Some, though, held substantial interpretive messages. And then, on a sign detailing the process of preserving Muir Woods for future generations, I saw the following addition: 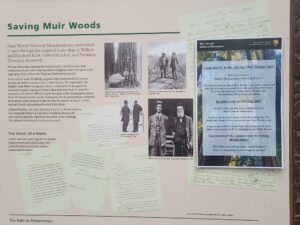 Much has been made in recent years of the re-interpretation of history at our national parks, and much has been made in recent months of the impact of teaching critical race theory in our schools. Here, though, in all its elegant simplicity, was how you introduce the public to the uncomfortable idea of how our society prioritizes and privileges different peoples. On ground historically preserved and managed by indigenous peoples, just north of one of the most diverse cities in the United States, the original narrative of the park’s foundation revolved around three wealthy white men. Drawing on it’s previous (admirably extensive) interpretation of regional indigenous history, this short sign asks simple questions to point out the insufficiency (not, crucially, the accuracy) of that narrative and its exclusion of both non-white and non-male people, all without taking down existing structures.

This is, of course, a bare minimum of effort required to face our difficult shared history, and there are definite differences between a largely innocuous sign at Muir Woods and a monumental commemoration of treasonous white supremacy on an American battlefield. I would hope to see a more permanent sign in the future, maybe even deployed in such a way so that engaging its material is less optional. All that said, it is encouraging to see such interpretive innovation coming in the midst of what has been a trying year for the Park Service (not to mention everyone), and just another reason why Muir Woods is an essential trip if you ever find yourself in the San Francisco Bay Area.