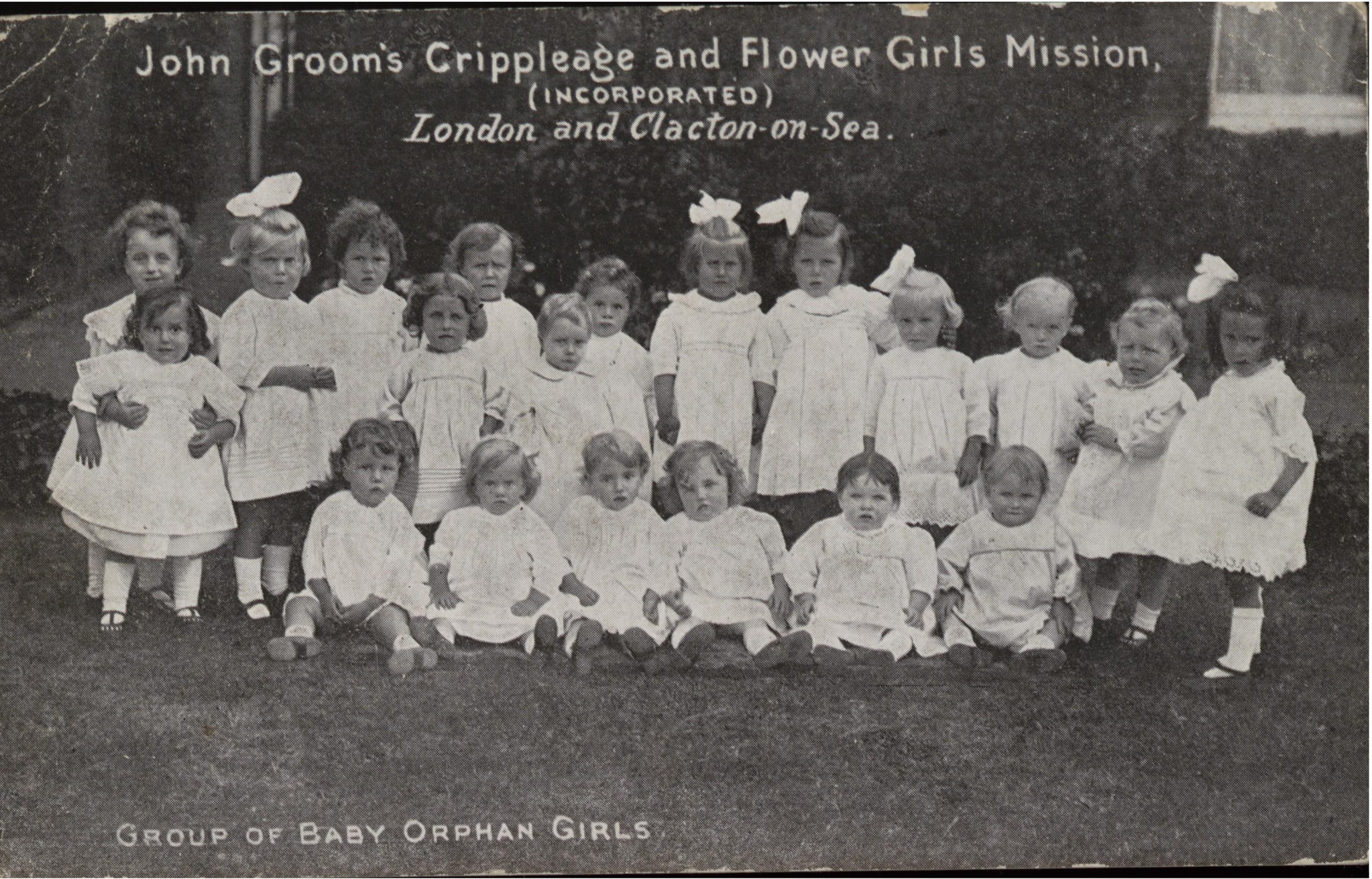 Two years ago, I stumbled across an advertisement while reading Headway, the monthly bulletin of Britain’s League of Nations Union. It was an intentionally striking and provocative image featuring a silhouette of a young woman with the following caption:

This is Helen . . . She paints beautiful flowers. We cannot show her full portrait. For arms she has just two stumps. She has no legs. Yet she does wonderful work.

The advertisement was for John Groom’s Crippleage and Flower Girls’ Mission, an institution established in 1866 by evangelical reformer John Groom to provide food, warmth, and religion to the poor girls who sold flowers in the streets of London. Perhaps it was the spirit of self-help he saw in the flower girls that aroused Groom’s pity and inspired him to expand his mission into a residential workshop where girls with disabilities could be trained to create artificial flowers, seen by contemporaries to represent the cultivation of industry and beauty. For decades, this model sustained the institution and the girls who lived there under severe guardianship.

The First World War changed the face of disability in Britain. As veterans returned from the front with broken bodies and no livelihoods, the British state began to take incremental—and short-lived—steps to support its wounded warriors. John Groom himself passed away in December 1919, leaving his son Alfred to lead an institution serving over 300 young women between the ages of 15 and 18 in two locations in Clerkenwell, London, and Clacton. The Crippleage continued its prewar flower exhibitions, usually at least one major show every year. Describing a 1925 show in Exeter, the Devon and Exeter Daily Gazette hailed a stunning arrangement of

30,000 flowers . . . representative of practically every branch of the English flora, from wild flowers to the most gorgeous specimens of floriculture. All are stemmed and leaved with a precision that is only excellent by Nature herself, while the colouring is harmonious.

These displays allowed patrons to indulge in philanthropy as an aesthetic experience. The presence of a few token girls, however, also underscored the voyeuristic element of the charity in this period. The Exeter exhibition featured four girls demonstrating their work, including “one who is blind and another who is one-armed.” The girls may have seen these events as a special and exciting opportunity to travel and show off their craftwork, but they may also have been conscious of their role as the object of pity and fascination.

Despite the positive reception to its exhibitions, the Crippleage was vulnerable to the winds of change. In particular, its dependence on patrons proved a drawback when the Great Depression struck. In May 1932, the Crippleage moved its London mission from Clerkenwell, in the heart of the city, to the suburb of Edgeware as a cost-cutting measure. A flower exhibition the following year was the last to make headlines, removing a crucial component of the Crippleage’s publicity at a critical transition period.

For the first time, the institution began a sustained advertising campaign in national newspapers around 1936. Although the medium had changed, the values that the institution sought to convey had not. The text and tone continued to reflect a nostalgia for nineteenth-century philanthropic values like paternalism and industriousness, as well as a focus on the innocence and vulnerability of the girls.

At the end of the Second World War, the coming of the Welfare State fundamentally changed the charitable landscape. Not for the first time, the Crippleage felt the ground shifting beneath its feet. Around the same time, the Crippleage revisited the language it used to publicize its work. Back in 1942, the institution had dropped “Flower Girls’ Mission” from its name, perhaps in search of a clearer and more concise identity. By the end of the decade, new rhetoric was being applied even to the women’s physical conditions. Although “disabled” had not yet completely replaced “crippled,” its appearance marked the beginning of a turning point in ableist discourse that would culminate in the institution changing its name in 1969 to John Groom’s Association for the Disabled.

The organization continues today under the name Livability. Along with its name, the charity’s mission has changed considerably. Instead of warehousing people with disabilities, Livability now “connects people with their communities” and works to “tackle social isolation and the barriers that can cause this in the lives of disabled and vulnerable people.”

The longevity of John Groom’s legacy offers insight into the changing approach to serving people with disabilities. In its early years, the institution’s ostensibly progressive mission reinforced an exclusionary understanding of disability through its work and in the way its publicity campaigns contributed to public discourse about disabilities. In leveraging pity for ‘deserving’ and industrious girls with disabilities, the Crippleage reinforced nineteenth century ideas that the value of life came from productivity. The Crippleage in its original form did allow its young women to make claims for social belonging, but it was a marginal belonging based on their marginal labor. Still, despite its conservative approach during the Interwar period, the institution did innovate in ways that allowed it to survive the Great Depression, the Second World War, and the advent of the Welfare State, unlike a number of its peer institutions.