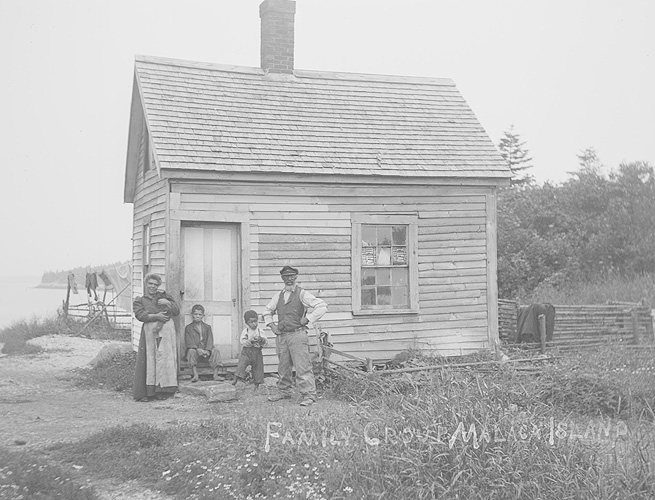 Some of my earliest memories are of the sea breaking on the rocky cliffs of Small Point, Maine. Every summer, usually in August before the start of school, my parents would drive us up I-95 through Connecticut, Massachusetts, and Vermont, stopping only for lunch in one of a handful of locations on the way to Bath, and then out on the point past Phippsburg. The most anticipated part of the whole trip was of course  the drive up the long dirt road to the Small Point Club house which sat on a bluff overlooking a roughly three mile long beach complete with a tidal river and white cliffs off in the distance. Sometimes with my family’s Westy, and sometimes with my little brother, I’d go running up and down the beach, passing the wrecked, weather-worn ribbing of a hundred-year-old fishing ship that had been abandoned after a storm in the late 1890s or climbing into the caves in the cliffs close to the main house. It was a place where my benign imagination could run wild. I imagined seeing mermaids on the rocky islands offshore or looking for hidden pirate treasure in the Cave of Wonders. Despite growing up visiting this place, it was only in recent years that I started to become interested in the local history and folklore of the Phippsburg community and the islands just offshore.

In a quick internet search a few years ago, I discovered an article about an exhibit on Malaga Island that had opened at the Maine State Museum. Malaga was a 42-acre island just offshore of Phippsburg where over one hundred years a population of around forty “white, black, and mixed-race” people who were living relatively secluded were ordered by the state to evacuate with their homes. Around the turn of the twentieth century, the state of Maine informed these people that their homes would be burned, and approximately one fifth of the population was forcibly removed and incarcerated in the Maine School for the Feebleminded in New Gloucester. As if to erase the landscape of their existence, officials dug up seventeen bodies buried on the island and re-interred them on the School grounds. One couple managed to escape with their children on a house boat, only for the mother and children to die from malnutrition while the husband went to search for help on shore. Many of those who were imprisoned at the mental institution lived out the rest of their lives there. After the event, the people of Phippsburg and the surrounding area did not want to talk about this shocking example of scapegoating in their recent history. As the article states, many of the descendants of Malaga chose to stay quiet, hoping not to unwittingly associate themselves with the “feebleminded,” “black,” or “mixed blood” people who had lived there. Malaga became taboo. This was a narrative of displacement all too familiar to students of American and global colonial histories. These foreign savages were misusing the lands they occupied, or were living in subhuman conditions, and what was best for them was removal, and institutionalization.

After a little extra research into the story behind Governor Plaisted’s decision to evict the Malaga Islanders, I came across an article by Holman Day in the September issue of Harper’s Monthly Magazine, 1909. It begins rather ominously: “Of old, muskets drove the Abenakis off the coast of Maine. Today, money is driving away another race;” Not dissimilar to stories of forced eviction we hear about today. What struck me most was the attention the author paid to the supposed delusions of the “Queer folks.” One Uncle Ossian, at close to eighty, lived on the island his whole life and (according to the author) would not trade it for a yacht, for fear that he would abandon Captain Kidd’s treasure buried just out of reach. I remember looking for treasure myself as a child, but with age I felt it was socially unacceptable to continue the quest. The implication for Uncle Ossian is therefore obvious: the people who live on these islands are prone to childish delusions “for solitariness and sea breed strange thoughts.” Elsewhere the author discusses the actions taken by sociologists to encourage education on the island, including the building of a school house and the installation of a missionary teacher for the young islanders. He describes the impressions Maine sociologists and other such paternalistic mainlanders had of the “Malagaits,” who were a people “singularly susceptible to religious influence,” and that “with the exception that their ideas of the social code are primitive, they are blameless as far as their relations with the world go…” The resounding message is one historians of colonization will recognize clearly: The island is inhabited by noble savages who, in order not to attract the attention of prying tourists from our civilization, have retreated into their savagery.

In the words of Alison Wylie exploring this same phenomenon in the context of indigenous histories, “the theses of extinction, abandonment, and assimilation become self-fulfilling colonial ambitions.” If these peoples were so harmless, what changed? Why not leave them to the rocky crags of these coastal islands? The answer lies in where they were sent. The island had made Malagaits’ imaginations run too wild, their behavior at mainland church services was too “primitive,” and to academic and government observers, their humanity seemed to leach into the salty seas surrounding them. While I was aware of the history of racial anthropology and the eugenics movement in early twentieth-century academia, I was not aware of the shocking history so near my boyhood haunts. Near the site of my own memories of swashbuckling pirate make-believe, another set of memories were buried. These were the hidden away scars of collective shame, another effort at historical erasure.