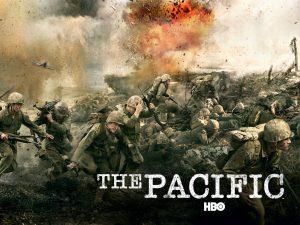 I realize that I am long overdue on this one. I’ve always meant to get around to watching HBO’s follow-up to their acclaimed miniseries Band of Brothers, but The Pacific inexplicably kept slipping down further on my watch list. Finally, this past winter, my brother sent me his DVDs of the series, and I no longer had any excuse to wait. As a huge fan of Band of Brothers (despite some of its odd interpretive choices), I was eager to dive into a similar telling of a different theater of the Second World War. As Heather and I made it through the miniseries’ ten episodes, however, I found myself both satisfied and left wanting.

The Pacific is a gorgeous show, on par with the level of production value and visual experience we may have come to take for granted in this golden age of television (of which HBO has played no small part in bringing about). We both found it difficult to put it on in the background while accomplishing other tasks like we do with so many other shows; every five minutes, the vividly-realized drama would pull us back in and demand our undivided attention. Although some episodes were noticeably slower than others (the 1st Marines’ stint in Australia after Guadalcanal comes to mind), as a whole the series certainly delivered in terms of entertainment.

In terms of history, however, The Pacific felt a little…choppy. It’s predecessor confined itself to the history of a single company of men in the European theater of war and focused on telling their story first and foremost. The fact that Easy Company’s service nicely mirrored the history of the American war in Europe is likely why they were originally chosen by Stephen Ambrose for the book on which Band of Brothers was based. The Pacific, however, attempts to tell the intimate personal stories of just three men, Eugene Sledge, John Basilone, and Robert Leckie, while situating their experience within the framework of the entire war in the Pacific (or at the very least, show you the progress of the war up to the point of that particularly episode). The show succeeds at the former while largely failing at the latter, falling far short of living up to the lofty aspirations of its title. Even the end of the war in the Pacific is delivered through hearsay, as Marines on Okinawa hear of the dropping of the atomic bomb and the fact that hostilities have ceased.

Indeed, The Pacific’s exclusive focus on these three men can even at times seem highly repetitive. While admirably showing the rotation of veteran and green Marine units throughout the island hopping campaign, the result seems at times to just be the same story over and over again, as Marines experience the horrors of the war, grow disillusioned and desensitized, but ultimately retain their humanity and return to society. This last is perhaps one of the more gratifying aspects of The Pacific; unlike Band of Brothers, which relegated its veterans’ return to civilian life to a narrated slideshow, this miniseries devotes an entire episode to Leckie and Sledges’ attempts to re-acclimate to their old lives, to varying degrees of success.

Ultimately, I would still recommend The Pacific to anyone interested in the Second World War or military history more generally. If you come prepared with enough knowledge to place each episode in its wider context, all the better, but even the uninitiated audience will likely enjoy its captivating and human story.