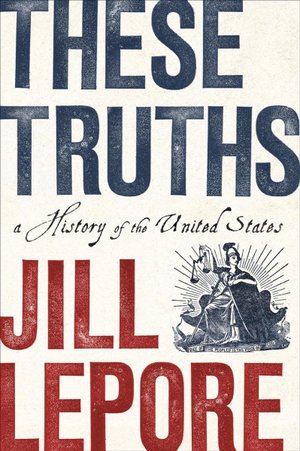 Lepore, Jill. These Truths: A History of the United States. Audiobook. Recorded Books, 2018.

I must confess that I did not actually “read” These Truths, or at least not in the conventional sense. Instead, I opted to listen to the audiobook version, read by the distinguished Jill Lepore herself. And so it was that I “read” These Truths in segments over the past few months on long car trips across the Midwest and up to British Columbia and doing mindless data entry for work. By months, I mean months. This book is long—nearly 1,000 pages of text (or 29 hours of listening)—and therefore quite an investment timewise. I had hoped to get a comprehensive yet digestible look at the history of the United States. I was not disappointed.

If you’re looking for a strictly political history of the United States, complete with timelines and a list of every president, These Truths is not your books; you’re looking for your 10th grade history textbook. Rather, These Truths tells the history of the U.S. through the ideas and concepts that have shaped the nation throughout its history, from the meaning and importance of citizenship to the meaning and importance of truth itself. Most presidents and other prominent historical figures receive only a single passing remark if anything at all.

Occasionally, this style can leave the reader a bit confused without a more tangible political timeline and narrative to follow. But after all, timelines and narratives are almost invariably the inventions of a retrospective historian rather than the creed of the contemporaneous and so Lepore should be applauded for effectively detaching her thorough examination of U.S. history from the usually problematic manner in which it is taught in grade schools across the nation and subsequently understood by the general public. While having a firm grasp on historical events and figures might help a reader who is desperately trying to fit Lepore’s narrative within the confines of their primary and secondary school-rooted understanding of American history, this background knowledge is not necessary to understanding the main points and messages Lepore delivers.

Lepore spends a lot of time discussing the “Founding Fathers” and their (many) ideas for the nation during its earliest years. Many of the themes that ran through their debates before and during the early Republic become motifs for later years as these ideas, so Lepore’s detailed and nuanced grounding of this period is crucial. However, Lepore’s main takeaway from this central period in her book and the nation itself is the degree to which the Founders disagreed rather than their consensus, which Lepore contends time and again is a modern myth. In fact, she throws into question the very makeup of the traditional pantheon of Founding Fathers, weaving a narrative that traces the roots of the arguments made in Philadelphia in 1776 and 1787 to earlier thought pioneers. Lepore’s Founding Fathers are often just the latest mouthpieces and modifiers of centuries-old ideas, which are of course more important to Lepore’s version of history than the quibblers and squabblers themselves, who did not even see themselves as the final word or arbiters of their borrowed ideas.

There are no heroes or villains in Lepore’s United States. Each character, big or small and known or unknown, in her story is represented as their whole selves. Andrew Jackson is a trailblazer of more direct democracy as well as a slaveholder and genocidal leader; Mary Lease is a pioneering woman political activist and labor organizer as well as an avowed white supremacist and imperialist; Woodrow Wilson is a progressive reformer and liberal institutionalist as well as a devoted segregationist and monocrat. No one is vilified, no one is deified. Lepore writes history, not hagiography.

These Truths traces the long origins of many debates that still roil American dinner tables today, from gun rights to voting rights, secularism to the press, healthcare to environmentalism. In each case, the biggest takeaway is often just how long these important issues have shaped popular political discourse across the country. When Americans debate today and go to the polls later this year, they’ll be deciding on policy issues that have often been framed as (exciting/terrifying) new ideas. In fact, from single payer healthcare to wealth taxes, Lepore shows that there are few new ideas under the sun or in the American political landscape. This may leave Lepore open to accusations of presentism in her historical analysis, but I think this would be unfair. Lepore is of course writing history without completely checking her modern assumptions and perspectives at the door. We all do. But Lepore is not using the present to inform the past but rather explicitly using the past to inform the present. Lepore’s usable past is crucial to understanding how the modern political landscape has become so seemingly hopeless and destructive, which leads us to Lepore’s epilogue.

Lepore ends her epic work with a striking parable. Throughout These Truths, Lepore uses Platonic imagery referring to the United States as the “ship of state,” which often finds itself dangerously adrift during particularly turbulent times in its history. In her epilogue, Lepore speaks of the present day. In one final use of the nautical parable, the ship of state is careening out of control in yet another tempest. The conservatives have seized control of the helm but are destroying the masts and sails, caring little if the ship ultimately wrecks on a rocky shoals. The liberals are below decks, equal parts cowering and bickering. I’ll leave it for the reader to decide whether this is an apt characterization of the United States toward the end of the 21st century’s second decade, but I will say that Lepore makes a fairly compelling case in the preceding final chapters.