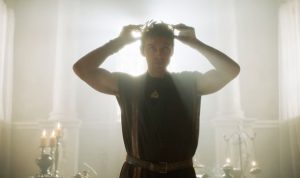 About a year ago, Francis and I watched the second season of Netflx’s ancient historical docudrama, Roman Empire (reviewed here on Concerning History). On the whole, we were disappointed. Production value was low, and its narrative of Julius Caesar’s rise to power was both sensationalized and oddly understated. Still, I’m never one to forego anything set in the ancient world; I get so little of it these days, and beggars can’t be choosers. In my previous review, I even expressed some hope; I didn’t mind the show’s many flaws if, as I hoped might be the case, it could serve as a platform for telling the stories of lesser known figures from Roman imperial politics. When I saw that Roman Empire’s third season was upon us, then, I dutifully powered up the computer and settled in to watch.

As soon as I saw the subtitle of this third season, however, I knew I was in for disappointment. “The Mad Emperor” could only refer to one of two Roman emperors (especially as the first season, Reign of Blood, had already covered Commodus). As I thought, this season was to portray the reign of Caligula, third emperor of Rome and great-grandson of Augustus (the other option being the fifth emperor, Nero). Fate settled upon me like a shroud; my dreams for a Netflix series telling the stories of Septimius Severus, Diocletian, even Constantine or Justinian, were dashed. Of course this was yet another show trying to capitalize on the well-known, salacious bits of Roman history that have been tread a dozen times over.

Roman Empire’s telling of the story of Caligula is perfectly competent, for what it’s worth. More a tale of madness and intrigue, The Mad Emperor avoids laughably-small scale engagements or inaccurate depictions of Roman warfare. The show goes to admirable lengths to contextualize the young emperor, detailing his upraising at the hands of his father Germanicus in the camps of his legions, his cutthroat apprenticeship under his great-uncle Tiberius, and the challenges facing the Roman state upon his succession. The show may even be said to be sympathetic towards Caligula; rather than some moral failing, his eventual mental break is portrayed as a side effect of an acute fever. I prefer Cambridge Classicist Mary Beard’s take, that Caligula was not mad and was just relentlessly antagonizing the Senate and rejecting its traditional expectations of him, but brain fever works too. Even the planned invasion of Britain is given more appropriate attention than just “He declared war on Neptune and told his soldiers to gather seashells. Insane!”

In the end, Roman Empire: The Mad Emperor is perfectly average. Devoid of the objectionable decisions of prior seasons, it nevertheless holds nothing particularly noteworthy. Most of my feelings about the show admittedly stem from my own unfulfilled expectations, so if you’re also a devotee of the ancient world, I encourage you to give it your own try. Knowing Netflix’s penchant for cancelling shows after their third season, the future may very well be bleak for Roman Empire. If it does end up getting the axe, I don’t think I’ll end up shedding any tears, but if it limps along, you can be assured I’ll be back again, same time next year, hoping beyond hope yet again.

They clearly put more effort into this. Though over this season and the last one I’ve grown very tired of Mike Duncan’s ambiguity and Barry Strauss’ arm-chair psychology. All the other historians do a wonderful job of explaining why ancient Rome is such an interesting topic; specificity goes a long long way with history documentaries. I agree with you that Septimius Severus and other lesser known figures deserve more attention, I’m reading Gibbon’s magnus opus and it’s hard to believe Hollywood never bothered to tap into so many extraordinary stories. All we get from antiquity is 300 and Gladiator. Even HBO’s Rome is somewhat questionable; the incest thing between Octavian and Octavia was just totally needless and not historical (unlike Caligula’s). Comments:
A) Was it ever proven that Tiberius killed Germanicus? Lots of convenient deaths, like Augustus’ grandsons, but still. It’s asserted as factual in the documentary. All I’ve read as far as primary sources is Suetonius, and he spits out all the rumors but stops himself from outright accusing Tiberius.
B) Soundtrack is just awful, 2010s ought to go down as a seriously awesome decade for good soundtracks, but this ain’t one of ’em. Chernobyl comes to mind. Trent Reznor’s Vietnam work…
C) Praetorian Guard wearing black leather? Officers without helmets?!
D) Barry Strauss supposes that Villa Jovis being named after Jupiter means that Tiberius thought he was comparing himself to Jupiter. This is History Channel levels of cringe.
E) “This is a son of Germanicus” says some soldier, “Is that true?” asks Tiberius who asked him there in the first place; bad writing.
F) Amanda, the journalist: Caligula was “very savvy”, okay but why are you in this documentary? Starting to get the sense that these History Channel-style documentaries just don’t work. Netflix copying this style is disappointing. They’d have made more profits and gotten better reviews if they had just taken a couple of weeks to read primary sources, but no.
This episode, the first episode, is definitely emulating GOT, the HBO series. Just lots of gratuitous sex and fixation on power in a really abstract sense. More honest than what you might get out of say, the Robe (1953), but still very shallow in it’s own way.
G) There’s a comment about how the sexual morays of Imperial Rome are more liberal than our own, which, given contraceptives, is simply not true. Capri was the exception, not the rule. The Lex Julia for example, was something hard to imagine today. Albeit, the Netherlands implemented something similar not too long ago.
H) Architectural depiction of Villa Jovis was underwhelming, so much art to gleam from. Oh well.

2nd episode:
Naked assertion that Caligula killed Tiberius. In that case it’s fair game to state Jeffrey Epstein was killed too? I, Claudius did a much better job of depicting the intrigue of the imperial family; someone just happens to eat the wrong kind of food, people die off-screen, etc. No subtlety here.
A) Awfully small Senate house, only 20 Senators present, not enough for a quorum. Budget is no excuse, Rome had hundreds of Senators and the actual senate house wasn’t even that big.
B) I don’t recall Claudius having the task of finding Caligula’s sisters. Were they even lost?
C) Journalist says “you can’t kill a member of the Imperial family, according to ancient Roman law” BALONEY. There is no such law. There was the Twelve Tables of Rome which were memorized and there was precedent, in a legal sense; that’s it. Amazing what people will say simply because they think you’re ignorant.

3rd episode
A) What was really speculation is asserted as fact; Netflix writers got way too excited to promote incest. Honestly just weird how HBO and even in Gladiator this comes up in a way that’s not even really historical at all. I, Claudius handled it better, maybe Caligula messed around with Drusilla when they were younger, that’s about as far as Suetonius takes it, and Suetonius was sometimes no better than some gossip rag. Sean Bean is narrating this like it actually happened for sure.
B) Not even the slightest attempt to make Claudius seem stupid. I wonder if they even knew about his reputation.
C) Funniest and most entertaining thing Caligula did was make senators jog beside him while he was in a chariot for miles and miles. Would have been great to see, but no. Writers just wanted to lean into the incest part, have the actor yell once or twice, a few action scenes (one of them is clearly just copying the beginning scene of Commodus in Gladiator). And they used some recycled footage from the first season whenever gladiator games are mentioned by historians. Production value is ridiculously low, Suetonius description of Caligula was only 20 or 30 pages and had ample amounts of scenes, actions, dialogue that they could have used.
D) He doesn’t even come off as particularly crazy. Suetonius talks about Caligula dreaming about talking to the ocean, or whispering in the ear of a statue of Jupiter; instead just jolting music and a purple filter for the lens.
4th episoide:
E) Late republican helmets? Dirty scutums on march?!
F) No loyal Germanic Praetorians trying to fight off the rest? It’s an important element until the last days of the empire.
G) Where is the reluctant Claudius hiding in the Imperial palace?
This isn’t a budget problem, this is a “make money, be lazy, don’t care about what you’re doing” problem. History Channel has had the same problem; it’s minimal effort.