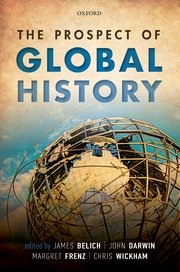 The Prospect of Global History is different than any book I have reviewed thus far. Part manifesto and part proposition, its chapters do not generally seek to argue any particular thesis but rather to elaborate on the analytical framework of the subdiscipline and, through seven case studies, illuminate how that framework can be fruitfully applied across topics and eras.

While at Oxford I had the great pleasure of studying under two of the volume’s editors, John Darwin and James Belich, the latter of whom was my supervisor. The introductory material was thus very familiar to me personally, though I believe I can be objective enough to praise its lucid explanation of the fundamentals of global historical methodology. Global history is accordingly shown to be more than simply a responsible search for context or an evolution of world history courses. Global history seeks to transcend the parochial confines of its constituent elements, analyzing networks, globalization, and the diffusion of all manner of goods, technologies, ideas, and peoples. Just as it is recognized that globalization must be viewed as a process rather than a result, the editors also make clear that global history must not always operate on the planetary level, but is equally valid at the sub-global and semi-global tier as well. Two vital tools for the discipline, the application and formulation of sociological and economic theories, are further discussed in the first two chapters, though the more casual reader should beware a tangled thicket of jargon.

The meat of The Prospect of Global History arrives with the remaining seven chapters. As mentioned above, you won’t find many arguments, groundbreaking or otherwise, in these case studies. Instead, more questions than answers are found in the proceeding efforts to demonstrate how global history can expose the respective topics to a deeper and more interconnected understanding. What results can almost be seen as a series of thought experiments. What can the pre-modern trade in incense reflect about modes of the circulation of goods? Can there really be a global ‘Middle Ages’? How did the Black Death launch Europe’s expansion? Can a global focus fix deficiencies in the historiography of the Qing Dynasty? How does studying Islam as a world system or the global preoccupation with constitution-writing reveal and enrich multiple networks? Should America be considered a formal empire little different from its European counterparts? All these provide ample material for reflection, and may well see further discussion on this very blog.

As with so many collections, The Prospect of Global History’s subject matter is unfortunately limited to its contributors’ specialties or particular interests. As such, some holes do exist in its exploration. Political, economic, and structural history is well represented; so too is the study of ideas, technology, and the myriad facets of globalization and divergence. Lacking, however, is any mention of gender or concrete cultural analysis, though the latter is repeatedly mentioned as an implication without any other elaboration. Spatially, sub-Saharan Africa, South America, and Oceania are underserved, though it is admittedly difficult to adequately cover every region of the world in a case study format.

Despite these regrettable oversights, The Prospect of Global History remains an intriguing and revealing read. I would highly recommend it to any looking to expand their framework for understanding history outside the bounds of specific regions or eras. At its heart, The Prospect of Global History’s manifesto is one that has reverberated with me since before my time at Oxford: all of history’s myriad details are connected, and global history is at its best, indeed at its most necessary, when it demonstrates that the interconnections that tie those details together are greater than the sum of their parts.

2 replies on “Greater than Its Parts: The Prospect of Global History”

Hmm… the idea of global gender/cultural history intrigue me. Any leads? Diffusion and shifts in cultural mores obviously transcend borders but I imagine it is more difficult to document globally than political history and the like. That said, I imagine the payoffs are tremendous.

You’re absolutely right, Kevin. For gender and cultural analysis, pre-modern global history usually takes the form of microhistory which is then tied into larger global patterns. How did the availability of Chinese silk change conspicuous consumption and gender expression in Rome, and how did it’s later scarcity do the same? Or, conversely, how does the spread of Islam throughout southeast Asia illumine pre-European trade routes? Questions like these tend to be the most fruitful before the modern era and the beginnings of the (for now) final phases of true globalization, where it then becomes possible to really study the global diffusion and networks of such concepts.