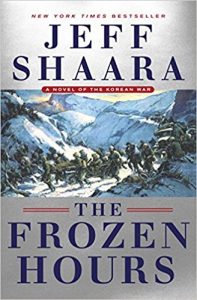 The Shaara name should be familiar to any concerned with American military history. Michael Shaara’s The Killer Angels and its onscreen adaptation, Gettysburg, have had a great impact both on the public memory of the Battle of Gettysburg and the interest of legions of budding historians of all ages in the American Civil War more generally. The strength of Shaara’s prose lay in his ability to tell history as a personal story through the viewpoints of the players involved, and his son Jeff has made a career applying this same style to a number of the United States’s wars. Indeed, my own fascination with more modern history came as a result of reading not The Killer Angels but The Glorious Cause, Jeff’s novel on the Revolutionary War. His most recent work covers events during the Korean War, focusing on the plight of the 7th Marine Division around the Chosin Reservoir in 1950.

‘Frozen Chosin’ may not be quite as forgotten as Shaara indicates in his initial framework, but the details of this horrific battle are certainly not common knowledge. Having thrown back the initial North Korean invasion of South Korea, United Nations forces advanced nearly to the Yalu river, North Korea’s northern border with China, when they were struck by an overwhelming assault launched by the Chinese army. Unwisely ordered to spread out its line of march in an effort to speed the end of the war, the 7th Marine Division under General Oliver P. Smith found itself surrounded by Chinese forces they had been assured did not exist. Divided into five isolated pockets of resistance, Smith’s Marines would fight to survive, regroup, and withdraw all while suffering temperatures of thirty below zero. Shaara is admirably careful in contextualizing his retelling of these events, making clear that the story he has chosen to tell is just one of many. That telling is one that has markedly evolved since his first efforts at writing. With his foray into the Second World War (The Rising Tide, The Steel Wave, No Less than Victory, and The Final Storm), Shaara began to experiment with a more ‘common soldier’ approach than his previously more traditional generals-and-presidents novels. Though successful for that series, his next, this time on the western theater of the American Civil War, seemed to sacrifice much of its historical framework in favor of simply telling a personal story. With The Frozen Hours Shaara seems to have once again found his balance, alternating between three viewpoints to better relate his story of events. Wider context is told through General Smith before Marine Private Pete Riley gives a sense of the campaign on the ground, while Chinese General Song Shilun provides a perspective to explain Chinese movements and balance the narrative.

It is precisely this latter perspective that gives rise to the most pressing weakness of Shaara’s work. Shaara is first and foremost concerned with American history and characters, and his portrayal of Song Shilun lacks any sense of individual personality. His chapters, what few there are, read like a stodgy Communist general of Cold War propaganda, preoccupied with spreading the Revolution while admonishing his subordinates to ignore their units’ casualty numbers in pursuit of victory. This stereotype is made all the more distressing by the absence of any Chinese sources, primary or secondary, in Shaara’s (admittedly partial) list of sources. Chinese material more generally is also written with little cultural respect. The decades-outdated system of transliteration is used for Chinese names (thus Song Shilun and Mao Zedong are rendered Son Shi-Lun and Mao Tse-Dung), and Beijing is referred to throughout the text as ‘Peking’, the old Western corruption of its name. The use of these terms and spelling may be excusable when considering what US Marines during the 1950s would have been familiar with, yet this is not how they are employed. ‘Peking’ in particular is used almost exclusively in Song’s chapters, even in dialogue that is theoretically supposed to be conducted in Mandarin, translated into English for the convenience of Shaara’s modern audience.

Shaara’s fiction is meant first and foremost to tell stories of American military history for American audiences, and at this he is certainly skilled. Giving a personal face to such events, transforming them into narratives more engaging than those found in textbooks, is Shaara’s great strength. He is not a trained historian, however, nor is he necessarily careful to be aware of his sources’ or his own biases. That being said, even those wary of such historical errors may find The Frozen Hours an engaging introduction and springboard for further study, as long as one takes care to hold the fiction at arm’s length.