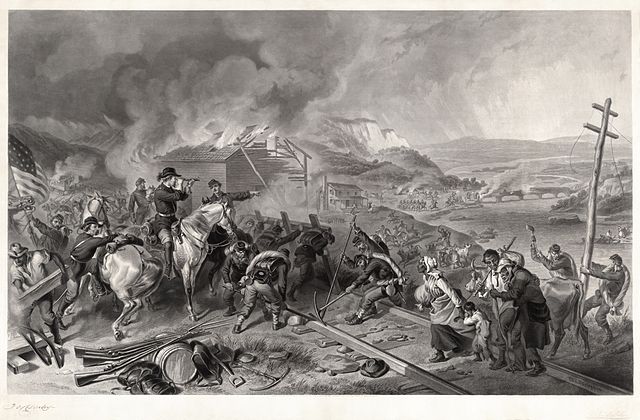 As I was reading Alexander Watson’s Ring of Steel for an upcoming Concerning History Book Club post, I was struck by how easily perspective can be lost when dealing with subjects that we find morally unacceptable.

Ring of Steel offers a different portrait of the war than most English-language accounts. Early on, Watson argues that key parts of German mobilization came from the people’s own perception of encirclement and the perfidious behavior of Britain. In particular, the effects of the blockade—illegal even then under international law—galvanized the spirit of the German people.

That’s not to say that the German Army did not play its own unique role in escalating the violence of the First World War, as Isabel Hull and Alan Kramer have argued. Still, it got me thinking about when and where historians are willing to weigh the ends versus the means.

Back in my Civil War days, I recall Sherman’s March to the Sea was justified by some colleagues to the point of being a punchline. The British Blockade or the Atomic Bomb are sometimes written off as wartime necessities—unfortunate or unnecessary ones, granted, but still justified as playing a role in bringing their respective wars to an end. That’s not usually the same when it comes to the German invasion of Belgium (it doesn’t help that the invasion was not as quick or successful as German High Command had hoped).

Obviously, historians are not uniquely implicated in judging the past. We do, however, have greater responsibility in how we approach it. As much progress as academic historians have made in breaking away from echoing nationalist narratives, they still aren’t objective truth-tellers. And that worries me when it comes to the role they play in accounting for the unaccountable.

It’s a trope—and often a wrong one—to say that the perspective of a defeated belligerent is ignored by historians. Still, I wonder how much our own understanding of who (America) or what (democracy) should triumph allows us to justify or skirt around uncomfortable truths.

To some extent, refusing to deal with these questions of right and wrong would make history sterile. A matter-of-fact treatment of the Holocaust, written any suggestion of a moral position on the subject, might signal to readers a disturbing lack of empathy towards one of the seminal crimes of history.

Of course historians have a role in contextualizing the past. It has to be appropriate for a historian of the Civil War to explain a morally questionable decision in the context of its times, like how D. H. Dilbeck deals with hard war as an acceptable policy for the Union in An Uncivil War. But how far should this responsibility extend, and how do we ensure that we are honest brokers?

I’m uncomfortable with historians acting as ethicists, just as I am uncomfortable with ethicists acting as historians. Despite these concerns, though, I’m not sure how you get around this issue except through constant self-reflection and historical empathy. Perhaps a history graduate education should include ethics as part of methods courses. Or am I making a mountain out of a molehill?