Another academic year come and gone. Over the last nine months, I found myself challenged in ways I had never been before. A crushing workload converged with a sense of displacement, loneliness, and uncertainty as I worked towards my Master’s degree in European history at Columbia University. But you don’t grow by going through the motions of what you already know, and my time at Columbia did teach me to think and work harder than ever. All that’s left for me now is to transform hundreds of documents from nine archives into a coherent thesis paper, which, compared to writing a dissertation, should not be terribly difficult. 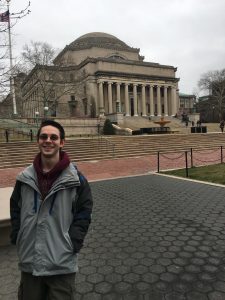 This is the first of a series of posts in which I plan to reflect on what I took away from my year at Columbia. The series will be part introspection and part meditation on the grad school experience. It will perhaps be a slight deviation from our usual content, but one I hope will be useful for me and of interest to readers who may be preparing for grad school now or who are reminded of their own time in the trenches.

First, some background on the course of my year: I went to Columbia with the hope of either getting grad school into my system or getting it out. For most of the year, I wrestled with whether I was capable of pursuing a PhD given the caliber of the students around me. The funny thing is that you can’t always tell in the moment whether you’re experiencing imposter syndrome or have actually reached the limit of your abilities and are struggling to stay afloat. And so, despite positive feedback from my professors, I remained anxious about the future.

It was only after spring break, on an archival trip to Europe (made possible by the generous support of Columbia’s European Institute), that I realized I had been asking the wrong question all along. I had been preoccupied with whether I could earn a PhD, when I should have been asking whether I wanted to.

From there, the evidence stacked up fairly decisively. I couldn’t decide on what field I wanted to study, let alone a dissertation topic. I love both reading and writing, but doing them non-stop made it hard to focus and left me with too much time to get in my own head. The work of a scholar is solitary; though I’m an introvert by nature, I’m energized by the sense of purpose that comes through collaboration, leadership, and mentorship. And I wasn’t thrilled by the job prospects waiting at the other end of the degree, either.

I’m not foreclosing the possibility of ever going back. While it may be wiser to do so and save myself anguish later, that requires far more decisiveness than I can muster. I still have the utmost respect for people with the focus and determination necessary to earn a PhD and a part of me wishes I could be among them. Right now, though, I’ll settle for admitting that the past year did not convince me that it’s a path I feel compelled to follow.

Would I do the last year over again? I don’t think so. I was on the fence about going at all, and I’m still unsure how my new degree will advance my professional ambitions. Then again, if you had asked whether I was looking forward to my final three years at Gettysburg at the end of my second semester, I would have said no.

That said, I don’t regret going either, and I certainly wouldn’t write the past year off as a loss. Calling it “a year of personal growth” sounds either corny or euphemistic, but I think it’s an honest way to describe my time at Columbia. I now find myself asking better questions when I read academic books or think about various ideas. I developed good relationships with supportive faculty and even made a friend or two. I heard lectures from first-class scholars and world leaders, read books that changed how I viewed the world, and encountered the strengths and weaknesses of one of America’s elite universities. Perhaps most importantly, I learned to adapt to life in New York City—and, as they say, if you can make it there, you can make it anywhere.

I’m thankful for the privilege to have spent a year of my life at Columbia. I’m thankful to the people who were helpful to me as I settled in, and to those strangers who were patient and forgiving as this temporary transplant from semi-rural Pennsylvania found his city legs. I’m thankful to old friends for ensuring I never felt totally cut loose from the moorings of my past. Above all, however, I will always be grateful for every act of kindness, large and small, from my professors and colleagues. They allowed me to move past the disappointments and frustrations of the past year to make the most of my brief time at Columbia. And to anyone reading this, I thank you as well for your interest in my journey.

One reply on “Concerning Grad School: A Year in Review”

I’m so glad you were able to arrive at a decision that made you happy. I had a college friend in the sciences that came to a similar conclusion you did; he realized he was only interested in pursuing a doctorate because that was what everyone expected of him, not because he wanted one. As someone who works in the upper levels of academia I am greatly concerned with what I see as “inflation” of the value of a college degree. People seem to be going to college just to get a degree with no real idea of how they will use it, which is a waste of money and time in a lot of cases. I’m not saying that only certain people should have degrees, but I do think we need to seriously re-evaluate exactly how important having a degree actually is.