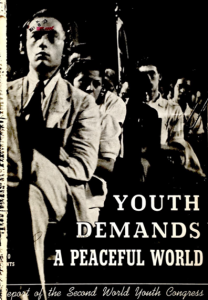 As the 2018-2019 academic year kicks off, I can’t help but think back to my May research trip to Vassar College. All last year, I had a tenuous relationship at best with my thesis work on the World Youth Congress Movement (1936-1939), confident of the project’s potential but confounded by how to assert the significance of a 1930s youth organization that failed to achieve any of its long-term goals. I eventually chose to describe the movement as “an arena of ideological accommodation” during an era that made for strange bedfellows, but there is another sense in which the WYCM has a special relevance in 2018.

This month marks the 80th anniversary of the Second World Youth Congress held at Vassar College in August 1938. President Henry Noble MacCracken’s decision to welcome the group proved hugely controversial among the American public. Critics alleged—not entirely inaccurately—that young communists were over-represented among the movement’s leadership and that liberal benefactors like MacCracken and Eleanor Roosevelt were turning a blind eye to the radical orientation of the group.

The ensuing public relations crisis drew on some of the perennial tensions between academia and society that remain flashpoints today. Just as institutions in 2018 can find themselves in the crosshairs of Campus Reform or Professor Watchlist, the Vassar administration found itself thrown on the defensive by organized groups determined to push back against what they saw as a rising red tide on American campuses (or, in a few cases, rumors that participants would have access to alcohol!).

At the heart of these conflicts then and now is the function of the university as a public square, and whether speech in such a place can be circumscribed. In the months leading up to the Congress, the Vassar Board of Trustees received scores of petitions that condemned the administration for welcoming communists onto campus “in the name of liberalism and free speech.” MacCracken and the Trustees held their course amid the firestorm. “The fundamental problem is that of authority,” MacCracken wrote to concerned alumni. “Shall students be told what to think and forbidden to think otherwise?” He defended the value of engaging with controversial subjects, warning that to forbid them would undermine the legitimacy of the American political system.

Today, free speech is the battle cry of conservatives as they challenge liberals to put up or shut up about the open exchange of ideas on college campuses. The struggle has no simple answers, stemming from the natural tension between the goal of creating safe environments where students can thrive and the intellectual imperative of exposing them to ideological diversity. Free speech has been and remains a contested idea, and neither conservatives nor liberals have been its unwavering defenders when it comes up against other competing priorities.

Another question raised by the Congress was that of the international character of university campuses. Although concerted efforts to build the diversity of institutions were still decades away, the World Youth Congress Movement’s commitment to representativeness earned it the praise of liberal defenders and scorn from conservative critics. Harold Lord Varney, editor of the American Mercury, lambasted the majority of American WYCM supporters as “unrepresentative second-generation hopefuls from alien New York City.” That so much criticism of the movement came tinged with racism and xenophobia made it so much easier for liberals to dismiss the allegations of communist control, especially at a time when they believed so strongly that global security depended on international cooperation and mutual understanding.

The conservative vision of universities being dominated by foreigners and radicals certainly persists today in some quarters. Even more so than in 1938, however, we inhabit a globalized world where students need that exposure to people of different backgrounds and the opportunity to participate in cross-cultural dialogue if they are to be prepared to meet the challenges of the 21st century. And if that interaction facilitates a more peaceful and cooperative world tomorrow, all the better.

Finally, the parallels between 1938 and today point to an obvious truth about colleges and universities: that their primary constituency, young people, are a contested demographic in the political and cultural battle for America. Liberals and radicals see students as the future of their movement; conservatives feel a sense of urgency to undermine liberal hegemony on campus lest institutions be allowed to churn out anti-conservative activists without end. Both groups have long recognized that academia is a place where the future can be forged . . . or destroyed, depending on their perspective. No wonder these battles are so fiercely contested.

Everything has a history, and campus controversies are no exception. It shouldn’t be a surprise to anyone that these conflicts can be traced a long way back. Even still, it was an interesting experience to see familiar elements in the challenges facing Vassar College in 1938, despite how much has changed about higher education in the last 80 years.