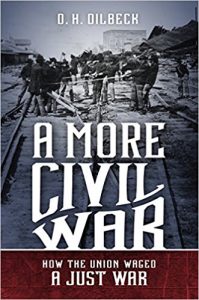 I recently picked up a copy of D. H. Dilbeck’s 2016 book A More Civil War: How the Union Waged a Just War. Given my interest in the intersection of the morality and consequences of war, it seemed like something worth reading. As I went through it, I found myself not thinking of it just as a work of Civil War scholarship but also as a reflection upon the enormous shifts in our understanding of moral warfare since the nineteenth century. This evolution of thought is just one of many cultural gaps that make it so difficult to see the war through the eyes of those who fought it. It is also illustrative of our ongoing struggle to solve the moral paradox of just killing and just destruction. Nineteenth-century strategic paradigms cannot and should not be considered valid today. Even still, giving them consideration may present today’s military leaders and civilian stakeholders (i.e. all of us) a better understanding of how the definition of a moral war—always constructed upon an imperfectly reconciled set of contradictions—has evolved into the nexus of legal and moral precedent in which we operate today.

Dilbeck’s argument is premised on the commitment of the Union to prosecute the war in a way it deemed morally justified. From the outbreak of war, the Union confronted not only the burden of pacifying the South, but also to affirm its ‘civilized’ and ‘Christian’ sense of morality while doing so. In the words of Francis Lieber, architect of the legal framework for the Union’s just war, “Sharp wars are brief.” That is, an enemy must be subdued with all possible power and haste to prevent prolonged and unnecessary suffering. Most importantly, hard war was believed to undermine the enemy’s resolve and to destroy the capability of a vanquished foe to rise again. This interpretation of the war, certainly controversial even in its own time, became the justification not only for the war itself but also for key military policy decisions, including the targeting of civilians, the severe response to Confederate guerillas, and the destruction of buildings and materiel. As devastating as these acts were, Dilbeck maintains that aggression was generally paired with restraint, at least in policy, and the pursuit of a speedy conclusion to hostilities.

It is striking how timeless are some of the challenges faced by Union leadership. In Missouri, officers were tasked with hunting down unpredictable guerillas who could blend in with and receive support from the civilian population. Just as fighting irregular military forces is well enshrined in U.S. history, so too is the difficulty of balancing control with moderation. The Union had to find ways of curbing guerilla activity while minimizing injury to innocent parties (Confederate sympathizers, of course, did not fall into this category). At a fundamental moral and strategic level, this situation is not so different from the moral ambiguities of ongoing asymmetrical wars in the Middle East today. In both cases, the challenge is to maintain control of the occupied territory without creating more enemies and undermining the moral justification of your presence. Likewise, Union government and military leaders had to decide upon the appropriate use of retaliatory measures. In general, they wisely tried to reserve retaliation as a tool to prevent recurrences of Confederate acts deemed unacceptable, and usually proved reluctant to engage in it simply for the sake of vengeance. When I was reading A More Civil War, it was roughly a week after the U.S. had conducted an airstrike on a Syrian airbase used to launch a chemical attack and dropped the “Mother of All Bombs” on a tunnel complex filled with Daesh fighters. I couldn’t help but question whether those actions were taken out of vengeance or a gaudy showing of U.S. power and masculinity. It seems dubious that the president had made the decision to retaliate in the delicate interest of restoring morality to the conflict, given his inconsistencies in policy. Thinking about how Civil War leaders worked to justify their actions reminded me of our own challenges today and ongoing questions about how to confront them. The solutions of Lincoln’s age won’t work for us, of course. So what changed? And what does it mean for us today?

There are many reasons for why we don’t think, as Lieber and his contemporaries did, that wars should be sharp and short. Warfare itself has changed. Sherman’s March to the Sea was nothing like launching Hellfire missiles from Predator Drones or dropping the atomic bomb on Hiroshima and Nagasaki. Was it the Great War that changed our minds about the value of harsh wars? Despite Germany’s efforts to unleash maximum destruction in the summer of 1914, the war’s sharp beginning gave way to a prolonged and bloody stalemate for roughly the same duration as the American Civil War. Or was it the unprecedented human catastrophe of the Second World War that drove home for us that some elements of all-out war were not worth shortening the conflict? As the two world wars proved, destructive military decisions beget the same from foes, negating some of the advantage while invoking much more devastation. Certainly, by Vietnam and Korea, America felt much more ambiguous about the morality of warfare—worthwhile, but never short enough for its cost in treasure and lives; overthrowing political enemies using the CIA proved a much more morally-justifiable solution. Moreover, the advent of nuclear arsenals and mutually-assured destruction all but guaranteed that the next war would be short, indeed, and the end of human life as we know it.

Two weeks ago, Bryan and Heather considered the question of how to learn from the past without falling for fallacies and superficial parallels. Here is another question that falls in that delicate gray area between irrelevance and utility: Are there morality lessons about warfare today that can be gleaned from looking at distant precedent? Perhaps. At the very least, I certainly don’t believe in prosecuting a vigorous hard war in 2017, but I don’t think the half-measures we took in Iraq and Afghanistan did us many favors.

Right or wrong, Northern leadership believed that prosecuting a hard war was a way to “temper the tragedies” by bring them to a speedy conclusion. When we look at our wars today, is this our policy priority? If not, should it be?

3 replies on “Holding the Moral High Ground: Reflections on Just War Then and Now”

This was a good read! Interesting that a swift and devastating punishment in order to quell the enemy was used as a moral justification by union leaders when the enemies in the American Civil War were their own countrymen, at least from the point of view of the union. Certainly Sherman’s march to the sea did the country no favors in the reunification process as all it accomplished was to give southern states even more reasons to harbor resentment and to effectively hobble their economy which again, having won the war, affected the northern states as well. Not to mention that it took place at the end and after the conflict.
Regarding your musing on the world wars, I would have to say that the second world war, in my opinion, is the more likely of the two to make the case against harsh warfare for a swift end. The first war is an example of what someone might hold up as what happens when swift, decisive action is not taken re: the bloody stalemate you mentioned. The second war, with the devastation and civilian casualties caused by the now infamous American atomic bombs and the German Blitzkrieg (perhaps arguably the Japanese Pearl Harbor attack as well, though the devastation was not as widespread), presents a better moral case against an iron fist in my opinion. Certainly the atomic bombs can be bandied about as good support for sharp warfare as they did indeed put an end to the war but I would argue that, from a moral standpoint, wiping two civilian cities off the map is not a just mean to any end. Of course, I believe that the only reason any moral justification for war can be made is because we don’t count soldiers as people until after the fighting is over, but that is my pacifism showing through.

Thanks Riley–you make an excellent point about the enemy being fellow Americans and its implications for just war policy. I believe another of our writers plans to tackle this in a future post.

I also agree on nuclear weapons. They fall in a very different category altogether. It’s curious (and saddening) how many people are able to excuse them as necessary but consider Sherman’s campaigns out of line. I’m afraid there’s a bit of racism, toxic reconciliationism, and American exceptionalism baked into that. “It’s okay to nuke the Japanese but not wage hard warfare against ‘our fellow Americans.'” I sometimes raise this point as a thought experiment with members of the public.

Looking forward to that post, quite a juicy subject!
I agree with your assessment of the sentiments behind the differing viewpoints; though it is depressing how quickly ‘American exceptionalism’ will fold to racism and xenophobia in cases like the Japanese internment camps. Or even more modern examples of increased hate-crimes after a terror attack.
The only “positive” thing I will say about the atomic attacks is that they may have had something to do with preventing the cold war from escalating to full-scale nuclear war, simply by demonstrating how devastating such weapons would be if used. Of course, that may be wishful thinking on my part.