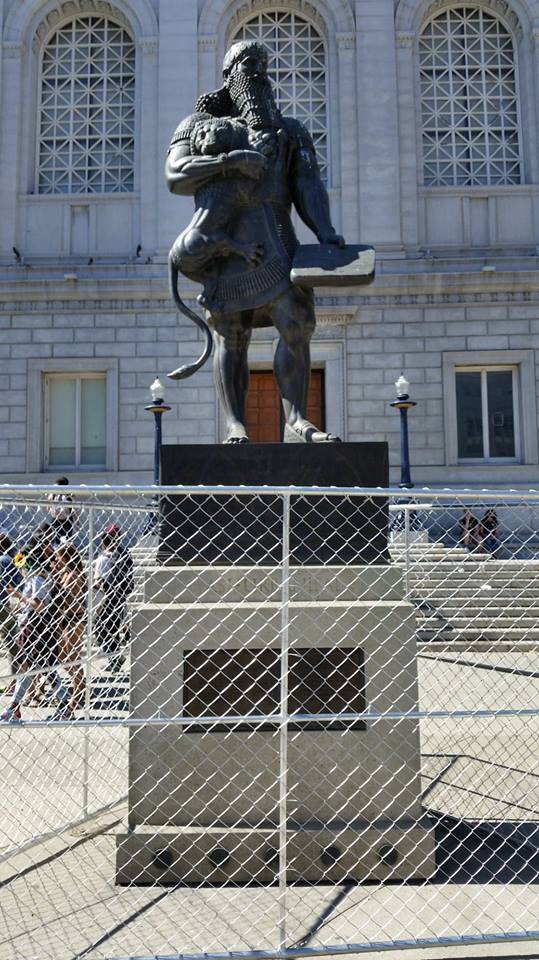 One hot afternoon this June, Heather and I made our way up to San Francisco from our new(ish) home in the ‘South Bay.’ It was, and still is, our first full summer out here in the Bay Area, and we wanted to see the sights, take in the ambiance, and check out the legendary San Francisco Pride events. While strolling around the green space outside City Hall, I was intrigued to see a statue from behind that seemed to beholding an animal. This was indeed the case, and as my surprise at seeing a miniature lion in a statue’s arms began to register, I was floored by an even bigger realization: this was a statue unlike any I had before seen in America. This is not to say I hadn’t seen it before; images of similar statues adorned the pages of some of my favorite textbooks from high school and college. We had even had the pleasure to see some in real life at the British Museum during my time in Oxford. Here, in northern California, staring back at us outside of San Francisco City Hall, was an ancient Mesopotamian statue.

Upon close inspection of the inscription and plaque adorning the statue’s pedestal, we learned that the figure before us was Ashurbanipal, emperor of ancient Assyria. For those unfamiliar with the details of ancient Mesopotamian history, Ashurbanipal reigned from 668 to 627 BC as the last strong ruler of the Neo-Assyrian Empire, the first Near Eastern empire to rise after the Late Bronze Age collapse. Ashurbanipal made Assyria the largest empire the world had yet seen, and collected the first great ancient library in his royal compound in the capital city of Nineveh (of Jonah and the Whale fame). This latter is most likely the reason for the modern statue’s placement, looking across the city’s Civic Center at the San Francisco library. As it turns out, we had not just seen statues like this one at the British Museum; we had actually seen Ashurbanipal’s original palace reliefs, as well as his library of cuneiform tablets!

While the placement of the statue was solved, it’s inscription was another matter. There were actually two different inscriptions. The first related that the statue had been commissioned by the Assyrian Foundation for the Arts, sculpted by Assyrian artist Frank Parhad, and given to the city of San Francisco as a gift from the Assyrian people in 1988. It then went on to summarize the history of Assyria, Ashurbanipal, and the Assyrian culture to the modern day. Upon reading the second inscription, however, my eyes opened in bemused disbelief. In the hand not holding his lion, Ashurbanipal bore a clay tablet with a cuneiform inscription, translated below:

Peace unto heaven and earth

Peace unto countries and cities

Peace unto the dwellers in all lands

What? I certainly understand that the statue was donated as a gift of good will, but this was a bit much. Cambridge historian Mary Beard has noted that there’s really no such thing as a good emperor or bad emperor; they’re all autocrats. She describes Rome, yet the same sentiment applies here. In fact, even among other empires, the Neo-Assyrians are historically known for their cruelty and merciless suppression of rebels. For Ashurbanipal, himself reputed to be one of the more cruel Assyrian emperors, to bear such a message is nothing short of laughable. The icing on the cake was a line contained in the first inscription’s historical summary, which holds the prize for oddest description of an empire, particularly an ancient one: “The empire spread east and west to touch the lives of all Near Eastern people.” It’s not technically wrong, but maybe, shall we say, a little too rose-tinted.

If this complicated bit of historical memory and myth-making wasn’t enough, however, the drama of this unexpected monumentalization was still not finished! As I began researching the origins of the statue, I found that its erection had been accompanied by objections and criticism from scholars and the Assyrian people! The portrayal of Ashurbanipal, in a skirt and bearing the tablet and lion, struck many Assyrians as a grave misrepresentation of their beloved cultural figure, and were more suited to the famous Mesopotamian hero Gilgamesh. Assyriologists in turn noted that the statue really bore no resemblance to either Ashurbanipal or Gilgamesh, but was rather some kind of generic Mesopotamian protector figure.

So, next time you find yourself in downtown San Francisco, take a stroll by City Hall. Marvel at the Museum of Art, relax on the lawn outside, or learn something new in the library. As you do, watch out for the Assyrian emperor who probably isn’t that emperor welcoming you with a peaceful greeting that probably would never have crossed that emperor’s mind.