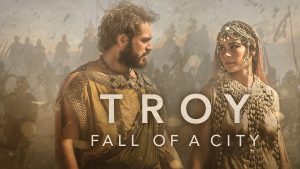 Regular readers of Concerning History will be well aware of my affinity for the swords and sandals genre. It should come as no surprise, then, that my ears perked up when learning of the new South African/Netflix miniseries Troy: Fall of a City. My previous review of the movie Troy (found here) acknowledged that that film took great liberties with its ancient source material, sometimes for the best. An epic poem on the level of the Iliad is impossible to adapt in only two or so hours; would 8 hours of television serve better to bring Homer’s vision to the screen? The answer turned out to be both emphatically yes and emphatically meh.

Troy: Fall of a City is without a doubt the most faithful version of the Homeric saga I’ve ever watched. Certain drawn out elements or minor side adventures like the catalog of ships may be left out, but the sheer number of story elements taken straight from the Iliad and other myths from the Trojan War saga is impressive. From the origins of the war lying in a divine beauty contest to Paris’s origins to exactly who survives and leaves with whom, the show remains admirably faithful to its source material. Surprisingly, however, all this faithfulness when realized on screen is somewhat underwhelming. Devoid of the epic grandeur of Homer’s language, whether in original ancient Greek or in modern translation, the actions of Troy’s characters seem drab and plain, just acting out another generic ancient period piece. Even the bold decision to explicitly include the Greek gods falls flat, as what I imagine to have been budget constraints resulted in no actual displays of divine power. Indeed, the gods themselves just look like normal people, and there is no aura of grandeur or mystery surrounding them to make them seem like anything other than random humans messing around.

Ironically, what does shine in Troy: Fall of a City are the decisions it makes to fill in the gaps of the Homeric tradition. For those unaware of the details of the saga of the Trojan War, the Iliad only covers the events of Achilles’ feud with Agamemnon and the subsequent death of Hector, ending with Hector’s funeral games. The war had been ongoing for ten years before the poem opens, and continues for an unspecified duration afterward. The events before and after the Iliad were told in other works and traditions which largely do not survive in their own right. We can only glimpse their contents through indirect mentions in other sources and, commonly, other art media like statuary and vase painting. There are thus significant gaps that creative storytellers can fill in while remaining true to the events of the Iliad, and Troy: Fall of a City does this in a spectacular manner. The choice to focus on Paris and Helen as main characters (and not just plot devices) is welcome, as is the decision to make Paris a sympathetic hero rather than a simpering courtier. There is also laudable depth given to Agamemnon through the inclusion of a certain sacrifice on the isle of Aulus (no spoilers!). Rather than simply a haughty and unlikeable king, Agamemnon becomes a character haunted by his actions and driven to ensure they were not in vain. Other changes are more superficial; proponents of diverse casting will appreciate the decision to cast Aeneas, Achilles, and Zeus as black, and while the former two may not historically have been so, they also would definitely not have been as white as the rest of the cast, either (Classicists will find it hilarious, however, that the only explicitly black character in the Trojan War saga, Memnon the Ethiopian, is entirely absent).

In the end, Troy: Fall of a City is nothing spectacular, yet nothing objectionable. If you are looking for a nice romp through the Bronze Age, you’ll enjoy the exquisite sets and mostly-good material culture (save for the highly-regrettable inclusion of stirrups, almost two millennia before their invention). If you are looking for a transcendent retelling of Homer for the modern age, however, you may or may not be disappointed. I certainly enjoyed it (and its Odysseus, played by Joseph Mawle, who some might recognize better as Game of Thrones’ Benjen Stark) well enough for a sequel, and the delivery of the final episode and the fate of Troy is executed in such a way that demands a follow-up of some kind, if only to deliver justice for all the deeds just committed.

One reply on “Faithful, with Liberties: Netflix’s Troy: Fall of a City”

There is always a fine line to walk with adaptations, interesting to see the choices that were made here. Sounds epic, in the truest sense of the word!