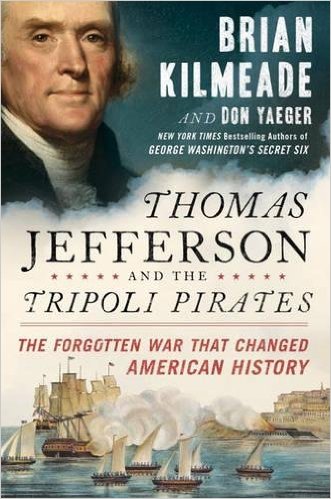 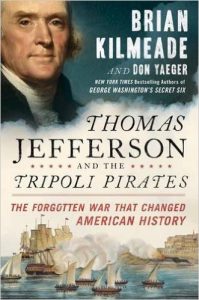 Abandon ambiguity, all ye who enter here. Brian Kilmeade and Don Yaeger’s Thomas Jefferson and the Tripoli Pirates reads like an adventure novel, complete with dashing heroes, daring deeds, and a suitably triumphant conclusion. The events themselves that Kilmeade and Yaeger are concerned with are related competently enough. Its trade threatened by the privateers employed by the North African states of Morocco, Algiers, Tunis, and Tripoli and unwilling to pay a preventative tribute, the United States under President Jefferson embarked on a series of naval operations designed to enforce a peace more conducive to American commerce and in so doing took the first steps toward increased American prestige and involvement beyond its own shores. In the process, however, Kilmeade and Yaeger produce one of the most unaware and insular works of history I have ever had the misfortune to read.

My first warning was contained in the book’s subtitle itself. “Forgotten” is a peculiar choice to describe the Barbary Wars, as it is standard material in many American history courses from grade school to college. I myself have covered it no less than four times, the earliest being in fifth grade. Brian Kilmeade being the host of the television program Fox & Friends (and citing figures with such problematic relationships with history as Roger Ailes, Bill O’Reilly, and Glenn Beck as inspirations) did not help either. It came as no surprise, then, when the authors’ narrative proved to be a sloppily one-sided affair. Not a single source, primary or secondary, used by Kilmeade and Yaeger was written by a non-American author or focused on a non-American perspective. By their own admission, Jefferson undertook an extensive study of the history of the Barbary corsairs in order to better recommend ways to deal with them, but the authors cannot be bothered to actually give their readers any of that presumably rich historical context. With every one of their sources instead dripping with the condescending racism so typical of nineteenth century America, the result is a dehumanizing caricature of the North African opponents of the United States. The Muslim states, rulers, and corsairs are portrayed not only as lawless and antagonistic, but treacherous, barbarous, uncivilized, and subhuman. This even extends to the authors’ use of terminology. The archaic spelling of the Egyptian Mamluk dynasty (Mameluke) is used multiple times, and the egregiously outdated and insensitive ‘Mohommedan’ is even used once in place of ‘Muslim’ outside of any primary source quotation. The ensuing picture is one more fit to describe J.R.R. Tolkien’s fictitious Corsairs of Umbar rather than any historical actors.

Running parallel to this subtly (and at times not-so-subtly) racist narrative is Kilmeade and Yaeger’s inability to critically examine any American actions or motivations. Upon reflection, the actions of the United States in this conflict betray a breathtaking arrogance. To conduct large-scale operations with an untried navy against four foreign powers more than 3,600 miles from home and with limited options for resupply would surely have been considered the height of hubris if it had failed, and would certainly not have been considered so quickly if facing a ‘civilized’ Christian opponent. Even certain American strategies reek of idiocy, such as multiple plans involving the engagement of fortified shore batteries by solitary American vessels. Yet this doesn’t trouble Kilmeade and Yeager, as the full extent of American good fortune is brushed over as a matter of course. The diplomatic quagmire that occasioned these operations is also treated with a bullish lack of perspective. America is not responding to diplomatic slights a newly-independent nation can ill-afford to bear, but is instead avenging absolute humiliation and making a defiant stand against anarchy, tyranny and, yes, terror. It is enough to make one wonder whether the authors intended their narrative to justify certain modern feelings toward the Muslim world. Indeed, all attempts at negotiation or achieving peaceful solutions are uniformly dismissed as cowardly or misguided, and saber-rattling can be found on nearly every page.

The most egregious instances of such ahistorical writing can be found in the confluence of these two aforementioned themes. Kilmeade and Yaeger begin their work with the admirable goal of gaining increased attention to the servicemen who died or suffered in captivity during the years of conflict with the Barbary corsairs. While the capture and imprisonment of sailors cannot be divorced from this story, it quickly becomes the prime avenue through which the United States’ opponents are vilified. The horrors suffered by (white, Christian) Americans during their ‘enslavement’ by (brown, Muslim) corsairs are lingered upon in excruciating detail, even to the point of erroneously asserting that the Ottomans were still taking young boys as slave soldiers in the nineteenth century. Yet all of this talk of an admittedly repulsive tradition of human bondage occurs without once reflecting on the much more extensive, much more horrific institution of human bondage being perpetuated simultaneously in the United States itself. Similarly, numerous instances of ‘treachery’ on the part of the Barbary states are gloated over, be it the false surrender of a warship or the summary renegotiation of treaties. Yet Kilmeade and Yaeger are silent concerning the United States’ rampant betrayal of its own treaties and agreements with Native American peoples that continued for centuries. As a result, the most enduring message of Thomas Jefferson and the Tripoli Pirates is that the brown man’s villainy appears to be the white man’s pragmatism, and that such books are still being published in 2015 speaks to our desperate need as a nation to own up to our own villainy.