Bryan Caswell graduated from Gettysburg College in 2015, majoring in History with minors in Classics and Civil War Era Studies. Bryan then attended the University of Oxford, from which he graduated in 2016 with a Master of Studies in Global and Imperial History. Aside from specializing in the American Civil War and the British Empire, Bryan also dabbles in the ancient Mediterranean and Near East, early medieval Europe, and war studies in general. Originally from Pittsburgh, Bryan now resides in Birmingham, Alabama with his fiancée, Heather.

Kevin Lavery earned his B.A. from Gettysburg College in 2016 and his M.A. from Columbia University in 2018. A proud son of Hershey, Pennsylvania, Kevin also enjoys local history and hiking the Appalachian Trail.

Heather Clancy hails from historic Coronado, California and in 2015 completed her undergraduate studies at Gettysburg College, where she majored in History with a double minor in Civil War Era Studies and German Studies. Although her historical interests are wide reaching, Heather gravitates toward subjects of complex and contentious memory. 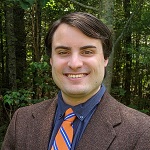 Ryan Nadeau is a 2016 graduate of Gettysburg College, studying History and Political Science, and earned his MA in History and MLIS from the University of Rhode Island in 2021. Originally from the Mid-Coast region of Maine, he currently works as a college librarian in Lancaster, Pennsylvania.  His primary historical interests are in the political and diplomatic history of both the United States and Europe, but also enjoys writing and thinking about food.

Francis Butler is a public Middle and High School History teacher in Connecticut. With a B.A. in History from Siena College and an M.Ed. from the University of Notre Dame, he seeks to make history class a dynamic exploration of the past. His historical interests include U.S. History with an emphasis on the Early Republic, Civil War, and Reconstruction, the history of World Religions, Ancient and Medieval Mediterranean history, comparative World History, the Atlantic World Revolutions, and the history of nationalism.