I’ve written about education a couple of times this year, first interpreting the commencement speeches of Dwight D. Eisenhower and later criticizing the concept of “patriotic education.” At their core, these posts both speak to a fundamental question in our society:

What’s the purpose of education?

It’s a question that can be answered in many ways. One set of responses involves the degree to which education is meant to prepare students for life, work, or citizenship. Another focuses on whether education should perpetuate the social order or challenge it. The answers we give are not mutually exclusive, but they do have implications for the time and resources we allocate.

These are complex and valuable debates that have largely been abandoned by the public during the COVID-19 pandemic. Whatever the purpose of education, the United States clearly sees education as a subordinate interested to short-term economic interests. In recent weeks, school districts like New York City have paused in-person instruction while other disease vectors remain open because of political expediency and economic logic. Worse, politicians, business leaders, and even parents have treated schools and colleges as if their main function is to warehouse children and young adults.

Of course, it’s not at all surprising to see education treated as proxy battlefields for broader social conflicts. As two books I read this fall reminded me, these conflicts cut to the heart of American democracy. 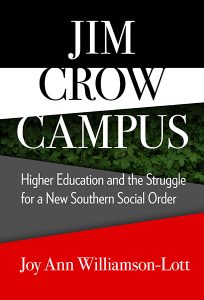 The first of these was Jim Crow Campus: Higher Education and the Struggle for a New Southern Social Order by Joy Ann Williamson-Lott. I’ve written before about campus political controversies in the 1930s, and how closely today’s battles over campus speech resemble them in form and fashion. It shouldn’t have come as a surprise, then, to read about the struggle between faculty, administrators, trustees, and taxpayers over the role of universities during the Black freedom struggle, but it’s still remarkable how familiar these struggles seem.

In the book, Williamson-Lott explores how white elites punished students and professors who dared speak out against the South’s racial order. At times, they accused anti-segregationists as being subversive communists, much as conservatives today characterize all left-wing protests as “antifa.” Universities also came under attack from state legislators, such as those in Mississippi who enacted a speaker ban in 1956 to prohibit speakers on the basis of their political positions.

The conflict over Southern universities prefigured contemporary conflicts between campus politics and the public sphere. One thing that stood out in particular was the harassment of faculty by politicians and the public if they dared speak out on race, a situation I witnessed firsthand this summer. For some people, then and now, the marketplace of ideas does not extend to those that challenge racial hierarchies.

Only the imperative to chase prestige and federal funding lured Southern trustees and administrators away from their commitment to perpetuate overt white supremacy, for which Williamson-Lott credits faculty, students, and administrators who reframed the debate in terms of academic freedom. 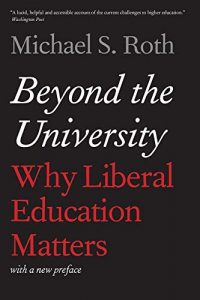 The other book, Beyond the University: Why Liberal Education Matters, was written by Wesleyan University president Michael Roth, who I had the opportunity to hear speak in January. In his treatise, Roth narrates the genealogy of liberal education in America from Jefferson to today.

Although his account runs parallel to Julie Reuben’s in The Making of the Modern University, his focus on the university’s role in learning rather than research. Roth rejects the idea that education is to produce specialized research or manufacture automatons. Rather, in the tradition of Jefferson, Du Bois, and Dewey, he emphasizes the role of liberal learning in cultivating citizens, able to process complex issues, listen to different points-of-view, and cultivate empathy.

The book is a spirited defense of liberal learning against disrupters and politicians who emphasize workforce development and distilling education down to its core economic value. It’s not that preparing students for careers is unimportant to Roth, it’s just that work is only one facet of living in a democracy. Moreover, Roth argues, liberal learning shouldn’t be limited to the so-called future leaders of America—but to be a part of everyone’s education if they want it. After all, in the democracy we aspire to be, the farmer in Wisconsin and the bus driver in Mississippi have the same civic responsibilities and privileges as an Ivy-educated political junkie.

So back to the original question: What’s the purpose of education—especially in an education system characterized by ideological conflict and pervasive inequality?

In a democracy, the purposes of preparation for life, work, and citizenship are deeply connected. Through liberal education, students have the opportunity to integrate their lived experience and apply what they’ve learned across these domains. To restore the fabric of our democracy, we have to be able to discern which ideas and institutions we need to defend, which ones we need to reform, and which ones we need to abandon. We can’t do that without being able to make sense of issues, integrate ideas, and work together across difference.

Education is especially critical in this age of misinformation, fake news, and radicalization. It’s not a panacea or even a vaccine, especially because it embodies the same problems facing society more broadly. But the strength of democracy is correlated with the vitality of education. We cannot cave to the cynicism that the system is too broken to do any good. Otherwise, education’s only purpose will be to perpetuate privilege and social hierarchies. Believers in education and democracy have to make progress where we can, and hold our ground where we have to. As John Dewey wrote, “Democracy has to be born anew every generation, and education is its midwife.”