Many of us here at Concerning History enjoy consuming our favorite subject through more than just books, movies, or television. The increasingly-complex digital technology of the twenty-first century offers all manner of video games through which the public can engage with history, not to mention the array of complex tabletop games in this renaissance of adult boardgaming. In a bit of fun reflection, then, our staff offers their own thoughts on the state of historical gaming and their own personal recommendations for those wanting to interact more actively with simulations of the past. 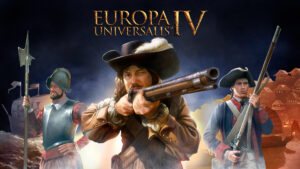 In what should come as no surprise to anyone who knows me, the vast majority of my list will be some form of strategy game. Indeed, it seems like strategy is the dominant medium though which history enters the gaming world. For me, however, Europa Universalis IV stands on an entirely different level than anything else out there. Set in the early modern era, Europa allows players to choose any polity that existed in 1444 (or any of over a dozen later historical starting points as late as 1815) and run their country up until the game’s end date of 1821. I often remark that Europa is less a game and more of a simulation; from its complex diplomatic, economic, and mercantile systems to its mechanics for colonization, prosecuting war, and suing for peace, Europa can be as daunting as it is accurate to the spirit and fact of its chosen age. In fact, that accuracy can at times go overboard; in a game so ripe for sandbox enjoyment, the intentional hamstringing of non-European peoples through sub-par technology trees and rigged institutional development can be infuriating, just like in the actual past. 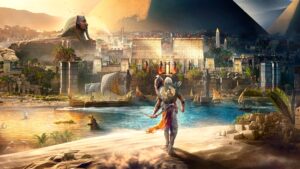 As a student of history and an avid gamer (after a fashion), I couldn’t avoid the Assassin’s Creed franchise forever. I’ve written before on some of its problematic storytelling, but by and large I’ve been more than impressed with the games’ commitment to recreating their historical settings, which to date include Classical Greece, the Viking Age, the Crusades, Renaissance Italy, the Golden Age of Caribbean Piracy, Revolutionary America, Revolutionary France, and Victorian Britain. Yet above all these, by far my favorite game has been that set in Hellenistic Egypt on the eve of Roman conquest. Origins recreates the kingdom of the Ptolemies in gorgeous open-world detail. There are tombs and oases and dangerous wildlife aplenty, of course, but there is also painstakingly-researched cultural syncretism between the native Egyptians and their Greek/Macedonian ruling class, seen both in story and in geography through the prevalence of Greek temples alongside Egyptian cults. While the game itself was likely a tad longer than it needed to be, I cannot say I ever tired of playing through its setting. 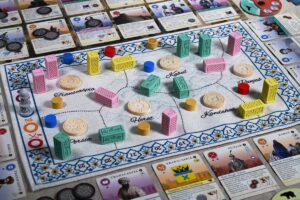 I don’t quite know how the Facebook algorithm knew to recommend this Kickstarter project to me back in 2020, but I’m certainly glad it did. I previously wrote of my desire for a television series focusing on the “Great Game” of spycraft and diplomacy between Britain, Russia, and Afghanistan in the middle of the nineteenth century, and while that is yet to arrive, you can now play through those events in boardgame form in the brilliant Pax Pamir. Cole Werhle’s made-to-order game could easily have been named my Most Accurate; it is impeccably researched, and the back of its manual even lists his historical inspirations and recommended further reading (which, of course, was the book I originally read on the subject and inspired my television proposal). Designed for anywhere from one to six players, Pax Pamir is a fantastic example of historical gaming at its best. 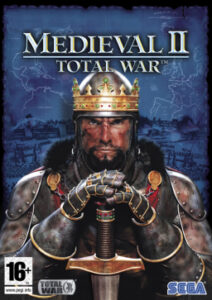 While it will redeem itself in a few entries, the Total War franchise unfortunately takes the prize for the game that has disappointed me the most. Medieval II is passable as a game, but as a piece of historical media, it fails over and over again. Its system of papal approval is interesting, but misguided for the period (and leads to stagnant expansion for almost half the game), while its factions are laughably wrong for the years in which the game starts. Some of its more accurate content, like Guilds only popping up in cities where their trade has proven high, actually makes gameplay unspeakably tedious. While some of its DLCs prove much better, I have never gotten even the hint of a desire to replay it in the six years since I originally completed it. 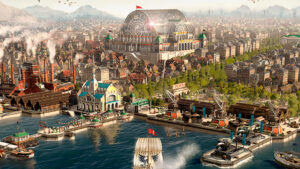 Another chance discovery, Anno 1800 was in contention for a number of categories on my list, but I had to settle for it here. Like other games in the Anno series, Anno 1800 tasks you with designing, building, and governing a city, this time in the broadly-defined Industrial Age. With all DLCs, this quickly becomes the designing, building, and governing of an entire empire spread across four continents. For a student of the British Empire, I have seldom had more fun with an historical game, nor more sympathy for the real-life actors who had to manage such an empire everywhere and all at once. My guilt, however, stems from its accuracy, or lack thereof. Simplifying class into discrete categories of laborer who each only require certain specific goods for their well-being and happiness can verge on the insulting (and puzzling, with provisions for fire and riot safety, but the complete absence of any sanitation facilities beyond hospitals), while Anno’s careful sidestepping of the brutalities of expanding your empire allows players to ignore what should be worrying implications of their actions. It is also one of the most open-ended games I’ve ever played; it is very possible I will still be playing my original game years from now, tweaking my layout to fit just one more animal in my zoo without sacrificing the rail line to the nearest power plant. 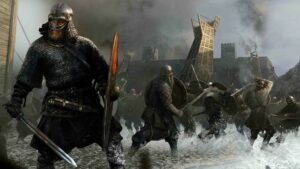 For my money, the Total War franchise has hit upon the ideal balance of playability and accuracy in its long-running historical strategy franchise, none more so than my current favorite, Attila. Essentially a fuller, more modern version of their original Barbarian Invasions DLC for Rome: Total War, Attila is a gorgeous game that brings Late Antiquity to vivid life. The ability to recruit foreign prisoners to refill your armies’ ranks, the successive decline in regions’ fertility, and the wholesale destruction (and re-founding) of cities places the player fully into this fraught era of old systems collapsing and new societies stepping into the spotlight. The virtual deification of the game’s namesake as the Huns begin to move westwards might not be historical, strictly speaking, but it certainly captures the modern memory of the man. Its DLCs, too, are not to be missed, extending its terrific gameplay into the sixth and ninth centuries respectively, resulting in the Early Medieval period getting all the gaming love I could ever want (except, of course, for a Muhammad: Total War DLC, but that’s likely never going to happen).

With my usual plea for Early Medieval content so well satisfied by Attila, my hopes now turn to my other great fascination: the Late Bronze Age collapse. This setting is perfect for the classic Total War model: a wide array of polities competing for dominance across a wide geographic area in a time of great cultural, political, and technological change. The game would likely begin in the Middle Bronze Age, allowing for factions like the Minoans and Hiksos alongside such mainstays as the Mycenaeans, Hittites, Babylonians, and New Kingdom Egypt. The franchise has tested the waters here with Troy: Total War, but this seems more confined to a “historical” inspiration for the Homeric epics; I want a game of breathtaking scope so I can finally see this period of triumph and tragedy fully realized in a visual, interactive medium.