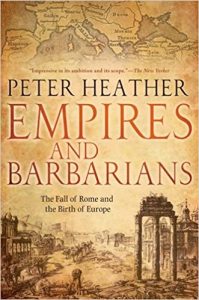 Peter Heather. Empires and Barbarians: The Fall of Rome and the Birth of Europe. Oxford: Oxford University Press, 2009.

Snapshots of Europe taken at the beginning and end of the first millennium AD could not appear more different. As the millennium opened, Rome was just reaching the apex of its imperial might. The traditionally dominant Mediterranean world extended its tendrils of control across the Celtic world of modern-day France and lowland Britain, while beyond the Rhine and Danube frontiers Germanic peoples pursued a subsistence existence much less developed than their Roman and Romanized neighbors. One thousand years later, Mediterranean dominance was a distant memory. Germanic cultures and kingdoms had replaced Roman imperial rule. Europe’s center of balance had moved decidedly northward, and the eastern plains and forests boasted new states formed by Slavic peoples. Gone was the unequal pattern of development, and the map of modern Europe had largely, if blurrily, taken shape. This Late Antique/Early Medieval period, as Western Rome crumbled and fell and ‘barbarian’ kingdoms took its place, has long fascinated me, and so I was excited to get my hands on a somewhat general, approachable history of the period by Kings College, London historian Peter Heather. While I found Heather’s work greatly informative, my hopes of reading a sensible, comprehensive narrative of this period were unfortunately left unfulfilled.

Empires and Barbarians is more properly a history of migration and development. The first millennium was a millennium of massive social and cultural change across Europe, and saw no less than four periods of migration (Germanic I, Germanic II, Slavic, and Scandinavian) and three invasions of Eastern steppe peoples (Huns, Avars, and Magyars). Heather’s purpose is twofold: to explain how the millennium’s opening patterns of development influenced migration flows, and to re-examine the character of these migrations in light of historiographical trends, archaeology, and contemporary textual evidence. In his first endeavor, Heather succeeds spectacularly. I have never read a more informative and convincing treatment of Europe’s development, the influence of empires, from Roman to Holy Roman, in changing it, and the resulting explanations for why peoples moved and were able to overcome Rome when they did. Heather’s final takeaway (the so-called Third Newtonian Law of Empires), is cogently argued: “The exercise of imperial power generates an opposite and equal reaction among those affected by it, until they so reorganize themselves as to blunt the imperial edge.”

Heather’s second body of argument, however, is more troublesome. The original characterization of Germanic migration and the fall of Rome, penned in the nineteenth century, was one of entire peoples on the move, laying waste to entire landscapes and repopulating them wholesale. This view has justifiably been cast aside (and Heather is quick to recognize its flaws), but has been replaced by a reluctance to consider any kind of mass migration during the first millennium. Heather aims to rehabilitate the model of mass migration, adding complexity and proving that it provides the only reliable explanation for Europe’s drastic cultural shifts after Rome’s decline. While Heather’s conclusions are certainly plausible, none land with real force. Heather does reference modern archaeology at times, but the bulk of his evidence is drawn from analyzing primary sources and arguing for their trustworthiness. Not only does this base his argument on too shaky a foundation for my taste (my years studying ancient history have left me with a healthy skepticism of sources for which ‘contemporary’ and ‘trustworthy’ mean that the author was only writing fifty years afterwards and hundreds, rather than thousands, of miles away), but it leaves Heather arguing past or simply not mentioning any archaeological uncertainty, lack of evidence, or contrary explanations. Comparisons with modern patterns of migration are also liberally employed, and though informative, one can’t help but wonder whether Heather is applying his comparisons too uncritically at times. Some oversights of logic also arise. When Germanic peoples re-organize patterns of land distribution, for example, Heather goes right to complex explanations of the size of immigration and networks of patronage, rather than addressing however briefly the basic possibility that incoming, non-Roman peoples would not understand or be able to preserve a foreign, Roman system, no matter how theoretically advantageous it would have been.

A second, more general problem with Empires and Barbarians is its deficiencies in telling a comprehensive narrative of the period it covers. Heather certainly never claims to be offering a general history of the first millennium (though perhaps his title should have been changed to something a bit more descriptive), but in biting off the entire first millennium Heather is forced to curtail his discussions even of his particular niche. He only discusses Germanic, Slavic, and Scandinavian movement, and does not similarly examine the invasions of the Huns, Avars, and Magyars in their own right, even though the Scandinavian raids and invasions of the ninth century bear a striking resemblance to the activity of the Huns and later stepped nomads obliquely mentioned by Heather. The lack of a guiding narrative also means that readers unfamiliar with the details of the first millennium’s political history may find themselves un-moored from the reasons and time frames that governed this history, leaving them with an incomplete or warped understanding of events.

Despite these problems, I highly recommend reading Empires and Barbarians (if you can stomach its formidable six hundred pages). The invasions, collapses, and transformations of the first millennium are endlessly fascinating in their own right, and are as underserved in the public consciousness as they are pivotal for the shape of modern Europe. You will certainly emerge from Heather’s work with a wealth of information, and perhaps be motivated to seek further reading on the kingdoms, figures, and battles of which only tantalizing glimpses were offered in his pages.