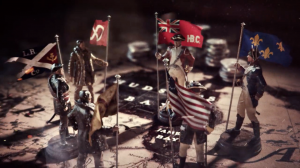 Eighteenth- and nineteenth-century trade on the American frontier has seen a slight increase in its media depictions in recent years, and I couldn’t be happier. With such offerings as The Revenant and Taboo, the brutal misery and cutthroat business of imperial exploitation in the (by then not-so) New World have been brought compellingly to life. I was excited to learn of another addition to this genre with Netflix’s Frontier. Focusing on the struggle for dominance in the fur trade around Hudson’s Bay in the late eighteenth century, Frontier offered an intriguing possibility for exploring the changing face of empire in America after the cataclysmic shifts of the Seven Years War and American Revolution.

The monopoly and profits of the Hudson’s Bay Company are slipping as Frontier opens, due mainly to the efforts of Declan Harp (Jason Mamoa), a former Company man of Native American heritage who is conducting a campaign of terror against HBC outposts. Smelling blood, other competitors have begun muscling into HBC territory, particularly the Low River Company based out of Montreal under their shadowy American benefactor, Samuel Grant. The unscrupulous Lord Benton is dispatched from London to deal with the situation, and en route discovers a stowaway in the form of the young Irish urchin Michael Smith. Coerced into Benton’s service in return for the freedom of his imprisoned love, Clenna, Michael is tasked with finding Harp, earning his trust, and ensuring his downfall. Meanwhile, in Fort James, the savvy ale house owner Grace Emmerly attempts to manage her own prospects and safety by pursuing a business partnership with Benton’s dangerous and unhinged right-hand, Captain Chesterfield. All these players and many more besides must navigate a tangled web of motivations and emotions as they seek to come out on top in the pursuit of the north’s brown gold. 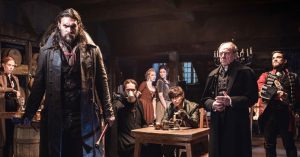 The history contained within Frontier is somewhat difficult to assess. Yes, the Hudson’s Bay Company was a real entity and yes, the fur trade was a risky business that promised a fortune to many, but none of the characters or events in Frontier are historical or, to the best of my knowledge, even at all inspired by actual events. It is simply a story of wheeling, dealing, and killing set against an appropriately gritty historical backdrop. That backdrop, though, is beautifully realized. Aside from the stunning scenery, the costuming and material culture is generally superb, particularly in the uniforms of the HBC soldiers and their officers. The dialogue is filled with accents that emphasize the polyglot cultural makeup of the British Empire in North America, from Scotch to Irish to French to Native American. Native characters are also gratifyingly played by actors with the appropriate heritage. A number of interesting themes also present themselves throughout Frontier’s narrative: the efforts and intrigues enterprising women must undertake to compete in a heavily patriarchal society; the hardening of men on the frontier so that they are no longer recognizable by their European kin, and their accompanying dilemma between embracing either wild, hopeful America or comfortable, familiar Europe; the place of mixed-race individuals in a world where neither society wants them; the plight of indigenous peoples as they attempt to negotiate a middle ground for their own survival.

Frontier’s great downfall, however, stems from its inability to deliver on its potential due to its brevity: the show comprises only six episodes of forty-five minutes each. The story thus careens onward as characters are frantically introduced, evolve, and in many cases discarded. Relationships, romantic and otherwise, are given no room to organically develop, let alone breath, and numerous storylines turn out to be wholly irrelevant to the show’s main plot, which fails to even conclude itself. Each development in turn is rather predictable, and if any of the aforementioned historical themes was ever intentionally included, none were given satisfactory attention or fulfillment to show it. One theme is even conspicuously absent: Michael’s Irish heritage fails to have any bearing on his attitudes towards British authority. The mustache-twirling, prisoner-torturing Lord Benton is particularly bad; his appointment and behavior as representative of the Company shows no understanding of how the business of such a corporation was actually conducted. At one point he even delivers an earnest ‘civilizing mission’ monologue in private, a laughable sentiment coming from a businessman shown to be well aware his only goal is extracting as much money as possible from North America.

Frontier may ultimately be a mess, but that is not to say there are no enjoyable moments. Mamoa is always charismatic on-screen, and the pulpy story is entertaining for what it is. A historical treasure it is not, but if you’re looking for something to scratch a furs-and-flintlocks itch, Frontier is certainly worth a try.