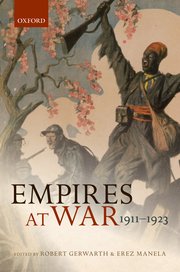 The Great War has come to be known as the First World War for rather obvious reasons. For four years it engulfed the globe in a conflict the magnitude and ferocity of which had never before been seen. This violence extended so far outside of Europe as a direct result of its key belligerents’ imperial holdings. Despite this, a preponderance of Great War history has focused on the infamous Western Front specifically and the war in Europe more generally. In this edited volume of articles, Robert Gerwarth and Erez Manela have assembled an array of perspectives that attempt to realign that focus, casting our attention not only beyond the confines of Europe but outside of the standard periodization of the war years as well.

The format of Empires at War is a simple one. Each chapter is devoted to a different empire involved in the Great War, with Britain’s size and diversity earning it two separate chapters.  Each of these chapters, penned by different specialists, briefly outlines the activities of their respective empires during the war and, more importantly, the effects of those activities and the war in general on the empire’s own security, cohesiveness, stability, and in many cases eventual failure. Coverage of a more traditional military history of events is thus understandably scarce. In its place is the application of an analytical framework that attempts to examine the war as an agent that acted upon empires, with results as varied as the histories and compositions of those empires. In doing so, the authors and editors also seek to demonstrate that the instigations and legacies of the Great War began earlier and lasted longer than the formal war years of 1914-1918.

Empires at War’s approach is refreshingly novel, offering largely persuasive arguments about the behavior of its respective empires. Indeed, one of my disappointments with the volume lies with its failure to apply that approach to one notably absent empire. Consistent with its theme of broadening horizons is Empires at War’s inclusion of chapters discussing lesser-known belligerents such as Portugal, Japan, and China, as well as a masterful treatment of the United States as just as much of an empire as any other Great Power. Missing is Belgium, one of the most central nations in the history of the Great War. I can’t but mourn the lost opportunity to examine a European nation with a sizable African empire that was itself largely overrun for the duration of the war. A much more pressing flaw is the deficiency of the editors’ stated chronological re-framing of the war. To highlight the chain of events following the war is admirable, but it is hard to see how various imperial campaigns (outside of the Balkans) in the years immediately preceding the war can be categorized as part of the same period of conflict without then including all imperial violence of the prior four centuries. This belies a more general problem with re-examining the chronological boundaries of a formal war, namely that all periodization in history is ultimately arbitrary, and opting to eliminate concrete boundaries can easily lead to the entirety of history being included in your new era.

These pitfalls are fortunately minor, however, and Empires at War serves as an admirable survey of not only the Great War outside of Europe but also the ways in which disparate empires responded to a shared existential threat. The result is to some extent a grand thought experiment for imperial theory in practice, one well worth reading and one sure to inspire all manner of future contemplation.

Unfortunately I know relatively little about the great war that can’t be found in a highschool textbook, but is it possible that Belgium was left out precisely because it was occupied for most of the war? Admittedly this wouldn’t prevent France from being included in WWII histories but, maybe?

That’s certainly possible, or perhaps this circle of editors/contributors just couldn’t find a colleague with the appropriate specialization. For me, being overrun would actually make Belgium an even more interesting case. To what extent did the lack of governmental direction from the metropole influence events in the colonies? How were they ruled in the meantime? Did they mobilize for the Allies, or remain inert? Where did the profits go, as Belgium’s empire was held directly by the crown? Was there some progress towards decolonization, or did the colonizers repress even harder? Could have been a fascinating chapter.