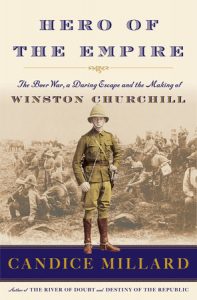 Millard, Candice. Hero of the Empire: The Boer War, A Daring Escape, and the Making of Winston Churchill. New York: Doubleday, 2016.

When I saw that Candice Millard, author of The River of Doubt and Destiny of the Republic, had published yet another book, I was intrigued. When I learned that this time her subject matter dealt with Winston Churchill and a British imperial war, I became excited. For those not familiar with her work, Millard has made a name for herself by engagingly telling the tales of lesser-known incidents in the lives of prominent historical figures, accompanied by a level of historical context that both lends depth to her narrative and helps emphasize the importance of the events she describes. Eager to see what might result when she took this approach to a topic I’m familiar with, I dove right in.

First and foremost, Millard is a masterful storyteller, and she could hardly have picked a more fascinating and daring episode in the life of that old bulldog, Winston Churchill. Intent on making his name in the turbulent political climate of Victorian Britain, Churchill had as a young man sought out war as his best opportunity for advancement through conspicuous valor. After two attempts to gain a medal during conflicts in India and the Sudan and losing his first Parliamentary election, Churchill gained credentials as a war correspondent in 1899 to cover the recently-commenced Second Boer War in South Africa between Britain and the inland republics of the cape’s original Boer settlers. Not content to remain behind with the command staff of the British relief forces sent to South Africa, Churchill found his way to the front lines and began to accompany soldiers on patrols into the countryside. On one such patrol, riding in a makeshift armored train, Churchill’s party came under attack. After a running battle in which Churchill, reputedly a non-combatant, took the lead in organizing efforts at escape, he was ultimately captured and held in a prisoner of war camp in the Boer capital of Pretoria. After colluding with two fellow prisoners to escape, Churchill inadvertently escaped alone and was miraculously able to evade capture on his nearly-three-hundred-mile trek to freedom. Returning to British lines a national hero, Churchill capitalized on the resultant wave of fame to successfully start his storied career in Parliament by winning his second attempt at election to the House of Commons.

Millard relates this nigh-fantastical series of events with elegant, poignant prose. She does not simply fill in the reactions and emotions of her subjects; rather, she artfully uses the vast corpus of documents written by Churchill throughout his life to fill in and project his remembered state of mind into her story. A story it remains, however, real as it may be. Despite the wealth of information she includes, Millard’s work is designed to tell her story first and to inform second, as a storytelling device. Her previous books, particularly Destiny of the Republic, were able to hit upon fairly well-defined and limited themes that allowed them to transcend their stories and become almost microcosms of the times portrayed therein. Hero of the Empire unfortunately cannot reach those same heights, as the breadth of the nineteenth-century British Empire cannot be so succinctly told. Certain topics and historical actors benefit from quite detailed discussion, while other subjects arguably closer in relevance to Millard’s core narrative are left unexplored. Still others, like the Boer War itself, are covered adequately in Millard’s leisurely rising action, but are then concluded hastily and with little further information once Churchill’s escape has proven successful. Once the reader recognizes this selective mindset, some of Millard’s other choices seem odd in their inclusion. In what I can only guess was an (unnecessary) attempt at lending further relevance to her story, Millard devotes whole pages to the actions of Mohandas Gandhi and other indigenous reformers during and after the war, topics completely unrelated to Churchill’s story save for their shared setting. The epilogue even goes so far as to treat the reader to a crash course in the last century of South African history, as if the development of that country was Millard’s focus all along. Despite presenting confusing choices at times, none of Millard’s history is wrong per se but simply uneven in its attentions.

The most perplexing element of Hero of the Empire may not be the information itself but the manner in which Millard relates it. In setting the scene for her story, Millard sets up the British and the Boers as both protagonist and antagonist, with predictably puzzling results. The rugged, independent Boers are repeatedly described in ways that approach a direct comparison to the American Revolutionaries of 1776, but their horrific racism and immediate role as Churchill’s captors sour the picture somewhat (though not as conclusively as I might like). The British Empire is characterized as stereotypically arrogant and humane only in relation to other empires, but is the nation of the hero for which the book is named. Churchill himself is treated to one of the better, or at least more honest, portrayals I’ve ever come across. Though he is the titular character and is something of an historical demigod in the modern era, Millard writes his trademark bluntness and confidence in his own greatness in such a way that the reader can’t help but realize how colossally insufferable he must have been in person, particularly before anything great had actually happened to him yet. The result of this atmospheric milieu isn’t so much an accurate picture of history’s nuance as it is a reluctance to come down too harshly on any one side or character, yet this may prove to be a positive. A reader sees in Hero of the Empire whatever the reader wants to see, and while that may not be a historian’s ideal approach, it is certainly the mark of a good storyteller.

One reply on “Churchill Begins: Candice Millard’s Hero of the Empire”

Agreed with all of the above. Will give her credit for doing extensive groundwork, including archival research and meeting with several different descendants of the folks involved. This research wasn’t used to connect to bigger themes, as you say, but it certainly puts her several ranks above armchair historians and demonstrates her commitment to doing whatever she could to tell a good story. Just wish she had dealt with race, imperial power dynamics more like how she tied together political, medical, and technological history in Destiny.