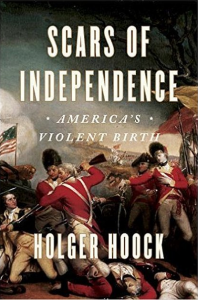 As some of you may have noticed in my recent post on American empire, I’m not exactly a fan of the exceptionalist myths that we Americans replace our history with. I became excited, then, when I learned about a new book from the J. Carroll Amundsen Professor of British History at the University of Pittsburgh, Dr. Holger Hoock. Entitled Scars of Independence, Hoock’s work is meant for both public and academic audiences and seeks to restore the central and ubiquitous position of violence to our sanitized and whitewashed tradition of the American Revolution. Reminding his readers that the war was just as much a civil war between Patriots and Loyalists as it was a struggle for independence, Hoock embarks on a grisly account of just how bitterly the Revolutionary War was waged.

Scars of Independence is, as Hoock writes in his introduction, a history organized around “violence as its central analytical and narrative focus.” This is a bold and ambitious stance to pursue, as violence is such a fundamental, broad, and pervasive function in human history that it cannot help but draw in all manner of additional criteria and subject matter. As a result, Scars of Independence can at times seem like multiple books crammed into one. A treatise on the violent persecution and repression of Loyalists at the hand of Patriots before, during, and after the war; an account of the lesser known Continental Army campaign in Iroquoia in 1779; an analysis of decisions to formally and informally wage hard war and their impact on attitudes towards the conflict; an exposè on the horrid conditions suffered by prisoners of war; an appraisal of underlying racial tensions and their implications for black people as both agents and acted-upon; all these thematic episodes merge and split across a backdrop of a (very) general chronological treatment of the American Revolution, with varying degrees of success.

Scars of Independence really shines when it deals with those groups marginalized and actively excised from the official narrative of America’s independence. First and foremost of these is the Loyalists, those elements of the colonial population who remained loyal to Great Britain and, in many cases, actively fought against their rebellious countrymen. Before the war, Loyalists were terrorized physically and psychologically by patriotic assemblies given official authority to enforce boycotts as well as unofficial mobs stirred up by local circumstances. The war gave even more excuses for the repression of this anti-Revolutionary minority and increased incidences of legitimized or hastily justified killing. After Independence had been won, hundreds of thousands of exiled Loyalists were denied their property and even the ability to return home, in direct violation of the Treaty of Paris. Holding no sympathy for traitors to its own cause, the fledgling nation then erased the public memory of their very existence. A similarly erased narrative, that of the Iroquois, is also poignantly resurrected by Hoock, as the Continental Army’s attempt to ‘extirpate’ four of the five Iroquois nations through crop- and shelter-destruction is described in no uncertain terms as genocide. The racial realities of colonial America are also deftly interwoven throughout the text, frankly illuminating the practical (not moral) motivations behind Britain’s manumission and employment of slaves while retaining a sense of black peoples’ own limited ability to decide their fate.

Scars of Independence stumbles, however, in its treatment of the violence more central to the conduct of the Revolutionary War: prisoners of war and the use of brutality by opposing armies and militias. It is not that the information provided is mistaken or somehow less compelling than that discussed above; the ordeals of POWs both in North America and in England are chilling, as is the litany of indignities and atrocities inflicted on civilians and armed personnel by both sides. Rather, it is that these topics seem oddly one-sided in a manner that fits the framework of American mythmaking, if not the sanitized content. Significantly more attention is paid to British offences against Americans than the other way around, and lip service to the latter is only given after extensive descriptions of the former. A perfect example is that of prisoners of war: out of sixty pages on the topic, only seven are devoted to the experience of British and German prisoners, with no explanation given for the discrepancy. Compelling reasons may certainly exist for this topical iniquity, yet none are ever offered. Even Hoock’s relation of accounts can be somewhat doubtful. His analysis of hard war is as much one of propaganda as it is of violence, and the ability of Patriots and their Congress to spin British atrocities to their own public relations benefit is a major subtheme of the book. Save for a single occasion, however, Hoock consistently fails to critically analyse Patriot accounts for inaccuracies, embellishment, or fabrication, nor does he ever use the word propaganda to describe the topic. Instead, he dwells on Washington’s insistence on waging a moral war in a manner that seems to conflate intentions with practical implementation.

Further clouding Hoock’s treatment of hard war is a perplexingly patchwork effort at contextualizing his topic as he valiantly attempts to refrain from straying too far from his avowed violent focus. Hoock gives an admirable summary of how European codes of warfare sought to contain conflict and restrict violence to only certain ‘legitimate’ forms, and the reciprocal savagery that could result when those codes were broken is hauntingly illustrated during the later years of the war in the Southern theater. Yet the exception of internal rebellion from the restrictions of these civilized codes is never adequately explained, despite Hoock’s repeated use of the 1745 Scottish Rebellion and its suppression at the Battle of Culloden for immediate and personal contexts. Britain’s dilemma and justification for pursuing a more brutal war against its revolting subjects is thus never placed within the long framework it deserves. This framework would also lend a much-needed and surprisingly absent racial perspective to American protestations of imperial brutality. Conditions in overcrowded and under-provisioned prison ships were lamented with no contemporary recognition of their similarity to the Atlantic slave trade; Hoock barely mentions it in passing. As traitors and rebels against the crown, Patriots had no reason to expect treatment according to the codes of civilized conflict, yet their apparently earnest shock and outrage at not receiving it engendered not only a crisis of conscience in Britain but an outpouring of international (European) sympathy. No uprising of indigenous, non-white peoples for the next two centuries would do the same, even as British soldiers strapped captured Indian rebels to the mouths of cannons for execution.

In the end, Hoock offers no grand relevance or continuity for violence in the American Revolution, but that was admittedly not its intent. As a work of much-needed revision, however, Scars of Independence performs admirably, if imperfectly. I can only hope that Hoock’s riveting work might begin to chip away at the mountain of mythmaking and misconception that continues to cloud America’s relationship with its past.