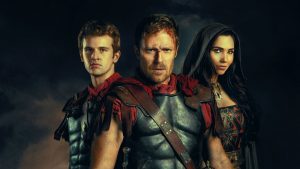 While we are officially historians of the modern era, faithful readers of this blog will know that both of us are part-time Classicists, and so it should come as no surprise that we welcomed a new season of Netflix’s docudrama series Roman Empire (previously thought to be only a miniseries) with open arms. The new season, subtitled Master of Rome, focuses on the life and exploits of the most famous Roman, one of the most famous people, to ever live: Julius Caesar. We must confess, we were both a bit disappointed by this. The decision to focus Roman Empire’s first season, Reign of Blood, on Commodus at least expanded upon a lesser known figure; Julius Caesar is in no need of such a treatment. Indeed, if you’re looking for an excellent dramatic adaptation of Caesar’s rise and fall, HBO’s Rome will scratch that itch all day. Unfortunately, our disappointment with Roman Empire’s second season did not end with its choice of subject matter.

One of the aspects of HBO’s Rome series that makes it so compelling is the attention the show’s producers paid to the material culture of the late Roman Republic. Watching HBO’s Rome makes it seem as if you, the viewer, are actually walking the streets of the city. Master of Rome, however, fails to get basic factual pieces of information about the material culture and military tactics of the late Republic correct. First, Julius Caesar and Rome’s soldiers in this documentary fight using weapons (and tactics) that are a mix of both early-Republic and late-Republic styles of combat. Julius Caesar lived after his uncle, the Roman general Marius, had instituted widespread reform throughout the Roman army. Marius’s changes to the army, in particular the way that legions were recruited, trained, and outfitted, led to a military structure where wealthy and powerful generals had the ability to recruit and maintain their own military formations. Thus, the common legionnaire, loyal to his commander, became a more important player on the battlefield while equites (mounted nobles) and hastatii (javelin-throwing foot soldiers) receded in both tactical and political importance. Master of Rome fails to differentiate between this change.

A more critical failure, however, is related to the docudrama’s failure to remotely model Roman battlefield tactics. Throughout the docudrama, Rome’s soldiers, and Caesar himself, are shown fighting small one-on-one duels in the midst of larger battles. Caesar saves individuals soldiers in melee combat and victory seems to go to the warrior with greater individual skills in close combat. This is completely inaccurate. By the time of the late Republic, Rome’s army was a highly disciplined, trained, and professional fighting force. Soldiers fought in formation and used repeatedly-drilled exercises to cut bloody swaths of conquest across the battlefields of the Mediterranean world. An oft-repeated adage states that the Roman legionnaire was told that “drills were battles without blood and battles were drills with blood.” While probably apocryphal, this phrase cuts to the heart of the matter: Rome’s soldiers were disciplined, fought in coordinated units, and never, ever broke ranks to fight one-on-one duels on a battlefield. The idea that Roman soldiers would leave the formations of their centuries to individually engage enemy combatants is ludicrous and shows a predilection for dramatic, gory fight scenes over an accurate portrayal of Caesar’s life in arms.

Lastly, this docudrama is not the place to find epic, Roman-era battles like the one that opens the epic movie Gladiator. Instead, the battles are portrayed as small actions between Caesar and his enemy who, conveniently, is leading his troops onto the battlefield in the exact same place as Caesar! The battles are sporadic and opaque events in the show, stepping stones to Caesar’s larger story, even though the show gives them a great deal of screen time. This leaves a murky picture of Caesar’s consequential engagements in the minds of the viewer, and, though a decision most likely made for budgetary rather than directorial reasons, leaves the show without a sense of consequence or suspense as Caesar engages Spartacus, Vercingetorix, and finally Pompey on the battlefield.

That larger story, too, is not exactly the most responsible or accurate narrative. From playing up Caesar’s military genius in early campaigns for which he is usually barely remembered as a participant, to portraying him as a reluctant mediator and hero, Master of Rome makes every effort to sensationalize Caesar’s life and portray him in an epic light. More mundane elements, like Caesar’s job as a tax farmer, are never mentioned, but even stranger are the sensational stories that are not included. Nowhere is the tale of Caesar getting captured by pirates; Caesar’s campaigns in Gaul never show his brief excursion to Britain. We watched, incredulous, as the epilogue went to absurd lengths to avoid any mention of Caesar’s nephew and adopted son Octavian, better known as Augustus.

For all this, we’re certainly not complaining if Netflix wants to keep doing seasons of docudramas on different Roman figures. Some public knowledge exposure is, for the most part, better than none. Given Master of Rome’s pathological avoidance of Octavian, it would seem that he would be the subject of a third season if it happens, but maybe afterwards Roman Empire can return to the potential we originally saw in it. There is certainly a laundry list of great Roman figures that deserve more attention: the Gracchi, Sulla, Vespasian, Diocletian, Constantine; the list goes on. Maybe someday, they can get the treatment they deserve.

5 replies on “Cracks in the Marble: Netflix’s Roman Empire: Master of Rome”

One question – the tactics the Netflix doc tells us beat Pompeii at Pharsalus was the ‘pivoting’ reserve troops at the back… as if the fact they pivoted could beat a cavalry charge from both sides (?). Can you help expand on this? They just seemed to leave it hanging, like many other battlefield related elements of the series. 🙁

Great point, Chris! There’s a double explanation for this one.

First, as the stirrup wouldn’t be invented for approximately another millennium (give or take a couple hundred years), Roman cavalry would have been what we consider “light” cavalry. Their main role would have been to take troops in the flank or rear, and would have been most useful in hounding the enemy during a rout. They were not heavy shock cavalry, and would not have been much use charging into the face of a prepared formation (especially since horses will not charge into a solid mass, contrary to what Hollywood has shown us).

Second, enhancing the first explanation in this particular instance, Caesar’s reserve fourth line were instructed to use their throwing javelins as makeshift spears, transforming them into a particularly tough nut to crack for a cavalry charge.

Thank you – really insightful! Keep up the good work 🙂

While all these observations in the article and comments are true, and I appreciate the points about the non-representation of Roman army formation fighting, I don’t think they even begin to touch on how wildly and fundamentally inaccurate this horrible show is! The very first episode of “Master of Rome” has Julius Caesar campaigning in Marcus Crassus’ army to quell the Spartacus rebellion!! Caesar was never even present in those campaigns, much less did he as depicted “save the day” by suggesting a tactical offensive in the midst of failure to turn the tide and defeat Spartacus! Also throughout the episode, “Master of Rome” not only fails to describe how there were historically and deliberately two consuls at the head of the Republic in order to check each other, this show in fact explicitly indicates repeatedly that there was only ONE all-powerful Consul, with Caesar, Crassus and Pompey all vying for that single coveted position! Poor co-consul Biblius is never even mentioned… Repeated emphasis is made as to how the Republic was “on the verge of civil war” as these three men maneuvered for Consul which is absolutely untrue – it even showed Pompey’s and Crassus’s armies assemble within Rome during the consular election where Caesar was elected THE Consul. In reality it was highly controversial and illegal at that time for such legionary troops to be anywhere around Rome, much less lining the streets outside the Senate building during an election! This is all farcical – any threat of “civil war” only came about much later, when CO-consul Julius Caesar returned from Gaul with his forces and brought them south across the Rubicon river towards Rome… and all of this fantasy occurring within the very first 45 minute episode.

I mean, if this show had been some sort of overt wild fiction loosely set in this time period I might be more forgiving, but the “Roman Empire: Master of Rome” emphatically tries to pass itself off as an historically-accurate documentary drama, complete with interspersed narrative commentary from contemporary historians and scholars who, judging by their supposed academic titles, should flipping know better than the utter tripe they are blathering on about in their learned British accents.

I agree that the inaccuracies are so wild as to be enraging, but the scholars have little to do with it. If you listen closely to what they say, it has very little to do with the onscreen events. Consider for example he letter Caesar sends to his wife from the servile war – it is cut by a historian saying that Caesar seems to have been devoted to his wife. The context makes it seem like the historian is endorsing the whole tale, but actually his sentence has nothing to do with what we are shown, as it makes no reference to Caesar’s supposed fighting alongside Crassus, his letter or anything that’s been presented. I think you have to be very carefully listen to the scholars and try to forget the editing and the context into which their words are planted. And yes, unbelievably annoying!