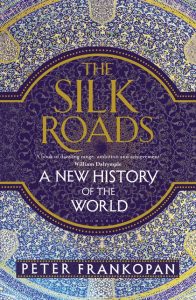 Frankopan, Peter. The Silk Roads: A New History of the World. New York: Alfred A. Knopf, 2016.

From its main title, one could be forgiven for assuming this book to be simply a regional study of Central Asia. Yet Peter Frankopan’s The Silk Roads: A New History of the World begins with much loftier goals. Having been fascinated with the history of the broadly-defined Middle East in his youth, Frankopan asserts that he is here to posit a new method of understanding history: one that challenges European narratives of inevitable triumph and restores Central Asia to its place as the fulcrum of world history. In the process, however, The Silk Roads delivers simultaneously more and much, much less than Frankopan promises.

Frankopan’s history is above all else one of trade. Using the pre-modern land routes that passed from China through Central Asia and on to the Mediterranean as inspiration, Frankopan uses ‘Silk Roads’ as an umbrella term to refer to all such connections between East and West that snaked through that region of the world. Indeed, Frankopan is at his best during the first half of his work as he deftly interweaves the goods, ideas, technologies, diseases, and peoples that were conveyed by these connections with the more well-known stories of empires, caliphates, and the ebb and flow of religions across the Middle East. While eminently readable, it is odd to hear this style of non-Eurocentric narrative described as somehow cutting edge for something published in 2016, as it has been taught in some American grade schools for at least a decade.

As the modern era approaches, however, Frankopan is inexorably drawn to the rapidly-diverging Europe. Entire chapters pivot towards Europe and the establishment of its overseas empires as Frankopan appears to embark on the global element of his ‘new history of the world.’ The Middle East never entirely disappears from the text, as the incentive of eastern trade inspires European expansion, but as new maritime routes draw the narrative more fully back to Central Asia, all pretense of avoiding Eurocentrism is lost. While Asian nations are not deprived of agency per se, European powers and Britain above all take center stage in their actions and influence throughout the region.

The second half of The Silk Roads thus sees itself guided by new themes cloaked as a continuation of the old. Tangents lurk everywhere, as does an inflated sense of its own arguments’ importance. One wonders why an entire chapter is devoted to Hitler’s Lebensraum policies in Russia and their impact on the Holocaust (it was apparently all about the grain) when the area concerned is only part of the Middle East by the most convenient of definitions. Russian and British rivalry over influence in Central Asia and particularly Iran becomes the single largest factor in igniting the First World War, while other factors such as souring relations between Britain and Germany have been “overstated.” Indeed, from the turn of the twentieth century onward, Frankopan’s eye is fixed on Iran, devoting over a fifth of his entire work to British and then American oil interests in the region and the efforts taken to secure them.

By the time it concludes, The Silk Roads has abandoned any aspirations it may have had to being a “New History of the World.” Africa is barely mentioned outside of a few paragraphs on the Atlantic slave trade, with China and East Asia scarcely more frequent. Outside the United States, the Americas are virtually invisible, while Oceania is completely so. Instead, Frankopan eloquently and persuasively establishes the American wars in Iraq and Afghanistan as simply a continuation of Western interest in controlling Central Asia’s abundant mineral reserves. This admirable achievement is unfortunately hamstrung by inadequate initial framing and Frankopan’s inability to realize that the region’s importance due to oil has little relation to its importance as the ‘crossroads of the world’ beyond happy coincidence.

Though Frankopan fails at delivering his new history of the world, he succeeds where connective history is at its most valuable. Decisions and motivations half a world apart are seen to profoundly influence each other as historical inspiration is derived from a burgeoning global world. Though still highly Eurocentrist, if Frankopan’s goal was to end the isolation of European historical narrative and show that Europe’s foil and civilizational catalyst has always lain in the east, he succeeds spectacularly.