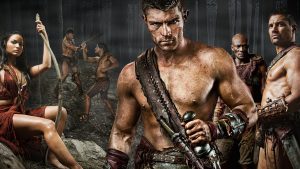 This show has been on my watch list for years. Ironically, it was originally recommended to me by my brother (I’m usually the one mentioning historical shows he might like). I had heard other rumblings and knew something of its reputation since, but only recently, when I saw that it had made it onto Netflix, did I finally get around to checking it out. Spartacus both delivered on everything I had heard and surprised me with its gratifying attention to historical detail.

First, a word of warning: Spartacus is not for the faint of heart. As mentioned in the title of this piece, Spartacus aired on Starz, one of the three premium channels (with HBO and Showtime) that have in part led the recent surge in prestige TV, often accompanied by their own brand of more gritty, explicit visual storytelling. Spartacus is the pinnacle of this style, though perhaps pinnacle might not be the right word. Where Game of Thrones or Black Sails used their violence and nudity for certain shock factors or occasional flavoring, Spartacus many times feels like the show is simply a vehicle for uber-violence and graphic nudity to be shown on screen (not to mention the saturation of highly explicit swearing). The action scenes are brutal, with approaching-comical amounts of blood, and even tracking shots of arena crowds apparently needed to include women falling out of their clothes.

If you can make it past the packaging, however, Spartacus offers students of Roman history a surprisingly rich visual tapestry of the years immediately preceding the fall of the Roman Republic. The show spans four seasons (subtitled Blood and Sand, Gods of the Arena, Vengeance, and War of the Damned, respectively) and tells the story of a Thracian who fights for the Roman auxiliary in northern Greece and, after leading a mutiny against his self-serving commander, is enslaved and separated from his wife. After training in the city of Capua as a gladiator, and experiencing many more personal betrayals and tragedies, the newly-christened Spartacus leads a bloody uprising that rampages across Italy before finally being crushed by the men who would ultimately become Rome’s first Triumvirate: Pompeius Magnus, Marcus Crassus, and Julius Caesar. Liberties of course are taken with what we know of the historical Spartacus, but it generally follows our sources accurately. The show’s material culture and costuming are excellent, especially on its Roman soldiers, and details of Roman procedure and engineering are followed admirably. Even the dialogue is head-and-shoulders above other such sword-and-sandals pieces. Care is taken to use Latin terms like ludus (a school for gladiators) or toga virilis (the first toga a Roman man would ever wear, donned at his coming of age ceremony), and the syntax even eliminates many articles in a way that seems to imitate the Latin the characters would have historically spoken.

Despite, or perhaps in part because of, this, I’ve seldom been so conflicted over a show as I am with Spartacus. Some have criticized Game of Thrones and other similar shows for exploiting women and unnecessarily showing certain levels of sexual violence; they would lose their minds over Spartacus, and with good reason. The level of rape depicted on screen, both coerced and violently perpetrated, in this show is shockingly high, not to mention all that is implied to have occurred off-screen. The women of Spartacus exist only to add depth to the men or act as sexually-promiscuous villains, and almost every plot point of the first three seasons is a result of the ‘man pain’ that results when a male character sees his love interest abused, abducted, or killed. As I watched, I decried this horrific exploitation, especially in a show that seems to be intended for fist-pumping young men not unlike the crowds in its gladiatorial arenas. Yet without detracting from the validity of these reservations, I couldn’t help but wonder if these elements were necessary to show this period in a manner approaching more complete historical accuracy. The story of Spartacus is a story that must necessarily deal with the horrors of ancient slavery compounded by the realities of an intensely patriarchal system that became more misogynistic the lower in society an individual was. If Starz had told this story without this brutality, would it simply be portraying a romanticized vision of the past, feeding into the myths that ancient, especially Roman, slavery was somehow much better than modern slavery, and that Rome was some kind of enlightened near-utopia? If the real value of visual media is helping us envision a world beyond the text of our sources, should not that depiction make us extremely uncomfortable with a world that was so much more brutal and different than our own?

In the end, I don’t have an answer to these questions, and thus I cannot feel comfortable actively recommending it to anyone. I simply lay the facts, and my interpretation, out for you to read and decide for yourself. If they leave you curious, I would welcome any and all discussion about this complicated, highly problematic show; if not, know that there exist many other highly deserving shows and movies that can scratch that ancient Roman itch in less objectionable fashion.