As the end of August 2021 approached, commercials began airing on a variety of networks for documentaries commemorating the twentieth anniversary of the 9/11 terror attacks. We were both in third grade that tragic fall morning in 2001, and so while we remember something of the events of the day and the responses it provoked, neither of us had really processed them as adults. We resolved to watch a couple of these documentaries and discuss them here on Concerning History, but before we knew it we had a queue of half a dozen 9/11-related films, miniseries, and specials to work through. What was originally intended to be a simple head-to-head comparative review has thus evolved into something of a guide to all this various programming, processed through the lens of our own analyses as historians and participants in this contemporary era of history. While it comes weeks after the anniversary, this has been by design: most of this material aired in the week leading up to September 11, 2021, but we wanted to give them room to breathe and really analyze them like we should, rather than write our reflections while still raw. 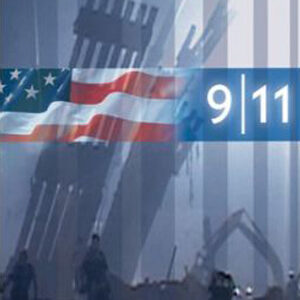 The first real documentary of 9/11 debuted in 2006, compiled from footage taken by two French brothers who had been embedded with the New York Fire Department to shoot a documentary on a trainee’s first year on the job. Fifteen years after the documentary’s original premier, CNN revisited this groundbreaking film, airing its original content with a supplemental “Where are they now?” special afterward. The footage captured by those brothers—one of whom was inside the North Tower of the World Trade Center from the initial NYFD response to escaping just before its collapse—is harrowing, but the tone of the documentary is very much of its time. Tied together by an oddly upbeat, even cheesy, narration supplied by one of the firefighters and accompanied by an actual soundtrack (which included a song lifted from Gladiator), 9/11 felt discordant to us, not really striking the tone one expects from a documentary covering this tragic day. That said, it’s not often that you get to see the history of the men who actually captured footage of such a seminal event, and for that alone it is at least worth checking out.

The first program we watched turned out to be by far our favorite of the bunch. 9/11: One Day in America is an uncompromising miniseries that tells the story of September 11 through the eyes of those who were there. There is not a single piece of modern narration or dialogue; the entire miniseries is related through interviews with living survivors (sans questions) and audio and visual recordings from the day itself, all set to a haunting, nerve-wracking score. The effect is something like that of the film Dunkirk or the miniseries Chernobyl, except so much worse: you’re watching a horror film, except it’s not a film, and you know what’s coming even as its participants do not. It is astonishing just how raw One Day in America gets for something that did not air on a premium streaming service, even including footage in which the crashing of bodies is loudly audible (and identified as such) as victims chose to jump from the towers of the World Trade Center rather than burn alive. While the majority of the series does focus on New York, it also gives due coverage to the other flights and events of the day. September 11, however, is precisely where One Day in America begins and ends. It is a riveting, shocking experience and ultimately a moving memorial, but the context for and geopolitical legacy of the attacks are never discussed. 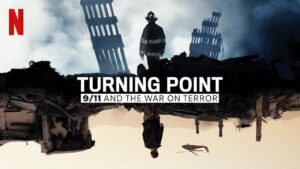 For those in search of context and legacy, look no further than Netflix’s Turning Point. The opening episode seems like a condensed, less emotionally taxing version of One Day in America…until it doesn’t. As soon as the title sequence concludes, this miniseries flashes back nearly two decades prior to the attacks, conducting viewers through the history of Islamic extremism in the Middle East in general and Afghanistan in particular. Subsequent episodes go in depth into American authorities efforts to trace the planning of the attacks, the wars in Afghanistan and Iraq, the Patriot Act and other new domestic policies, and ultimately the American withdrawal from Afghanistan less than a month ago. While it contains some memorial elements in its first few episodes, Turning Point treats 9/11 as a historical event and demonstrates through in-depth research and reporting how it has become a watershed moment for a very different world.

One of the many small details of 9/11 is that President Bush was not in Washington but in Florida that morning. He had planned on spending the entire day with a second-grade class that had vastly improved their reading scores under his No Child Left Behind initiative, but news of the attack arrived before even an hour with the students had passed. Bush addressed the nation briefly from the school, with members of the class visible in the shot, before then departing on Air Force One. This CNN Special Report reunites members of that class as young adults, interviewing them and their teacher about not only the day but how their lives have progressed since. It’s a fine hour of television, and lighter than much other 9/11 fare discussed here, but ultimately just a minor personal interest story. 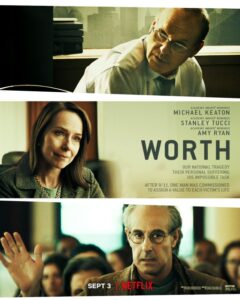 The only fictional account on this list, Worth follows the (real life) story of Kenneth Feinberg, the lawyer appointed Special Master of the September 11 Victims Compensation Fund by Congress only weeks after the disaster. Afraid that the relatives and dependants of the deceased would sue airlines en masse, leading to a plummeting, frozen economy, the government tasked Feinberg with signing these individuals on to one-time payments in return for agreeing not to pursue redress in court. Worth is a fascinating story of how we place value on people’s lives and a team of lawyers’ struggle to align the practices of their profession with the humanity this situation called for. We thought the choice to focus on Feinberg, rather than the individuals protesting the inhumanity of the early models of the settlements, was a strange one, but either way this movie is less a movie about 9/11 in particular and more a statement as to how our capitalistic legal system is not suited, and indeed in many cases is antagonistic, to these kinds of direct monetary support to those who need it most in times of crisis.

As a bonus, we also watched a CNN special hosted by Jake Tapper that attempted to make sense of America’s failure in Afghanistan and contextualize its disastrous withdrawal in August 2021. It is an impeccably researched and presented report, illustrating how each of three successive administrations mishandled the original battleground of America’s “War on Terror” such that, once the Biden administration took charge, the question was not whether a catastrophe would take place but just how bad it would be. That said, this special’s framing device—interviews with all the major generals who have been involved with Afghanistan—seemed to take precedence over a cohesive narrative of the war at times, and for our money, Netflix’s Turning Point actually told the same story better.

Going into this marathon, neither of us really knew what to expect. We worried whether what we would see would be hokey, overly patriotic or melancholy with too much navel gazing and not enough history, or overshadowed by recent controversies and partisan conflicts. The reality was a bit of everything. If asked for our own recommended syllabus of 9/11 media, as it were, we would wholeheartedly recommend watching National Geographic’s One Day in America followed by Netflix’s Turning Point. No series does a better job than One Day in America at imparting the horror and psychological impact of that day, which becomes even more important as recent generations with no personal memories of the day at all (including my students) come of age. Yet September 11, now two decades hence, must be considered equally as a tragedy and a historical reality, and Turning Point helps audiences understand not only why those attacks happened but how they resulted in the world we live in today. Those able to stomach both series’ material will find themselves better, more informed American citizens for it.