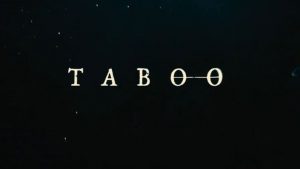 When I first got wind that Tom Hardy was working with FX and the BBC to produce a gritty television series involving the East India Company and the African slave trade, I was ecstatic. That show, named Taboo, concluded its first season in February after eight episodes, and despite it not being quite what I expected, I certainly enjoyed watching it.

Tom Hardy plays the main character, James Delaney, who has been presumed dead in Africa for twelve years by the time the show begins in 1814. James returns to London upon the death of his merchant father to inherit the land of Nootka Sound, a key strategic point on the west coast of North America for trade with China. James’ father had come into possession of the land through a treaty with the local Native American tribe, an element of which resulted in his marriage to the woman who would become James’ mother. In the midst of a war and secret peace negotiations with the United States, the British Crown and the East India Company seek to deliver Nootka from private hands and into government control. James ends up playing all three factions against each other with the help of various illicit dealings and seedy compatriots in an effort to retain his land and sail to America to begin trading there. In the process, intrigue abounds as secrets are stirred up surrounding James’ family, his incestuous relationship with his half-sister, and the circumstances of his ‘death’ in Africa.

Taboo has very few sympathetic characters and no heroes, a narrative choice reflected in and emphasized by its historical setting. The mud, blood, and refuse of London and its dockyards are omnipresent throughout the series, while the costume and makeup of its characters are simultaneously gorgeous and unsettlingly grimy (in a good way). All this adds up to a series that feels tangibly, grittily real in a way few historical series manage. While I can’t speak to more minute considerations of material culture, I can attest that never before have I seen the Company portrayed so well in its pragmatic bureaucracy, and I was constantly giddy to be watching a show on TV in which characters were casually referring to “The Honorable East India.”

Only two critiques of an historical nature sprang to mind as I watched. The first was relatively minor and somewhat unavoidable. In a time when the British Empire spanned so much of the world and was embroiled in so many conflicts, Taboo’s story at times can seem a bit too focused. No other events intrude in the sanctity of the plot, and while this is understandable from a narrative point of view, the given impression that this relatively minor territorial dispute is the only matter occupying both the Crown and the EIC’s full attention can occasionally inspire skepticism. My second critique is a predictable one if you’ve read any other reviews of Taboo. James Delaney, a role Hardy and his father wrote for himself, is supposed to be of mixed heritage (Native American and English). In terms of his own heritage, however, Hardy is thoroughly white, and so his design and self-casting of this role is dubiously believable, to say the least. This is an admittedly large obstacle to historical veracity, but if you can somehow look past it, spending hours in such a stunningly-realized Georgian London is well worth giving Taboo a try.

One reply on “Mud, Blood, and Grunting: FX’s Taboo, Season 1”

I actually enjoyed this show. I may not be educated much with history but it took me back to that time. At times I did have a hard time following, again because of my education. Makes me wonder what it was really like back then and did certain stuff like this really go on with government and business. Nice blog Bryan.