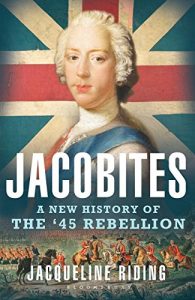 At some point in their high school European History course, American students are inevitably taught the series of events set in motion by the English Civil War. Culminating in the Glorious Revolution and the signing of the English Bill of Rights, these events are presented as pillars of shared Anglo-Saxon principles of liberty and jurisprudence before the course moves on to other things. Rarely covered is the fallout from that revolution, which would span seventy years and three open conflicts within the now-British state. I myself only learned of these risings through my undergraduate coursework and, realizing I still had never delved into the exact history of the most prominent of them, that of 1745 (or “the ‘45”), I sought to rectify the situation. The book that came to hand was Jacqueline Riding’s Jacobites, and while I could not have asked for better, it was certainly not without its trials.

If the devil is in the details, Jacobites requires an exorcism. Riding’s narrative of the course of the ‘45 is masterfully thorough, such that a reader completely unfamiliar with even the mention of it can follow along with little confusion. In 1688, the aforementioned Glorious Revolution had ousted the Catholic James II/VII from the thrones of England and Scotland in favor of the Protestant monarchs William and Mary. Though James would die in exile, his son (also James) would continue to hold court, first in France and then in Rome, as the (perceived) rightful king of England and Scotland, all while dreaming of taking back his kingdoms. An extensive network of sympathizers and supporters in Britain (known as ‘Jacobites’ after the Latin for James, Jacobus) enabled two attempts towards that goal, in 1715 and 1719, but both floundered and were suppressed. While the Stuart line languished on the continent, William and Mary’s daughter Anne had officially united the kingdoms, and now the line of Hanover ruled Great Britain.

The year 1745 found James Stuart’s eldest son Charles, restless and eager to pursue his father’s claim, seeking French support for yet another incursion across the English Channel. Not to be disheartened by his lukewarm reception at the French court, Charles endeavored to land in Britain alone, making for Scotland and trusting that the traditionally strong Jacobite sentiments in the Stuarts’ ancestral homeland would compel its inhabitants to rise up against the ‘Usurper,’ George II. Though all parties attempted to dissuade him from this rash course, Charles persisted, not only gathering thousands of Highland clansman to his banner but capturing Edinburgh and soundly defeating a British army in the process at Prestonpans. Convinced of widespread popular support not only in Scotland but in England as well, Charles insisted on advancing south towards London, confident his ranks would swell and sweep all before them. It had been twenty-six years since the last rising, however, and much had changed. The Jacobite army found little support in England, and were forced to withdraw back to Scotland after reaching the town of Derby, only 120 miles from London. Outmaneuvered by two separate British forces, Charles’ army nevertheless won a second battle at Falkirk before ultimately meeting its annihilation on the field of Culloden at the hands of the Duke of Cumberland, then just twenty-four years old. Charles’ supporters would be tried and brutally executed, while the ‘Pretender’ himself would escape back to France only after eight months evading capture through the Highlands and Western Isles. The last and greatest Jacobite rising was over, leaving in its wake a firmly united kingdom.

Though the details of Riding’s meticulous account are its strength, they also comprise its greatest weaknesses. The sheer weight of information contained within Jacobites’ pages can be daunting, and does not make for ease of reading. Whole sentences exist solely to list the names and titles of Scottish lords or to describe Prince Charles’ appearance for the dozenth time, and while Riding’s extensive use of primary sources in the text is historically admirable, eighteenth-century letters are not exactly known for their effortless prose. Much of this detail comes in the form of intricate descriptions of towns, cities, and the geography of the campaigns, leading one to wonder whether it might have served Riding better to include a series of annotated maps rather than a litany of only-slightly-relevant portraits before every chapter. Any details not immediately concerning the ‘45, however, are noticeably absent. Britain and France are at war for the duration of the rising, but the larger context of that war, its inciting incident, even its name (War of the Austrian Succession) are never mentioned as such. Similarly, no discussion of historiography is to be found in Riding’s narrative. Her subtitle claims that Jacobites is a “new” history of the rebellion, but it’s not clear whether this is meant in any but the most literal sense. Traditional analysis of the ‘45 holds that it failed due to a lack of support from lowland Scots, who had found increased prosperity under the new union of Scotland and England. Riding mentions this topic only once, yet never explicitly offers a counterargument. Was the problem really a lack of English support? Was the lack of French invasion the deciding factor? Could incompetent generalship and infighting among Jacobite forces be to blame? Or could Charles’ own insistence on the outdated tenets of absolute monarchy and cult of personality have sabotaged his gains? All these themes are developed throughout Jacobites in their turn, but never do they rise to become a driving argument. In fact, save for a few minor episodes and anecdotes, Riding’s work is markedly free from any analysis at all

In the end, Jacobites may be akin to effective yet unpalatable medicine. It will certainly cure any dearth of knowledge concerning Charles Stuart’s attempt to regain his father’s throne, if only you can manage to choke it down. While I was able to enjoy it without undue difficulty, I cannot in good conscience recommend it to any but the most devoted students of British or military history.

I would have been lucky to get a European history class at my high school, let alone one that covered early modern Britain in enough detail to mention Williamites or Jacobites! But thanks for the sound, honest review of the book–I’ve struggled also to find a good overview of the ’45–its good to know that this might offer the facts, but maybe not the best choice for readability. Always enjoy your book reviews though.

Good point about high-school history classes; I didn’t learn about the Jacobites until I read Outlander (which, though fictional, is a very well-researched series). I found myself frustrated with my lack of knowledge in ‘modern’ British history in my recent trip to England where I was frequently grasping at straws in order to relate what little I knew about their historical monarchs to what I was seeing/hearing.