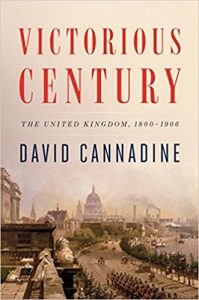 David Cannadine has loomed large in my own relationship with the British Empire. His response to Edward Said’s Orientalism, Ornamentalism, was one of the very first books that pointed me on the path to becoming a global historian, and I was lucky enough to write a (highly critical) paper on it years later at Oxford. When I saw that he had authored a general history of Great Britain in the nineteenth century as part of the Penguin History of Britain series, I knew I needed to read it.

Most students of history are probably familiar with the idea of a ‘long nineteenth century’ in European history, extending form the French Revolution in 1789 to the outbreak of the First World War. Cannadine takes a different approach, beginning with the Act of Union that officially enfolded Ireland into the United Kingdom and ending with the landslide Liberal victory in the general election of 1906. Through these 106 years, Cannadine traces the threads of Britain’s political, cultural, social, technological, and imperial development from a beleaguered early modern nation at war with Napoleon to the pre-eminent world power, teetering on the precipice of irrelevance.

Victorious Century is first and foremost a political history, and fittingly it is in his political narrative that Cannadine excels. Parliamentary politics in the 1800s can be as boring as they were important for internal British history, yet Cannadine deftly navigates them, clearly explaining the difference between and evolution of the Tory, Whig, Liberal, and Conservative parties and their policies. The great issues of reform, Corn Laws, and Irish Home Rule receive their time in the sun without boring the reader to death, and Cannadine’s general yet thorough coverage of Britain’s imperial history is admirably linked to the specific governance of successive administrations.

If anything suffers in Victorious Century, it is the social and cultural history of Britain. For a political and imperial historian, Cannadine does give admirable focus to these areas, but they are by and large covered from above. While he takes pains to illustrate how Britain changed throughout the century in such areas as population, life expectancy, social stratification, and industry (with its accompanying labor), all is done from a bird’s eye view, and at no point does the reader feel like they can imagine the streets of London or Edinburgh or Dublin recreated around them. Such oversights are the nature of any one-volume history of an entire century, however; authors must choose what to focus on, and what must regrettably fall by the wayside.

As a whole, however, I cannot recommend Victorious Century highly enough for those looking for an overview of British history in the period when Britain led the world in just about every way conceivable. At 500 pages, it may be slightly too long to be required reading in a course on the era, but if you have the time to work through it at your own pace, the results are well worth it.