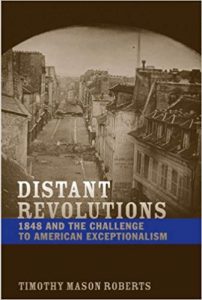 It is unwise, as the saying goes, to judge a book by its cover. More specifically, I have increasingly found that the titles and jacket descriptions of history books can be highly misleading as to the nature of the information—and arguments—within. Such was the case with Timothy Roberts’s Distant Revolutions. Heather and I recently acquired this book in an effort to learn more about its titular upheavals after mentioning it in our 2018 historical anniversaries post. I expected a refreshing dose of perspective to American ideas of our own exceptionalism; instead, I found a fascinating history of connections that crossed the Atlantic and bridged the upheavals of 1848 with that of 1861.

The year 1848 saw a wave of popular risings against the hard-won and hard-maintained post-Napoleonic order of Europe. Beginning with the overthrow of the French King Louis Philippe and the founding of the Second Republic, revolution would spread to Italy, the German states, and Hungary, resulting in a flowering of republican sentiment and, ultimately, its brutal suppression and betrayal of democratic principles. These events are not the subject of Distant Revolutions. A brief summary is of course provided for vital context, but Roberts’s real subject matter is the United States of America. Contrary to how most history courses—secondary or college—are conducted, American history in the ‘antebellum’ period did not take place in a vacuum. As the first modern republic established through revolution, America looked on the events of 1848 with keen interest, and Roberts dissects every aspect of contemporary Americans’ reactions and political opinions towards these distant revolutions. Initially excited for the spread of republicanism, Americans were soon shocked and dismayed by what they saw as shameful anarchy, violence, and socialism as opposed to their own revolution, which national myth-making had rendered devoid of bloodshed or upheaval. Simultaneously, the courage of 1848’s European revolutionaries inspired antislavery forces in the North to increasingly mobilize and stand firm in the face of encroaching Southern interests.

The strength of Distant Revolutions lies precisely in the trans-Atlantic connections it illuminates between American and European histories traditionally kept isolated. The course of Roberts’s analysis demonstrates how thoroughly these revolutions pervaded American cultural and political discourse for more than a decade: Uncle Tom’s Cabin makes explicit reference to them, the crisis of Bleeding Kansas was compared to the violence and lawlessness of 1848, and the immortal closing line of Lincoln’s Gettysburg Address was even likely inspired by the words of Italian revolutionary Giuseppe Mazzini.

Indeed, Roberts goes so far as to cast the American Civil War as the last of the 1848 Revolutions, not for any shared ideological basis, but for the role the legacies of 1848 played in radicalizing antislavery elements of society, alarming slavery’s defenders, and making both sides more willing to resort to violence. To many, these claims may seem a bit overblown; I certainly doubted them as I read them, yet the more I reflected on the isolation traditionally characteristic of this period of American history, the less certain I was of my objections. While the 1848 revolutions were not the only factor on the road to sectional violence, Roberts’s arguments certainly provide a compelling supplement that links those factors more smoothly.

While it did not provide the European history I expected, Distant Revolutions did enhance my own understanding of a period in American history I had originally thought fairly static and well defined. I highly recommend it to any student of nineteenth-century American history, and might even go so far as to say it should be required reading for anyone interested in the American Civil War.

One reply on “Ripples of Republicanism: Timothy Roberts’s Distant Revolutions”

Interestingly, my AP World class did identify the Civil War as part of a broader Age of Nationalism.