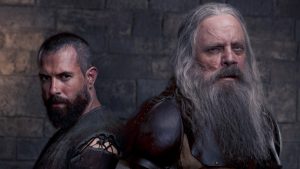 Last year, I was pleasantly surprised by History Channel’s newest scripted history content, Knightfall, and its decision to steer into the motifs of a grail quest that we know, somehow, will lead to the fall of Knights Templar in the early fourteenth century. A little over a year later, its second season premiered to much fanfare, centered almost entirely around the fact that the always wonderful Mark Hamil would be joining the cast as a crotchety old Templar veteran tasked with training the Temple’s new initiates (sound slightly like a recent Star Wars movie, anyone?). Eager to hear more of the mysteries of the Holy Grail and see how, exactly, the tragic flaws of main character Landry de Luson lead to his order’s destruction, I dutifully tuned in.

As far as story consistency or plot threads go, the second season of Knightfall proved somewhat of a disappointment. The season begins with Landry hiding his baby daughter in the aftermath of the first season’s showdown with King Philip of France, the murder of the pregnant Queen Joan in retribution for her affair with Landry, and the last minute operation to save her child. Landry and his brother knight Tancrede provide for the child before returning to the Chartres Temple for Landry to repent of his sins. Templar Grandmaster Jacque de Molay reluctantly allows Landry back into the order, but strips him of his rank, making him an initiate once more. Here is where Mark Hamil’s Talus comes in, re-instilling the values of the Poor Fellow Soldiers of Christ in Landry.

Gone is the plot point that seemed to indicate the real Holy Grail is the bloodline of Christ and that Landry might be the latest scion of that family. Gone, indeed, is any mention of the Grail. Instead, this season of Knightfall is ultimately a bit of a counterfactual revenge fantasy. Yes, Philip of France gains control of the papacy and yes, the Knights Templar are framed for heresy and executed, but within these historical bounds, the show delivers certain fist pumping moments for those who wonder “What if?” What if the Templars staunchly defended their fortress at Chartres against the army of Philip? What if some knights escaped before the siege and attempted to rescue their comrades from the trials in Paris? What if Mark Hamil laughed maniacally, calling down the wrath of God on King Philip and his pet Pope as he attempted to assassinate the royal family with a concealed ballista?

All of these questions are answered with straight-laced camp in Knightfall’s second season, and those answers even leave room open for a third season. While I have no idea how this show plans on proceeding from here, as its title and premise have essentially been delivered on, I look forward to wherever this too-serious camp fest decides to go. Who knows? Maybe next Landry will meet up with William Wallace. I honestly wouldn’t be that surprised.