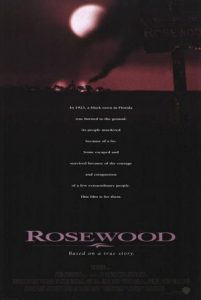 As the nation wrestles with last weekend’s implications for who we are as a country, I thought it might be appropriate to look back at a lesser-known movie from two decades ago.

John Singleton’s Rosewood is set during the 1920s in a small Florida town of the same name. If its plot were entirely invented, the film’s depiction of racial violence would still be representative of the worst atrocities of the Jim Crow Era, but the film is based on a true story. The Rosewood Massacre (1923) was all too real for the victims and survivors of the terror that destroyed their town.

In the film, Rosewood is a quiet and prosperous African American community in rural Florida. Its residents’ economic ties to the neighboring white community of Sumner ensure a state of coexistence, albeit one premised on deference to an unassailable racial hierarchy. After a white woman from Sumner falsely claims that she was sexually assaulted by a black man, millworkers form a posse with the intent to torture and kill their way through the black community until they find the offender. Just days before, a black veteran of the Great War named Mann (Ving Rhames) arrived in Rosewood looking to buy land and settle down. As news of the first lynchings spread, Mann departs to save his own neck (which bears scars from a previous encounter with a lynch mob). The locals are left to fend for themselves. Sylvester Carrier (Don Cheedle), a schoolteacher and community leader, refuses to be cowed and resolves to fight back.

All hell breaks loose as the posse completes its transformation from an extra-judicial mob to a terrorist band intent on punishing the African American community for its presumption to resist white supremacy. As it becomes clear that the situation has escalated, Mann returns to town to take the women and children to safety. He is aided by John Wright (Jon Voight), the white owner of Rosewood’s general store. But the filmmakers allow the audience no illusions that the character can be considered Rosewood’s benign white savior. Only after witnessing the murder of dozens of his neighbors does Wright agree to help survivors to escape.

Although the film begins much like any drama, its climax resembles more closely an action film than a tragedy. The effect is disorienting, rather like if Solomon Northup from 12 Years a Slave had shot his way to freedom. The final sequence is both jarring and cathartic, obviously out of place but still satisfying to the emotionally-ravaged audience.

The take on race and racism is mature and complex; the movie would not function otherwise. Each character has his or her own relationship with the construct of race that shapes their decision. The population of Rosewood disagrees with itself about how to respond to the threat of violence, arguing during a community meeting whether they should assert or subordinate themselves to protect their families. On the other side, the attitudes of the white posse depict how racism can span from mindless hatred to permissive indifference to racial injustice. Throughout the film, County Sheriff Bob Walker (Michael Rooker) strives to balance the violence of the posse with the rule of (white) law, but he cannot stem the tide of escalating bloodlust. The most violent member of the mob is less conflicted about murdering his black neighbors. A poor white alcoholic, he sees the destruction of Rosewood as a victory for white America—at least until his son rejects him over his actions. The boy’s decision reflects Nelson Mandela’s famous line that “No one is born hating another person. . . . People must learn to hate.” It’s a rare moment of hope in a disturbing film, a reminder that racial violence may be our history, but it does not have to be our destiny.

Most of the protagonists are based on real people and exhibit varying degrees of everyday heroism, but the fictitious character of Mann is a larger-than-life representation of black agency and resistance. On the one hand, he is a classic archetype: a war-weary veteran who rides into town on horseback and who bears heavy secrets and unspeakable sorrows. On the other, Mann is uniquely presented as a decorated black veteran of the Great War—not exactly the traditional Superman figure we’re used to seeing on screen. The character of Mann, treated as a second-class citizen by the country he fought for, serves to contrast and rebuke the cowardly violence of the lynch mob claiming to be defending the American way of life. Through his displays of personal courage, Mann demonstrates that there is no contradiction between being a loyal black citizen of the United States and fighting back against the rotten pillar of racism that the country stands upon.

As with any film, the transition from history to storytelling involves compromises. Discrepancies about the actual casualty figures presented at the end of the film make it difficult to interpret those deaths shown on screen. Official reports can confirm that 6 blacks and 2 whites died in the massacre, but survivors and descendants believe there were between 20 and 60. It is impossible to keep track of how many people die in the film, but it seems the filmmakers used the latter number either to credit the survivors’ accounts or to emphasize the horror to the audience. Even viewers accustomed to high body counts in Game of Thrones and similar shows may find that seeing so many black bodies suspended by nooses creates a sense of voyeuristic culpability, a sense that it is wrong just to watch such an atrocity recreated onscreen.

When the massacre was revisited by journalists in the 1980s, the State of Florida commissioned a report on the incident and ultimately issued reparations to survivors. I was surprised when I read the report to find that even some of the most unlikely scenes in the movie were inspired by oral testimony of survivors, including one depicting a mass grave containing no fewer than 28 bodies. The report also credits white hysteria over returning black veterans as a prelude to the violence, suggesting the historic rationale behind the invention of Mann’s character.

Rosewood is well worth watching, but only viewers with a strong stomach should try. The film offers a blend of history, family lore, and Hollywood storytelling to elevate the memory of one of Jim Crow America’s darkest moments. It gives lie to assertions that the Civil War ended in 1865 at Appomattox. If America is divided today, it is no more so than we have been for most of our history. Like in 1923, today’s hatred has always been among us, barely suppressed, ready to rear its ugly head at its first opportunity. Will we do better than the film’s John Wright? Will we stand up to that hatred now, or will we watch as innocents continue to die until our burdened consciences finally compel us to act?