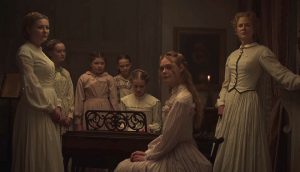 About a year ago, we watched, intrigued, as a new trailer for a romantic drama unfolded before us. An independent film with a star-studded cast, it promised suspense, betrayal, and revenge in a tale of jilted lovers and, even better, it was set during the American Civil War! That film was Sophia Coppola’s The Beguiled, and we couldn’t wait to check it out and bask in the melodrama, for good or for laughably bad. We were finally able to get our hands on it recently, and while it certainly wasn’t the most enriching film in terms of history, it’s story certainly didn’t disappoint.

Set in Virginia in 1864, The Beguiled focuses on a group of women and girls living at a finishing school that takes up the grounds of an old plantation. One day, while out gathering mushrooms, one of the girls discovers a wounded Union soldier and brings him back to the main house. Fully intending to turn the man over to a Confederate patrol, the headmistress of the school (Nicole Kidman) determines to at least tend his wounds before giving him up. Confronted with an unfamiliar man, and a living representative of a demonized enemy, no less, in their midst, the young women of the school find themselves developing relationships with this mysterious, beguiling stranger who could be either a kindly ally or a cunning viper.

As period pieces go, The Beguiled is fairly middle of the road. There are no great lessons or insights to be gained, and no historical events reimagined for a modern audience. The material culture and costuming are fine, and while they may not be the pinnacle of accuracy, there are no glaring errors or hilarious anachronisms. If you’re up on Civil War gender history and are interested in making some far-fetched connections, you could see reflections of Drew Gilpin Faust’s Mothers of Invention in the awkward relative helplessness of the women at the finishing school, and the value that they all place in the physical help their healing soldier can give them. There is a danger that any of these plantation-set pieces will fall too far into the moonlight-and-magnolias, Lost Cause mythology, and while there is an element of that inherent in the genre, The Beguiled does not go overboard, and any drama between the women and the soldier does not come from living out any predatory-Yankee tropes.

When all is said and done, perhaps the most objectionable element of The Beguiled is the elision of Nicole Kidman’s motives as she decides to continue hiding the Union soldier after his wounds have sufficiently healed. Indeed, we joked throughout the movie that the women seemed to keep him around for no other apparent reason than a yearning for, ahem, manflesh. This certainly cuts to the core of The Beguiled; its period setting is simply a vehicle for its drama, and while ‘Civil War buffs’ may not find much for their interests, those who enjoy Downton Abbey or other such quiet period pieces may very well find much to enjoy in The Beguiled.