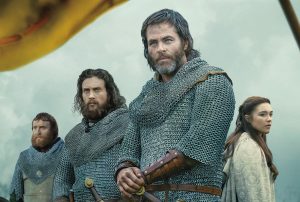 Billed alternately as a somewhat-sequel to the classic movie Braveheart and “the real story of Scottish independence that Braveheart didn’t tell you,” (the two aren’t mutually exclusive, by the way), Netflix’s new film featuring Chris Pine as the titular character, Robert the Bruce, has been on my radar for a while. Being somewhat familiar with this period of Scottish history, or at least, familiar enough to want to see the Bruce portrayed historically faithfully, I dove right in after it dropped on Netflix November 9. While I enjoyed Outlaw King well enough, one thing it most certainly is not is historically accurate.

Outlaw King traces the story of Robert the Bruce, heir (and ultimately lord) of the House of Bruce and King of Scotland as he fights to secure his country’s independence from England in the early fourteenth century. Having previously sworn allegiance to King Edward I and been reconciled after supporting the rebel William Wallace, the Bruce is at first reluctant to resist English occupation. He takes an English wife and dutifully, if unhappily, ensures his land’s taxes are paid. When Wallace is captured and brutally executed, however, Robert resolves to unite Scotland to oppose its conquerors. After being forced to murder his rival John Comyn to avoid exposure, the Bruce is crowned king and raises his banners. Ambushed during the night, however, his force is scattered and he himself is separated from his wife and daughter, compelled to flee for refuge to Scotland’s western isles. Soon, though, the Bruce and his loyal followers return, waging a guerrilla campaign and gathering strength before meeting the English army on the moors beneath Loudoun Hill to begin taking their country back.

As a movie, Outlaw King feels slightly rushed. It only runs two hours, and the film is evenly split between rising action and Bruce-in-exile. Beat for beat, it’s nearly indistinguishable from its Mel Gibson-featuring predecessor, though in one welcome difference the love interest is not brutally killed. That relationship itself, while endearing, also feels too convenient and isn’t given enough time to breathe and develop naturally before the Bruce and his wife are torn apart. So, too, does the Bruce’s exile and mustering proceed a tad too quickly for his victory to feel earned, and that victory is only the first, lesser-known battle that begins his fight, not the climax at Bannockburn. Perhaps an additional 15 minutes might have smoothed out some of the movie’s flow.

Extra time, however, could do nothing to fix Outlaw King’s mess of an historical narrative. In its efforts to somehow cover the Bruce’s entire arc from loyal English vassal to exiled rebel to victorious king, the movie conveniently compresses a long, complex series of events almost beyond recognition. Whereas here the Bruce loses his initial army due to a surprise night attack, in reality he lost two battles due to plain bad generalship (though allowing an entire English army to approach within bowshot of your camp is its own kind of bad generalship). Outlaw King also leaves out the destruction of the Bruce’s brothers’ army by McDougal forces loyal to the previous royal line of Baliol, though it tries to reference it with a McDougal attack on Robert’s band as they try to escape from the mainland. Finally, the English at Loudoun Hill were commanded by neither Edward I nor his son; Edward died 2 months after the battle, not on the march there, and the Bruce certainly never personally dueled the Prince of Wales to conclude the battle.

Outlaw King’s portrayal of this narrative, however, is gorgeous. Aside from tracking shots of the Scottish countryside that never fail to disappoint, the material culture, particularly arms and armor, are spot on, and the conduct of the battles is very true to how combat would have looked, replete with omni-present mud. The course of the Battle of Loudoun Hill itself is remarkably faithful to the sources we have, and unlike so many other movies, Outlaw King actually portrays the bone-numbing fatigue of the combatants by the end of the fighting.

In the end, Outlaw King isn’t quite the required watching I hoped it would be, and Braveheart may even be the more accurate film in the final accounting. But if you’re in the mood for some beautiful beards, thick Scottish accents, and chain mail, there are worse movies out there.