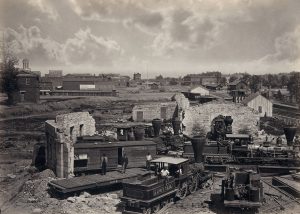 A few weeks ago, I was reading a chapter in an edited compilation (that will soon be reviewed here on Concerning History) when I came across an odd argument. As the author was introducing the concept of the United States as an overseas empire in the nineteenth and twentieth centuries, he noted the similarities between America’s own independence from Great Britain and that of the myriad recently-decolonized countries of Africa and Asia. Chief among these was a shared struggle for economic self-sufficiency apart from the mother empire, yet the metaphor was pursued still further to claim that the United States during its civil war in 1860s was a ‘failed state.’ I immediately disagreed, and sent Francis a message gauging his reaction. What follows was his (edited) response. — Bryan

Based on the experiences of South Vietnam and Syria, I would define a state as a failed state if these four conditions are met:

First, throughout the Civil War, the Union was able to provide for the safety and security of its citizens. While the states engaged in the rebellion were obviously affected by major displacements and catastrophes during the war, the people of these states democratically chose rebellion against the Union. This meant that military actions against them were in the interest of preserving the larger political entity, the United States of America, against an internal enemy that willed and actively coordinated its destruction.

Second, the Republican Party (and its anti-slavery platform) was not a political minority imposing its will on a majority. It was the fair constitutional winner of an election wherein its candidate won the plurality of votes and the majority of the electoral college. In other words, more people voted for Lincoln than any other candidate and, even though votes in favor of other candidates combined outnumbered his popular votes, those votes were not in favor of disunion. That was a separate issue decided upon by state delegations after the election was over. And, as the example of the War Democrats point out, failure to support Lincoln as a candidate for President did not equate to support for secession.

Third, the United States took no foreign aid during the Civil War. This is in contrast to Syria or South Vietnam. Syria has been propped up and supported by Russia to fight insurgents in its ongoing civil war while South Vietnam survived because the United States willed it to be a nation. Take away Russian support and Syria is alone in a world hostile to its actions. The withdrawal of U.S. troops from South Vietnam left South Vietnam without the strength to stop the North Vietnamese army and it was conquered in a matter of months. In contrast, what international pressures were applied during the American Civil War were directed against the Union. Rather than relying on outside nations to provide invaluable aid in terms of money and political clout, the United States managed to prosecute and win the war on its own.

Lastly, the United States did have economic problems during the Civil War, but not on the level of a depression or recession that caused an economic collapse. Wartime necessities sparked a boom in industry. Consequently, the West, Midwest, and North were able to recover from the economic hardships of the war and the nation’s GDP rose as a whole, even as inequalities increased with the height of the industrial revolution. A case can be made that the Union failed to address needs for economic stability in the South by failing to provide adequate supports for freedmen and poor white farmers seeking to rebuild in the aftermath of the war’s devastation. However, taken as a whole, the problems of the rural South did not bleed into the capitalist system of the nation’s economy as a whole. Americans moved west, industrialized, and diversified the nation’s burgeoning economy after the war, leaving an unreconstructed South behind. The poverty of the South does not mean that the United States is a failed state, only that it was a nation that struggled to rebuild at the end of its civil war.

Finally, a point should be made about the failure of U.S. democracy to adequately cope with the divisive issue of slavery to preserve the Republic from the problem of civil war. Where Britain was able to legislate its way to the end of slavery, the United States did not muster the political will to resolve this issue. Rather, pro-slavery forces perpetuated the institution. The Civil War, therefore, was not a failure of the Constitution or the Republic, but rather a failure on the part of the South to accept the constitutionally-mandated and accepted method for electing the president. This is not the failure of the state, but rather betrayal by citizens who valued their human property more than their nation. ​Due to the ability of the Union to shield its loyal citizens from the ravages of war throughout most of the Civil War, the fact that the Republican Party and Unionists were not a political minority, that the Union did not apply illegitimate or inhuman force against the South, did not rely on foreign aid (and persevered in spite of international pressures against it), and maintained the nation’s economic diversity and viability, the United States should not be considered a failed state during the Civil War.