It’s the second anniversary of Concerning History, and as we did last year, we wanted to taking a look at some of the major historical moments being commemorated this year and provide some recommendations for further reading! There are plenty of other events out there worth noting, however, so if you have one you think we should have included, we invite you to scroll down to the comments and share it with us.

2019 marks the 250th and 200th birthdays of four immensely important figures in European history. 1769 saw the birth of both Arthur Wellesley, Duke of Wellington, and his nemesis, Napoleon Bonaparte. These two titans would wage war against each other, both in proxy and finally, at Waterloo in 1814, in person. Their struggle, and that of their nations’, would shape the final decade of the eighteenth century and the first decade and a half of the nineteenth, with the peace settlement resulting from Wellesley’s victory setting the foundation for the next hundred years of European diplomacy.

Fifty years later, the monarchs that would reign over Britain’s ‘victorious century’ would be born. Queen Victoria and her consort, Prince Albert, would oversee the expansion of the second phase of the British Empire, Britain’s rise to global industrial primacy, and the ultimately doomed effort to cement lasting European peace through personal, familial, diplomacy amongst Europe’s monarchs.

1869: Completion of the First Transcontinental Railroad

Next month marks the 150th anniversary of the golden spike ceremoniously joining the Union Pacific and Central Pacific lines atop Promontory Summit in the Utah Territory. The completion of the nation’s first transcontinental railroad came at the conclusion of six long years of work joining the two coastal railroad networks of the United States. Driven by extensive political corruption, dreams of a unified continental empire, and a desire to bind the wounds of a divided nation, the project was only made possible by the blood, sweat, and more blood of many of the traditional American underclasses, including freedmen, Irish, and Chinese workers. While something of a pipe dream for White American industrialists, the iron road would usher in an empire of crop and cattle throughout the middle of the country. Perhaps most significantly, the road’s construction and use brought tensions between Americans and Plains Indians to a boil, furthering the genocide of the latter.

This spring also marks the 150th anniversary of the United States Supreme Court’s decision in Texas v. White. In the aftermath of secession in 1861, the Texas state legislature (newly loyal to the Confederacy) decided to sell the remaining U.S. bonds issued to the state as part of the Compromise of 1850. Following the war, Texas’ Reconstruction government tried to get these bonds back, arguing that they were illegally sold by the illegitimate secessionist Texas legislature. In a 5-3 decision, the United States Supreme Court under Chief Justice (and former Secretary of the Treasury under President Lincoln) Salmon P. Chase ruled that Texas had not legally seceded and the actions of the insurgent legislature were “absolutely null.” Despite popular majority-ratified secession ordinances and effective political and military independence, each of the Confederate states had remained states under the United States Constitution in the eyes of the law.

1919: End of the First World War (but not of violence in Europe)

We will be brief here, as we’ve all touched on this anniversary over that past few months, but we would be remiss if we didn’t mention that this June marks the 100th anniversary of the signing of the Treaty of Versailles and the official end of the Great War. Violence would continue, however, across eastern Europe and the Middle East well into the 1920s.

In his statement on the 10th anniversary of D-Day, President Eisenhower paid tribute not only to Americans, but to the soldiers of the British Commonwealth who together with American troops established a beachhead for the crusade against fascism in Europe, and the other Allies who contributed to that victory.

Eisenhower knew better than most the significance of international cooperation; indeed, its critical importance was one of the reasons he ran for the presidency. Having served as Supreme Allied Commander Allied Powers in Europe and as Supreme Allied Commander of NATO, Eisenhower understood that some challenges are too big to go alone, even if cooperation is sometimes a frustrating challenge in itself.

The common good is not served by showing suspicion to our allies or through the provocation of our rivals. As we stand on the brink of a new age of isolationism, Americans would do well to remember another anniversary, that of 80 years ago when Americans thought that the outbreak of war in September 1939 need not disrupt their lives.

Recommended Reading: Statement by the President on the 10th Anniversary of the Landing in Normandy, by Dwight D. Eisenhower 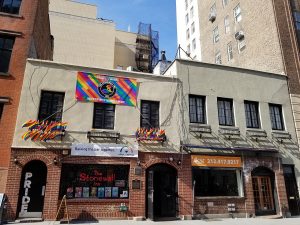 Designated a National Historic Landmark in 2016, The Stonewall Inn was in June 1969 the beating heart of New York City’s LGBT community. When a police raid on the nightclub in the early morning hours of June 27 turned violent, the resulting uproar gathered enough momentum to spark a full-blown uprising. The Stonewall Riots of 1969 would become one of the key catalysts of the American LGBT rights movement and their legacy is still remembered today through annual Pride parades held around the world each June.

We would be remiss not to mention the critical role that doubly-marginalized members of the LGBT community played at Stonewall. One witness present at the original raid estimates that at least 70% of the crowd at The Stonewall Inn on June 27 was Hispanic or black. Drag queens and trans women, too, were prominent at the club and in the protests that followed the raid. As we commemorate the 50th anniversary of the Stonewall Riots this summer, we must also consciously pay tribute to the contributions of these historical actors and the incredible change they brought.

Recommended Reading: Stonewall: The Riots that Sparked the Gay Revolution, by David Carter

As I wrote about last month, March 28 marked the 40th anniversary of the Three Mile Disaster. The incident was significant in many ways. Nationally, it forced a reconsideration of nuclear power and initiated began the slowdown of nuclear power growth. Locally, the trauma lingers, especially for the families who lived through that period of fear and uncertainty. The anniversary comes amid renewed debate about the future of the Pennsylvania nuclear industry and frames the debate over state support for the struggling industry.