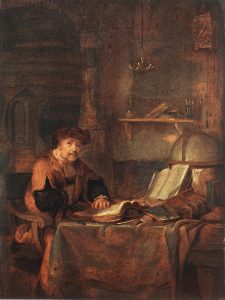 In my personal life and in my own musings, I’ve often referred to history as a series of stories, perhaps the greatest story in existence. This isn’t exactly a unique sentiment; Kevin even wrote a response to the worst excesses of this kind of thinking soon after launching Concerning History. How often, though, do you hear it the other way around?

Recently, I found myself reading an ode to the Star Wars franchise, a collection of one hundred moments from the saga and its associated media and why they instill a love of Star Wars in the author, internet personality and podcast host Ken Napzok. It was clear from early on that, while both Ken and I love Star Wars, we enjoy it in different ways, and nowhere else was this more clearly expressed than when I read the sentence “Canon should never get in the way of a good story.”

My eyes rolled so hard they popped right out of my head. You see, for me, ‘canon’ (in fiction writing, essentially what officially counts as the story and state of the world as it currently exists) is an inherent element of a good story. If a story ignores canon, it cannot be good. Simple as that. In a way, I realized, I was reading my fiction like an historian. From remembering details and studying narrative arcs to which series I prefer, it was all there. The more I reflected, the more examples I recalled, and I thought I’d share a few here to see if you recognize them yourself.

This isn’t just a history nerd thing, but it is overlooked with surprising regularity. Any fictional world worth its salt establishes rules. How does the magic work? The technology? The climate, the biology, the systems of faith? Only for convincing reasons can these rules be broken, and I would add the corollary point that unless explicitly addressed in previous rules, the basic laws of physics cannot be broken within the story either. Game of Thrones has been my repeated antagonist on this one. “You can’t just do THAT to a dragon! They’re fire made flesh!” I yelled at my computer a couple years ago. No spoilers, of course, but you can probably figure out what I was referring to. Or certain characters covering the same distance as others in half the time. Who would we be as historians if we just decided to elide certain inconvenient details of travel time or the positive identification of individuals? We would be medieval or ancient historians, but that’s another post.

Governments Need to be Believable

I am not the biggest fan of the new Star Wars movies (excepting the fabulous Rogue One). The reasons are many, but the biggest is one you probably haven’t heard: the astropolitics of this new galaxy make absolutely no sense. A government that spans thousands of planets (but does not control nearly all of known space) has a single small fleet of ships, which are stationed in its capital system. Its enemy amasses the resources to build a fleet capable of taking over the galaxy in mere hours AND hollow out a planet for a superweapon. . .without the other government being any the wiser. Bull. In fact, keeping things vague may be the better way to go. Call it a kingdom and leave it be; I’m cool with that. But start getting into representative politics without a sophisticated understanding of governance, and I’m coming with knives out.

Much like rules, every good fictional world has its own history, lore, mythology, religion. It is a world in full. Tolkien stands as the first and best model of this system, though many authors and even video games (seriously, go play Dragon Age) have come close to matching the Professor. That lore gives significance to the story, and makes it all the more fun to dig into its details, its nooks and crannies, just like we do when we study the history of our own world. Speaking of which…

Movements, states, people gain context and significance through what came before them and what comes after. They cannot be the same if they occurred in any different sequence. Like I wrote in my very first post on Concerning History, this is what makes history both thoroughly unpredictable, yet absolutely inevitable once it happens. Fiction is exactly the same, so when the popular video game series Shadow of Middle Earth launched its second game, in which it identified certain characters as living thousands of years after their time, I was done. Not interested. Thank you and goodnight.

These are just some anecdotes of my own foibles in consuming my beloved fictional tales. We all have our own, and I’m sure you all have some I’ve never even considered; share them here! The only thing more enjoyable than reading these stories is sharing them, and how we enjoy them, with others.

One reply on “Scholar of Many Worlds: Reading Fiction Like an Historian”

Great post. Maybe this is part of why I’ve always struggled to get into comic books. Have you read any of Brandon Sanderson’s books? I think you’d appreciate his Stormlight Archive.