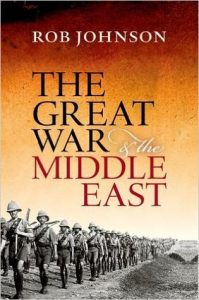 As in any conflict spanning a vast geographic area, the First World War has theaters that have been discussed ad nauseum and theaters that warrant barely a mention in all but the most academic of publications. The Western Front and, more generally, the war in Europe have always constituted the former, while the sub-Saharan African and East Asian theaters are most often the latter. The Middle East falls in an odd area between these two extremes. Certain military operations, like Gallipoli or the Arab Revolt, are no less famous than the Somme or Verdun, yet even I did not know the details of the vast majority of the campaigns that swung back and forth across the sands and mountains of that most ancient of regions. The irony here is thick; the legacies of the First World War and its peace settlements are perhaps most visible in the Middle East, both in its political geography and in the accompanying unrest in the region. Rob Johnson’s The Great War and the Middle East is a valuable corrective to this patchy record, and while Johnson’s prose may not be the most approachable for members of the general public, the information contained within weaves a comprehensive tapestry of the Great War in the Middle East.

Fought from 1914 to 1918, the Great War ballooned from regional squabble to pan-European war to global conflagration. This last expansion was the result almost exclusively of the belligerent powers’ imperial holdings beyond Europe, and perhaps the premier imperial theater was the Middle East. The bulk of the Ottoman Empires efforts were focused there, and Russian, German, and British interests all converged there for reasons of imperial expansion or security. The Suez Canal, Gaza, Palestine, Mesopotamia, the Persian Gulf, Arabia, and of course Gallipoli all witnessed extensive British military operations. Russian and Ottoman forces seesawed across the Caucasus with the Armenian people caught in between, while German agents sought covert access to Britain’s Indian Empire to stir up Muslim unrest. All of these campaigns are described in detail by Johnson, not just on the tactical or strategic level but also on the policy level, with cogent discussions of what means were available to each country to achieve their stated and evolving ends. The result is a military history that interacts seamlessly with political and diplomatic history, explaining why certain decisions were made and debunking the idea of the post-war peace being settled by disinterested and bumbling imperial diplomats half a world away.

For those who have never read anything concerning this theater of the First World War, however, a word of warning: come prepared to puzzle things out. Johnson’s chapters are organized by theater or theme, and while they also progress chronologically, this can lead to events being referenced in passing in one chapter before being fully explained in another. It might even behoove the novice reader to read through Johnson’s final chapter first, as its summary of the events concerned can make his more detailed treatments easier to understand and digest. A directory of historical figures may also be helpful, for as with many military histories Johnson mentions legions of generals and officials in rapid succession as if they were personal friends.

Despite these more advanced historical elements, The Great War and the Middle East does not go so far as to be an impenetrable academic treatise, and I highly recommend it to motivated readers of any level of familiarity with this intricate and fascinating arena of the First World War. Whether you seek to learn more about a particular campaign or perhaps to make more sense of seemingly-incomprehensible current events, Johnson’s work will serve you well.