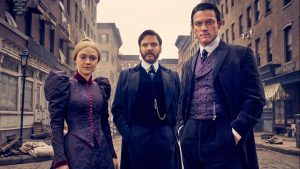 The end of March saw the end of the TNT miniseries event, The Alienist. We had our eyes on the show from its first aired commercial, and tuned in with great interest for ten weeks to see its enigmatic story unfold. Though the show was certainly eye candy for anyone interested in nineteenth-century America, and its story proved just as intriguing as promised, The Alienist as a period piece never proved more than simply competent for our tastes.

Set in 1896 New York City and based on the 1994 novel of the same name, The Alienist follows a team of civilian and police investigators in their efforts to catch what today would be known as a serial killer. Dr. Laszlo Kreizler (Daniel Brühl), the titular character, is a pioneer in the field of psychology and a close personal friend to New York’s commissioner of police, Theodore Roosevelt. When a murderer begins preying on the city’s boy prostitutes, Kreizler and John Moore (Luke Evans), an illustrator for the New York Times, implore Roosevelt to allow them to help find the killer. They are joined in their hunt by Roosevelt’s secretary, Sarah Howard (Dakota Fanning), the first woman to work for the NYPD. Through twists, turns, and revelations, the three pursue the mysterious killer through the urban jungle of Gilded Age New York while puzzling through just what makes a man a murderer.

As alluded to above, the material culture and settings of The Alienist are all praiseworthy in their authentic representation of the period, and the show, as a whole, feels like a window into turn-of-the-century New York City. The police force is suitably very Irish, and while its resistance to and obstruction of Kreizler’s investigation will most likely be read by modern audiences as simply evidence of widespread corruption, it can also serve as a prescient observation that, in its beginnings, the New York Police Department was less a public defense force and more a private security contractor for the rich. Its portrayal of New York’s underbelly, seen mostly through the cross-dressing child prostitutes that make up the killer’s victims, can feel like it’s being used for shock value at times, though the murder scenes themselves are tasteful and never stray into slasher film territory. The various mentally ill characters that appear are also treated respectfully while remaining within nineteenth-century conceptions of psychology. Perhaps a more pressing problem is the choice to tell this story of lower-class suffering entirely through upper-class eyes. The closest to working class that any main character comes is the inclusion of two middle-class Jewish detectives on the team.

Despite these successes, The Alienist could never move from good to great for us. Much of this can be credited to the feeling that the show insists on checking every standard box for a period piece set in Gilded Age New York City. We must have a token Jewish storyline (that proves underdeveloped and irrelevant), a famous historical figure involved in the story line (here Teddy Roosevelt, played by Brian Geraghty, whose performance never transcends a mediocre actor with a vaguely-Rooseveltian mustache), and a ham-handed effort at gender politics portrayed by a woman whose feminist mindset is more 2018 than 1896. Of course there’s a love story, as well, and at one point even a love triangle, which proves unnecessary, unfulfilled in any capacity, and entirely unrelated to the narrative. Even more worrying are the boxes that are not checked or, perhaps, are checked all too often: the series’ only black representation is Kreizler’s manservant, and Kreizler’s Native American ward and servant, Mary Palmer, exists for the sole purpose of slightly humanizing Kreizler and giving us one episode of manpain.

Despite these problems of representation and ahistorical sentiments, The Alienist is certainly enjoyable historical television. Its whodunit is masterfully told, and Brühl, Evans, and Fanning are always a joy to watch on screen (even if Fanning’s affected upper class accent can get annoying at times). For any fans of these three, or of the time period in general, The Alienist should definitely make your list.

One reply on “Checking All the Boxes: TNT’s The Alienist”

Ah I’ve been wondering about your opinions on this. Have any of you read the book it was based on and would that be recommended?