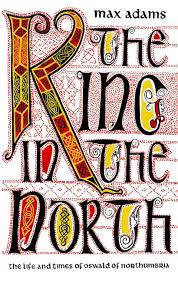 Adams, Max. The King in the North: The Life and Times of Oswald of Northumbria. London: Head of Zeus, 2013.

I was first introduced to the writings of Max Adams through In the Land of Giants, on which Kevin and I will hopefully get around to hosting a book club discussion one of these days. Enchanted by Adams’ compelling prose, especially as it described the elusive world of early medieval Britain, I decided to look up his other works and start from the beginning. That beginning was The King in the North: The Life and Times of Oswald of Northumbria, and Adams did not disappoint with his study of this great Christian martyr and Anglo-Saxon warrior king.

The King in the North follows the life, exploits, and context of one of the formative figures of Anglo-Saxon England: Oswald Iding, prince and, later, king of Northumbria and the first great Christian king in Britain. Exiled as a young child due to the vagaries of Anglo-Saxon dynastic politics and succession warfare, Oswald was raised in the kingdom of Dal Riata as an Irish Christian in the fashion of the great Missionary Columba, founder of the monastery at Iona. Reclaiming his birthright in a masterful dawn attack and claiming divine favor, Oswald would go on to found the second most famous monastery in the British Isles, Lindisfarne, and cement Northumbria not only as a single territorial unit, but as a Christian kingdom that would survive the death of its monarch.

At first glance, The King in the North appears to be one of those popular history books that tells a specific interest story while taking periodic breaks to explain historical context to its readers. Adams’ writing, however, at times seems to lack the necessary organization for such an approach; rather than a clean break, brief aside, then return to the story at hand, The King in the North often veers off into an entire chapter on a topic that seems only tangentially relevant to Oswald. When Oswald’s reign ended two-thirds of the way through, however, I began to realize that I had been wrong; while Adams certainly frames Oswald as the keystone, The King in the North is really a book about its historical context. In passionate detail, Adams constructs the world of seventh-century Britain in as much detail as I’ve ever seen, and the real point of his work is showing how Britain moved from a post-Roman, near-mythological system of short lived tribal chieftaincies to a framework of permanent, Christian, states with rudimentary administrative functions that could preserve territorial integrity after a ruler’s death. Indeed, Adams’ descriptions of the sixth and seventh centuries, drawn primarily from the writings of the medieval historians the Venerable Bede and Nennius, called out for comparison with the more archaeologically-focused narrative of my other beloved early medieval text, Robin Flemming’s Britain After Rome, to align those two interpretations of the British Dark Ages.

By the time I finished The King in the North, I was fully committed to Max Adams as my own historian laureate of early medieval Britain, and I am eagerly looking forward to finish out his trilogy with The Viking Wars soon. I highly recommend The King in the North to any who are looking to learn more about the transformation of European society after Rome’s fall, and, for those who may already be familiar, a dive into Adams’ appendices are well worth the time as he proposed his own theories regarding such historically nerdy topics as place-name etymology and reconciling king lists. No matter your background, The King in the North will give you an excellent window into this otherwise mysterious and little-understood period of history.