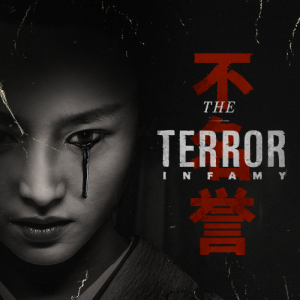 Last spring, Heather and I enjoyed AMC’s somewhat nontraditional historical horror/thriller The Terror (reviewed here on Concerning History). Its story of a British expedition trapped north of the Arctic Circle, struggling to survive the elements even while stalked by a malevolent spirit, was gripping and, well, weird. We were excited to hear that it had been renewed for a second season, though of course this new batch of episodes would need to cover a different story. On board for an anthology series of different period piece horror stories, Heather and I eagerly tuned in.

This second season of The Terror focuses on a family of Japanese immigrants and their experiences during the Second World War and Japanese internment. Its main character, Chester, soon learns that he and those around him are being haunted by some kind of otherwordly force (no spoilers!) that manifests in increasingly physical and fatal ways even as the living navigate their own government’s betrayal of their civil rights. As always, the production value at AMC is phenomenal, and the mix of 1940s Los Angeles and traditional Japanese material culture blends seamlessly in a visual representation of the core themes of the show. Japanese with English subtitles is used whenever appropriate (though this can lead to the season’s at-times glacial pacing–Heather bowed out after the second episode, and I only started becoming invested in episode 5). The core dilemmas of integration versus tradition, young versus old, acquiescence versus defiance that hold true for so many immigrant stories in American history are on full display, highlighted and complicated by supernatural events.

The biggest message of The Terror: Infamy is that the horror we human beings inflict on each other is greater than any kind of spirit or malignant magic. It is the unforgiving streets of Los Angeles that ultimately prove to have created this deadly spirit, and of course it is the camps that lead to so much real existential tension for the majority of the show’s characters. I admire this approach, especially with the closing credits showing the actors alongside pictures of relatives that had been interned (in the case of George Takei, a picture of himself as a child), but for me it didn’t quite land. Japanese internment was undeniably a black mark on our nation, and I would have liked to see even more of its ugly portrayal, but when placed next to the prospect of a decaying, animated corpse kidnapping your wife and attempting to steal your unborn child…yeah. No contest on which is more horrifying

If you can make it through its first few episodes, The Terror: Infamy remains a fascinating watch, however, and I highly recommend it to any fan of this era of history. It showcases stories so often overlooked or made tangential, and its bittersweet ending honestly shows the messy ways in which each person adapts to trauma, both real and fictional, to move on with their lives. I eagerly look forward to what I hope will be a third season to match these first two forays into a promising new subgenre of prestige television.