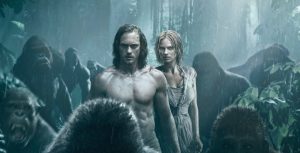 I never had any intention of seeing this movie. I heard about its pending release in 2016, and a live-action Tarzan movie did absolutely nothing for me. Then, one Sunday night in late February of 2019, it came on after another show I had been watching on television, and I just couldn’t look away. In The Legend of Tarzan, I found a compellingly historical tale that spoke to my own interest in the Victorian period, if not an actually good movie.

The first frame of The Legend of Tarzan actually has nothing to do with the famous Victorian man raised by apes. Instead, it informs the audience of the results of the Berlin conference of 1884, where the Great Powers of Europe officially divided up the continent of Africa between them. Seeing as I am an avid student of the late Victorian British empire (and that I had reviewed the Berlin Conference with a student of mine only hours beforehand), I was hooked. As an American, I am perennially starved for movies that deal with this period, and its next sentences pointed to a particularly underserved aspect of the topic: the atrocities committed in the Belgian Congo.

Soon, it became clear that this was not your usual Tarzan movie, either. The Legend of Tarzan is in fact a sequel. Tarzan is no longer Tarzan; he is John Clayton III, Lord Greystoke, living on his ancestral estate with his wife, Jane. John has no wish to return to Africa, but when he is approached by George Washington Williams (played by the ever-delightful Samuel L. Jackson), an African-American doctor, about finding out what exactly is going on in the Congo (“How can a bankrupt king keep the Congo running?”), he agrees to return to the land of his youth. Together with old friends, animal and human, the returned Tarzan and Williams deal a striking blow to Belgian imperialism and lay bare its crimes for the world to see.

Let’s be clear: The Legend of Tarzan is not a great movie. It’s plot is generic and predictable, it falls into damsel-in-distress cliches, and its CGI is not the best. It’s use of history, however, breathes life into what for me would have been a thoroughly forgettable movie. Samuel L. Jackson’s historical George Washington Williams, in particular, brings surprising depth. A freedman who fought in the Union Army during the American Civil War, Williams soon became a Buffalo soldier and Indian fighter. Seeing Williams, who had fought to end slavery in America, fight to end it in the Congo while simultaneously realising that he had participated in the similar annihilation and subjugation of Native American tribes is a fascinating story thread, even if it is approached with a but too much of a modern mindset for the nineteenth century.

Ultimately, The Legend of Tarzan is one of those mediocre films that, through its use of historical context, gains a soft spot in my heart for the effort and attention to something that might not otherwise get the coverage. I do not promise any kind of historical rapture or unique insight, but for those who might like to see Tarzan and an army of animals go up against European imperialism in a cathartic bout of fantasy, this is the movie for you.