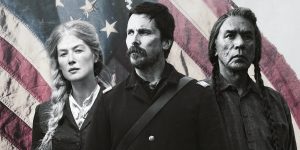 Late last year, I caught wind of a new Western starring Christian Bale entitled Hostiles. I wasn’t able to catch it while it was in the theater, but after hearing positive rumblings about it on the interwebs, I resolved to keep an eye out for whenever it might appear on a more convenient streaming service. I’m happy to say that time has finally come. Prepared for a movie that I had heard was not for the faint of heart, I settled in for what turned out to be a grim story that is either a complicated reflection of historical memory or a simplistic fantasy with an overlay of modern sensibility.

Hostiles follows US Army Captain Joseph Blocker (Bale) on his final mission before retirement. Blocker has garnered a reputation as a brutal man, rumored to take scalps of his own while fighting his Native American adversaries. Now, in 1892, Blocker is ordered by his government to escort Yellow Hawk, a dying Cheyenne chief, and his family from their imprisonment in New Mexico back to their homeland in Montana. Blocker initially refuses, as Yellow Hawk was responsible for the deaths of a number of his friends, but under threat of a court martial and the loss of his pension, he relents. On their journey, Blocker rescues Rosalee Quaid, a settler woman who witnessed her entire family killed by a marauding band of Comanches. The pressures and demands of the wilderness throw these disparate people together in a fight for survival and heritage, and no party comes out the other side the same as they began.

As a film, Hostiles is gorgeous, with a gripping story and beautiful visuals. Bale and the rest of the cast, particularly Rosamund Pike (Rosalee Quaid) and Wes Study (Yellow Hawk), are magnificent, and their costuming nails the look and feel of the period. Indeed, the National Congress of American Indians has even praised the film for its “authentic representation of Native Peoples” and accurate rendition of Native American languages. That being said, Hostiles’ ultimate conclusion may very well strike some viewers as predictable and overly simplistic. Basically, Captain Blocker and Rosalee’s redemption and resolution to fight with and for their Native American companions is a classic case of “It’s hard to hate people once you know them.”

Yet beneath this story is a complex depiction of opposing experiences and points of view on the American frontier. A man with a personal vendetta against those that mutilated his friends. A woman who understandably hates and fears those that look like the people who killed her family. A family who fought to keep their homeland free of invaders. The manner that connections bridge these gaps is intriguing. At one point, Yellow Hawk refers to the marauding Comanche band as “rattlesnake people:” they would attack anyone, even Native Americans, and Yellow Hawk’s contempt for them is clear. This seems to portray Yellow Hawk, and Captain Blocker, as honorable soldiers; yes, they each committed atrocities, but they were fighting for their people, and can reach a mutual respect. These two layers of the story struggle for dominance, and I may have even drawn imaginary connections as I watched, but even now, after weeks of contemplation, I’m still not exactly convinced of the forces that could affect such a profound change in Blocker’s character (other than, of course, the necessities of the plot).

I did have some other, more concrete historical concerns with Hostiles. First, the movie relies on a certain amount of sympathy for Native Americans that I can’t help but feel is ahistorical. 1892 may certainly have seen the seeds of the Progressive movement beginning to sprout, but I have a hard time believing that anyone at that time (six years before the Spanish-American War, in which the US shamelessly pursued a global imperial agenda) would have explicitly stated that Americans’ treatment of native peoples was inhumane, admitting that they were “here first.” Additionally, tropes of ‘good’ natives and ‘bad’ natives is unfortunate, as is the fact that the only native character that escapes the movie alive is Yellow Hawk’s young grandson, Little Bear. Finally, while Little Bear’s adoption by Rosalee (and an implied Blocker) is superficially charming, it gave me unsettling undertones of the horrific Indian Boarding Schools of this same period, especially as Rosalee and Little Bear depart on a train for the eastern seaboard with Little Bear wearing a Western suit in place of the traditional garb he had sported the entire movie.

When all’s said and done, Hostiles provides an entertaining, if unrelenting, story of the American West for both modern and historically discerning audiences. If you’re looking for clear historical themes or lessons, however, you will most likely be disappointed. I have a feeling that the viewer will see what they want to in its story, and must supply the connective tissue themselves for their own satisfaction, or not.