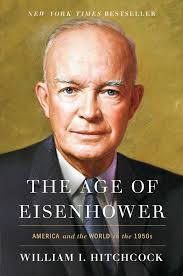 As a student at Gettysburg College and Columbia University, I encountered Dwight Eisenhower time and again at two of the institutions with which he was most closely associated. But given my role this year at the Eisenhower Institute at Gettysburg College, I felt it was finally time to sit down with a biography and read at length about his work and legacy. Published in 2018, William Hitchcock’s The Age of Eisenhower had been recommended to me over the summer as the best single volume on Eisenhower. While I’m not familiar enough with the scholarship to agree or disagree with that statement, I can confirm that the book presents a significant and accessible account of the Eisenhower Presidency.

The title encompasses Hitchcock’s main argument:  Eisenhower was the dominant political figure of the 1950s, both embodying and shaping the decade more than any other public figure. Carried into office by his personal popularity and a backlash against two decades of Democratic administrations, Eisenhower embodied a new brand of Republicanism: modern, pragmatic, and globally-engaged. From infrastructure and Civil Rights to international summits and CIA operations, the Eisenhower Presidency shaped 20th century America in critical ways that remain with us today. And though he came into office with a mandate to champion individual liberty, he did not do so at the expense of America’s least fortunate.

In the Age of Trump, it’s easy to feel nostalgic for the consensus politics of the 1950s and the plain decency of President Eisenhower. Without falling into presentism, however, Hitchcock reminds readers that even in the 1950s some of Eisenhower’s decisions were disappointing, from his tepid (albeit significant) support for Civil Rights to his handling of the U-2 Crisis. Yet as Hitchcock notes, Americans look back on the fifties through the prism of the turbulent sixties. Little wonder that the more uncomfortable parts of the earlier decade fade into a nostalgic mist.

The accessibility of Hitchcock’s work is especially welcome given that Eisenhower’s reputation has long been shaped by journalists and historians who lambasted him for being out of touch and ineffectual because they could not understand his judicious use of power. Hitchcock’s take offers a “middle way” on Eisenhower, acknowledging his triumphs while also engaging with his shortcomings–criticizing Ike without condemning him. For instance, he calls Eisenhower’s blindness to the unintended consequences of covert influence “a failure of moral imagination” but explains it in the context of Ike’s commitment to waging Cold War while pursuing peace. Hitchcock likewise acknowledges that Ike’s consensus politics was often a contradiction but also a testament to his impressive balancing act. Eisenhower was not the perfect president–no such figure exists– but he aspired to make the best decisions he could for his country and on the whole made them well.