Memorial Day weekend 2021 marked one hundred years since the worst act of racial violence in United States history. Over multiple days in 1921, the prosperous black community of Greenwood in Tulsa, Oklahoma was attacked and destroyed by white mobs enraged by black First World War veterans’ efforts to prevent a lynching. This massacre has received new exposure in the last couple years due to its gripping portrayal in HBO’s Watchmen (reviewed here on Concerning History by our own Kevin Lavery). The continuing absence of Tulsa in school curricula throughout the nation makes this subject more pressing than ever, and when we saw that both CNN and the History Channel were airing documentaries on the massacre, we decided to watch them both and record our thoughts here.

In what may come as a surprise, both documentaries (Dreamland: The Burning of Black Wall Street from CNN, Tulsa Burning:The 1921 Race Massacre from History) proved more than competent at covering their shared subject matter. Bryan had worried the History Channel doc in particular might succumb to dramatizations that could have been hokey at best and insensitive at worst, but that was not the case. Both treated the massacre with the gravity and respect it deserves, both interviewed a variety of respectable talking heads (some shared between the two), and both also discussed the ongoing legacy of racial violence in America. That said, only watching one of these excellent documentaries would still leave only a partial understanding of the critical events of 1921; together, they are truly greater than the sum of their parts. 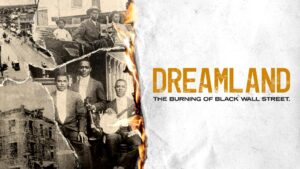 To begin, each documentary takes a different tack with providing context for the rise of Greenwood, aka “Black Wall Street.” Tulsa Burning more traditionally covers Jim Crow and southern political terrorism against black communities. Dreamland, however, covers the specific history of Oklahoma and the freeing of slaves held by Native Americans, which resulted in a the rare occurrence of freed slaves being provided with significant amounts of land that would later develop into generational wealth in Tulsa. Save for one notable instance (see below), coverage of the actual massacre is mostly the same, with minor differences; Dreamland goes into a bit more detail with the original cause (a young black man tripping and accidentally ripping a white woman’s dress in an elevator) while Tulsa Burning relates more in-depth stories of armed black resistance during the events. The biggest difference, however, comes in the discussion of the massacre’s legacy. Dreamland has a very pointed modern story it wants to tell: the fight by local Tulsans to excavate a local cemetery in search of mass graves of the victims of 1921. Ironically, given their respective networks, Tulsa Burning sets its sights much higher. This is where the huge difference in storytelling alluded to above comes in: as the events of the massacre unfold, Tulsa Burning relentlessly exposes the role of the government and police of Tulsa in facilitating the arming of the white mob, deputizing some of its members, and taking no action to prevent its destruction of black property and black life. This theme is pursued to its only possible conclusion: the pernicious survival of officially sanctioned violence towards minorities and the modern movements to defund the police.

What these dueling documentaries result in, therefore, are two separate yet complimentary interpretations of Tulsa through the lens of current events. One is an intimate story of the triumph of a community in search of validation and their own justice; the other is a ringing condemnation of the systemic racism that has plagued America for four centuries and continues to do so today. This past weekend, so illustrious a personage as Tom Hanks wrote an op ed in the New York Times lamenting the absence of Tulsa from his own high school history curriculum and charging the entertainment industry to do a better job representing America’s past in the kinds of media Hanks is known for starring in. Perhaps we can dream of these problems being at least somewhat addressed in our lifetime. When they are, schools could do much worse than including either of these media in their lesson plans, and we encourage you all to pause and watch if you can find an opportunity.