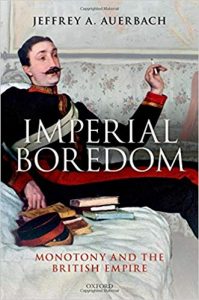 British Empire? Check. My alma mater’s world renowned university press? Check. As soon as I unwrapped Imperial Boredom over Christmas 2018, I was psyched. Here was an aspect of empire seldom talked about: what did it feel like to experience the British Empire on the ground? To settle it, to govern it, to sail or soldier for it? Unexciting, apparently, judging from the title. Of all the books Heather gave me that Christmas, I saved it for last as my grand finale. It was certainly nice to return to familiar material, though in keeping with its subject matter, it perhaps wasn’t as grand a finale as I had originally hoped.

Imperial Boredom is a peculiar little book. Only 190 pages, it reads at the pace of a weightier tome. Best be warned: if the OUP on the jacket didn’t clue you in, this is the very definition of a dense academic monograph. I measured my progress in paragraphs rather than pages. Moving beyond readability, however, Auerbach’s subject matter is at once both illuminating and utterly predictable. “What,” you might say, “you mean to tell me that the everyday tasks of running an empire weren’t exciting? That dealing with issues of irrigation or driving sheep to market in Sydney or filling a dusty garrison without seeing action for years wasn’t the peak of enjoyment?” No indeed they were not, and Auerbach conclusively demonstrates the mind-numbing monotony of the mid nineteenth-century British Empire, focusing particularly on South Africa, India, and Australia.

At first I thought this was one of those necessary-yet-mundane works, the ones that you read and think “Yep, I could have guessed that would be the case, but it’s good to know someone did the legwork and confirmed it in writing.” The key to understanding Imperial Boredom, however, is that Auerbach is not writing to declare that British imperial participants were bored, at least not fully. He is arguing that they became bored, illustrating a process through which the excitement and danger of the early seventeenth- and eighteenth-century empire vanished, to be replaced with dull safety and unmet expectations of adventure. This is best seen in his first chapter, where he argues that a specific period comprising the middle decades of the nineteenth century featured the height of boredom for travelers. After the invention of steam power and larger ships, but before the advent of luxury ocean liners, those sailing to the distant lands of Britain’s Pacific empire found themselves subjected to horrifically long voyages without even some danger to bring spice to life. The nineteenth century is unique, too, in that the expression of boredom as such was allegedly born in this period (boredom being separate from monotony or inactivity in that boredom is the absence of things one wants to do, not necessarily the absence of anything to do at all).

There are many possible implications of this argument, yet Auerbach explores few of them, and explores even less of them fully. Part of this may have to do with his framing method: one chapter on travel by sea, one on art and travel by land, and three for three categories of people: governors, soldiers, and settlers. This leads to much repetition, obscures more fascinating angles like a study exclusively of imperial propaganda, and gives one the feeling that Auerbach’s work is more descriptive than argumentative. Indeed, nearly all of his hard-hitting arguments can be found crammed into the thirteen-page conclusion, which ends with Auerbach proposing, like a high schooler throwing all the historical connections he can into the air, that perhaps the boredom of the British with their empire in the nineteenth century led them to leave it in the twentieth. Intriguing, certainly, but empty conjecture as presented.

Is Imperial Boredom required reading? I would say no, not even if you make a study of the British Empire. If you can work through it, however, it does add some flavor (perhaps stereotypically bland British flavor?) to the lived experience of the largest empire that’s ever existed. May you be less bored reading it than sailing to Australia.